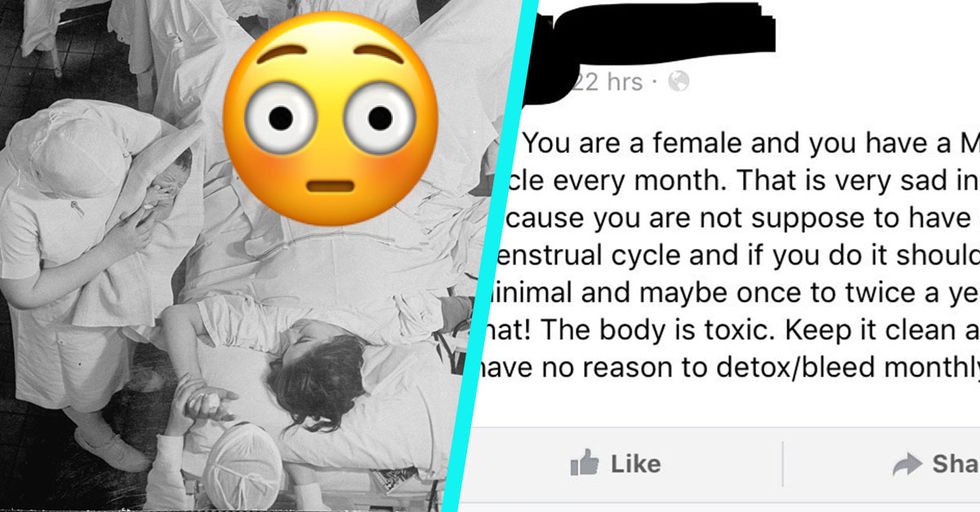 Listen...the human body is complicated. Our bodies do things that sometimes we genuinely can't fathom. And sorry, but unless you're a doctor or medical professional of some kind, you're probably not a genius on the human anatomy.

But then...then there are some people that are just so far off base with how bodies work that you can't help but stop and think, "Are you a real person or are you a robot?" Truly, we're over here fully baffled at some of the things these people think about a woman's body.

This dude that has no idea how a period works.

"I was told by a bloke on Facebook that the blood clots you get while on your period are due to poor hygiene," BuzzFeed community member allysonj419547582 wrote. We can't stop cringing!

Also, this person that thinks periods are toxic.

What's "very sad indeed" is this logic. Let's all just keep our bodies clean and never have a period again! YAY!

This guy who thought that you could only get a woman pregnant if you ejaculated and "really meant it."

"One of my exes didn't know ejaculating in a girl is what caused pregnancy. He said it only worked if you 'really meant it'," tori123445 told BuzzFeed. How many times can we say "yikes"?

Well, he's trying his best. But can you imagine a glass Diva cup? "Ouch" is how we would sum that up. Keep reading for more insane theories...

This girl who didn't realize that the cervix existed.

"I had a FEMALE friend refuse to use tampons because she 'didn't want anything in her uterus'. Completely didn't realize the cervix was a thing. Just thought the vagina went straight up to the uterus," Megan Durham wrote on Facebook. That poor girl.

This girl who didn't think lesbians got periods.

"I’m an open and out lesbian, so it goes with the story. I worked with this girl a few years ago, and I got my period by surprise. I asked her for a tampon, and she was extremely confused. Her response to my question was, 'I thought lesbians didn’t get periods,'" kaseyc412733bf6 told BuzzFeed. THIS IS SO WRONG. THIS IS THE MOST WRONG.

HAS THIS GUY EVER TAKEN A BASIC CHEMISTRY CLASS?

Dear god. How did this text exchange happen? HOW? We're worried for this person.

This guy who believes women can control whether they get pregnant or not.

"I met a guy who said that 'women can control when they get pregnant by accepting or denying the sperm'," BuzzFeed community user fritzfamily2000 wrote. Yes, it's just that easy, isn't it? We're worried for everyone.