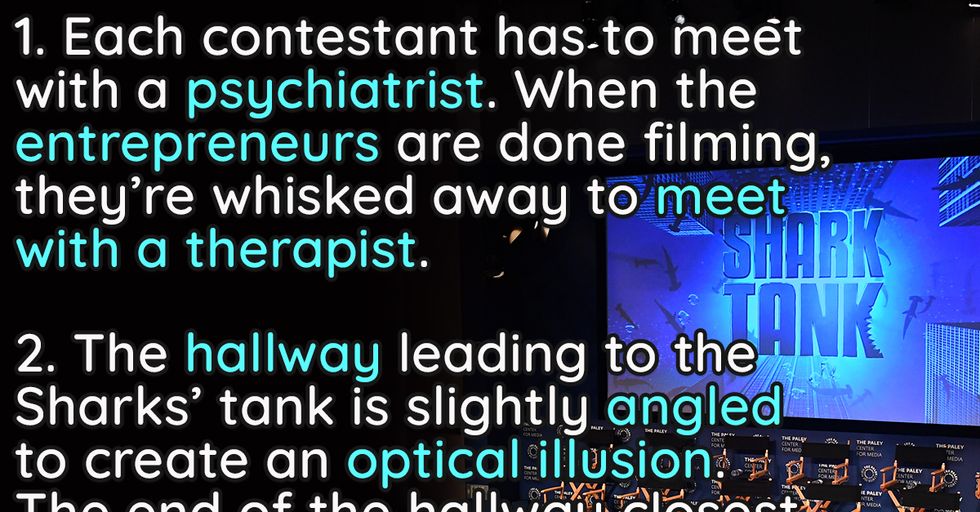 Shark Tank may be TV's most brutal show. Where else can you see people enter a room full of business moguls after having spent all their money and years of their life trying to make their dream into a reality, only to have their hopes dashed to the ground? It's pretty brutal...but also so, so watchable.

Here are 10 fascinating facts about the show.

1. Each contestant has to meet with a psychiatrist.

As soon as the entrepreneurs are done filming, they're whisked away to meet with a psychiatrist to make sure they're OK. Some contestants can take the Sharks' rejection pretty hard, so this is a precautionary measure ensure everyone is taken care of.

2. The hallway leading to the Sharks' tank is slightly angled to create an optical illusion.

The end of the hallway closest to the tank is slightly wider than the entrance. This is to give contestants the feeling of growing smaller as they get closer to the sharks. That way, they're more intimidated.

3. Once you're in the room, you have to remain silent for up to a full minute.

Producers have contestants do an intense "stare-down" with the Sharks where neither party is allowed to say a word. Talk about awkward!

4. Most of the on-air deals don't actually go through.

Contestants who are able to charm the sharks don't necessarily have it made in the shade. Approximately 2/3 of the deals that the entrepreneurs and Sharks agree on don't actually come to fruition.

5. Sometimes the deal doesn't go through because the contestant lied about their company's finances.

However, Mark Cuban has said that most of the deals that fall through are actually due to the contestants dropping out; not the Sharks. So how much do the Sharks actually know about the people who are pitching to them? Not as much as you'd think, actually...

6. The Sharks aren't provided with any info on the contestants, but they do have secret earpieces.

If there's a particularly interesting backstory to one of the contestants, producers will communicate it to the Sharks via those earpieces in order to steer the conversation that way. Other than that, the actual pitch is the first the Sharks hear about any of the individual ideas. (There's something kind of refreshing about that, right?) And speaking of the pitches...

7. A single pitch can go on for more than an hour.

Although the show typically cuts the pitches down to about 10 minutes apiece, contestants can spend a lot of time actually hashing out the details of the deals with the Sharks. One of Mark Cuban's favorite pitches (from the guy who invented the Plate Topper) lasted for two and half hours! That can make for super long and grueling shoot days — sometimes they last for up to 12 hours. In the event that they need to shoot one episode over multiple days, the Sharks have to wear the same clothes two days in a row. That's commitment.

8. The being said, entire seasons of the show are shot very quickly.

One season can be shot in only 17 days! And just think about how rich the Sharks can become in that short amount of time...

9. Even entrepreneurs whose pitches are rejected see a boost in sales.

This phenomenon has attracted some people who show up just for the publicity (the Sharks refer to them as "Shark Tank gold diggers." The producers have apparently started to do a better job of spotting said gold diggers, though. And it's not that huge of a problem, because...

10. You're most likely never going to get on the show.

The vast majority of people who audition for the show are not brought on. In fact, the show is harder to get into than Harvard. The show receives more than 100,000 applications every season. Of those, only 100 slots are filled (and not all of those make it onto TV). Still, if you've got a great idea, why not give it a try?