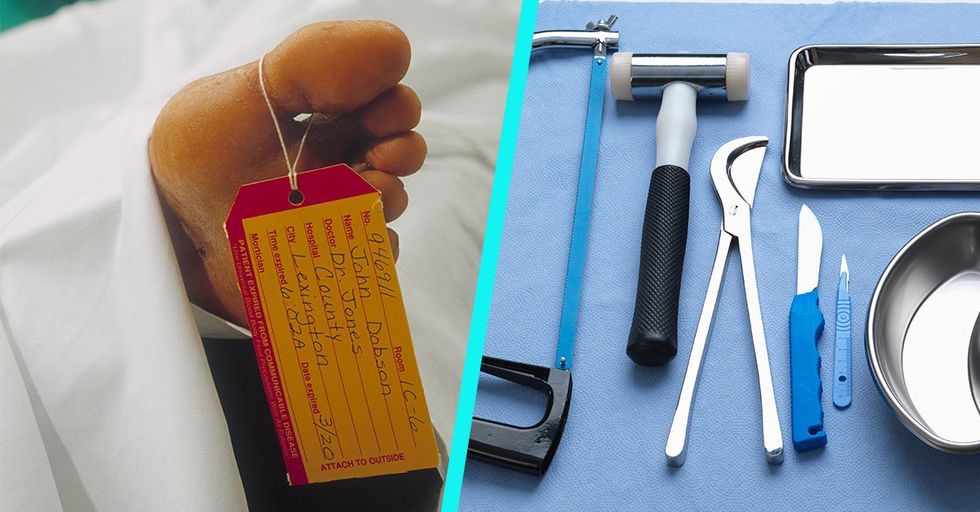 They say there are only two sure things in life: death and taxes.

Well, no one in the world knows anything about taxes, but there are people who know about death. A recent AskReddit thread asked people who regularly work with dead bodies to share some of the behind-the-scenes secrets and as it turns out, there are a lot of 'em.

1. Sometimes, a dead person's eyes will open after they're dead.

We may have our eyes closed when we die, but they don't stay that way. The first time I realized this was around 3am and I had to check something in the morgue. I looked and this dead dude's eyes were looking in my direction. Scared the f**king sh*t out of me. – Wackydetective

2. Some dead bodies appear to breathe and can even make sounds as the air escapes from their lungs.

My uncle used to tell me this story of a friend he had that worked in a morgue. He used to dress the bodies before viewings and there was this one time he was trying to put a coat on this man, so he sat the man up and leaned him over his shoulder while wrapping the coat around him (essentially in a hugging position) and I guess the way the body was leaning let out an air pocket he still had in his lungs and the body let out a slight exhale sounding like he was breathing in his ear. Apparently he quit his job shortly after. – chronicoverdose001

3. That's not the only way air escapes from dead bodies...

Good to know! Now you can worry about inconvenient gas during your life and the afterlife!

4. And farts aren't the only thing you have to worry about.

To prep the body for a funeral they shove a corkscrew plastic buttplug in the deceased to stop any nasty stuff coming out. – Coneman_bongbarian

It’s called a trocar plug. We use ‘em everywhere. Come in lots of varying sizes. Dead people leak. A lot. From everywhere. All sorts of fun fluids.

5. Nail polish is often left on bodies donated to science.

Back when I did human anatomy 101/102 at uni, we dealt with dead bodies and organs ... They keep the nail polish on you that you were wearing when you died, so make sure your nails look fine before you pass and you donate your body to science. The supervisor told us that it helped keep the 'humanity' about the person, to remind us that we should be respectful and this person consented to have their body touched and used in such a way. – strangervisitor

Here's another interesting fact about the way medical students treat the dead bodies they come into contact with...

6. The dead bodies used in classrooms are always treated with the utmost respect.

A friend of mine is a nurse and when they were working with cadavers they were instructed to verbalize everything they were doing and address them as Mr./Ms. Surname. – dazhealy2

7. In fact, sometimes the medical students hold services for the cadavers they used.

My mother-in-law taught anatomy at a med school, and every year the students would hold a funeral service for their cadavers when they were done with them. She took me to the cemetery and showed me the section they had set aside for the med school—it was lovely. – dirkdastardly

8. Urns are filled with the remains of just one person...for the most part.

The process to clean out the crematorium retort between cycles is meager at best. It's swept with a rake and then a rough brush, but it's a porous brick material. The cremated remains of your loved one are definitely mostly them, but probably no more than 98 or 99% and there's definitely carbon matter from other people mixed in. – Edmontostalgia

9. Some people gave facts about dealing with the dead bodies of animals rather than humans. Like this one about what you might find at your local zoo:

I can guarantee any zoo/park/wildlife center you've ever been to has at least one freezer full of dead animals behind the scenes. We have 4. Often we put animals in there with no real idea of what we're going to use them for yet, but as a just in case. Some get used for research, some get taxidermied. We use a lot of taxidermies as educational resources, so students can observe and handle an animal without hurting or stressing a live one. All of our animals are wild, so we don't do any live handling and a taxidermy is a good way around this. Eventually, the taxidermies wear out. They may lose their fur or feathers, bits may break off etc. We repair as many as we can, but eventually their too far gone. In Australia, legislation states taxidermies must be destroyed by combustion. Do you know whats sadder than chucking 15 penguins on a bonfire? Chucking 15 naked and broken penguins on a bonfire. – NipponNiGajin

10. And while we're on the topic of animals:

Your pets will eat you. Seen it 3 times. – deerhuntinghippie

Well then. Good to know.