10 Reality TV Dating Shows You Never Knew About, but Should Be Watching | 22 Words 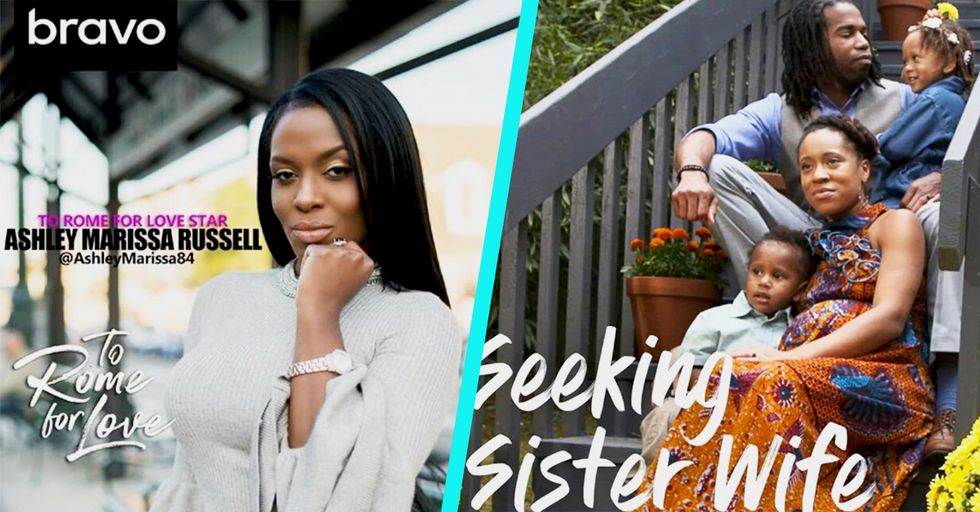 10 Reality TV Dating Shows You Never Knew About, but Should Be Watching

Sure, Monday nights are all about The Bachelor. But there are other nights, and other delightfully messy dating shows to watch out there in the wide world of reality TV. Forget dramatic rose ceremonies - there's polygamy, foreign visas, and forced marriages out there happening right now on our cable networks! (Not to mention even more disastrous TV headed our way this Spring...)

Here's a list of ten reality TV dating shows we're obsessed with, and why you should be too.

If you aren’t watching this gem of a shitshow yet, I have just one question for you: WHY NOT? Please stop reading this, go set your DVR to WEtv for Friday night at 10pm EST, and meet me back here in a sec. Okay – welcome to living your best life. You’re welcome. Reason to watch: From the producers of 90 Day Fiance, camera crews follow six couples who built a relationship while one of them was behind bars. Will their love last beyond the prisoner’s release? Will we find out that the people on the outside are 100% crazier than the inmates? Will an ex-Crip and current Mormon-mother-of-three make the perfect match? Answer: No, Yes, and No. Brilliance.

To Rome for Love (Bravo, Sundays at 9 EST)

Relationship expert Diann Valentine takes five African-American women to Italy who claim to have faced challenges finding a good man, state side. In Rome, our single ladies are presented with Italy’s most eligible – and sometimes most cringeworthy – bachelors. Reason to watch: As we’ve come to expect from Bravo, this is a highly produced piece of eye candy filled with good lighting and beautiful backdrops. But Bravo also knows how to bring the drama – and they don’t disappoint in highlighting the culture clash between the American bachelorettes and their super stereotypical Italian suitors. Also, these women are bound to fight among themselves. As the Bravo gods demand.

Already building a solid cult following, this show follows three “plural families" as they look for/transition a new sister wife into their crazy ass lifestyle. Reason to watch: If you love reality TV, then you love polygamy. Just admit it already. The theme of current-wives-hating-new-wives runs deep, and this show doesn’t disappoint in exploiting this mine field. Also, special shout out to TLC for giving us the first dating show that includes more than two people on a first date. If you like feeling vicariously awkward and skeeved out for one solid hour a week, this show is for you!

Three couples are matched by a team of so-called “experts," forced to marry each after meeting for the first time at the altar, then live with each other for a series of weeks to see if they want to stay together for the long haul or get divorced. It’s essentially the highest stakes date you can ever possibly go on. Reason to watch: A handful of couples have actually stayed married as a result of this show’s experiment. This season, however, it looks glum for all of our couples. Tune in to see bizarre moments like a husband and wife learning each others’ phone numbers for the first time – or the fact that they can’t stand the sight of the other person, period. But whoops! Now they’re married to them. Mazel!

If you’ve ever dreamt about the “one that got away," this docuseries shows you what happens when you find them. British TV personality Cherry Healey hosts this hunt for exes on a worldwide journey that practically requires the services of Interpol. The show promises romantic endings and heartbreak, with some dramatic dead ends to boot. Reason to watch: Stalking is fun.

Circling back to ABC’s Bachelor franchise, this newest spinoff mines the scrap heap of ex-bachelors and bachelorettes from seasons past to “go head-to-head in winter-themed challenges, including the toughest sport of all–love." Bachelor Nation alumns Ryan and Tristan Sutter will be featured, as will our boy Arie. (He’s already packed an extra cardigan.) Reason to watch: Because we know we will. Let’s just hang our heads in collective shame now.

This is my first love, my last love, and the entire reason twitter exists. And viewers agree, piling up near the 2-million mark last year every Sunday night to watch American men and women find love or heartbreak overseas. When they bring their lovers home, the foreigners only have 90 days on their K-1 Visas to get married. Will they follow through with the plan? Or will their American dream turn into a nightmare? (Spoiler alert: Nightmares abound. And they are deliciously epic.) Reason to watch: THIS IS THE BEST SHOW ON TV, period. It’s truly what reality TV was all about before it jumped the shark into over-produced fakery. It is a rare diamond sprinkled with gold dust, and we don’t deserve it. You know what – just go download every past season of it right now and cancel your weekend plans. You won’t be able to look away, I promise.

Imagine being stuck with your god awful Tinder match for an entire vacation. That’s this show. Strangers meet to take “a romantic (and stressful) journey across North America—with the chance to get married at the airport immediately after their final flight lands." Reason to watch: Nothing says “I think I’ll marry this total stranger!" like being forced to slug through TSA checkpoints and go on forced snorkeling excursions. I am here for it.

MTV has built a loyal fan base for this dating game show. The premise of 22 men and women being holed up together while forced to figure out who their perfect match is works on every level. Bonus: They have to determine each other’s matches too! Reason to watch: Real love, real hookups, real messy. It’s all here for the taking. Experts decide who is supposed to be matched with whom, but it’s the contestants who surprise us in the end with who they’re attracted to – and who they want to murder (hint: sometimes it’s their “perfect match.")

Singles who claim they are ready for marriage are placed in a house, then told to find their spouse. Sounds easy enough. Except that, much like in real life, hardly anyone is mutually attracted to one another. In its debut season, two couples actually did get married in the Spouse House, but whether their unions will last back in the real world is still TBD. Reason to watch: This show is cast in Chicago, which gives a very different feel to the players. Some seem genuinely interested in marriage, while others are just trying to get their foot in the reality TV door. The experts transition new cast mates into the house every week, axing the singles who can’t find a match, which keeps the show pacing and chemistry fresh.