Keeping it in the realm of food, this guy seems to regret his decisions. | 22 Words 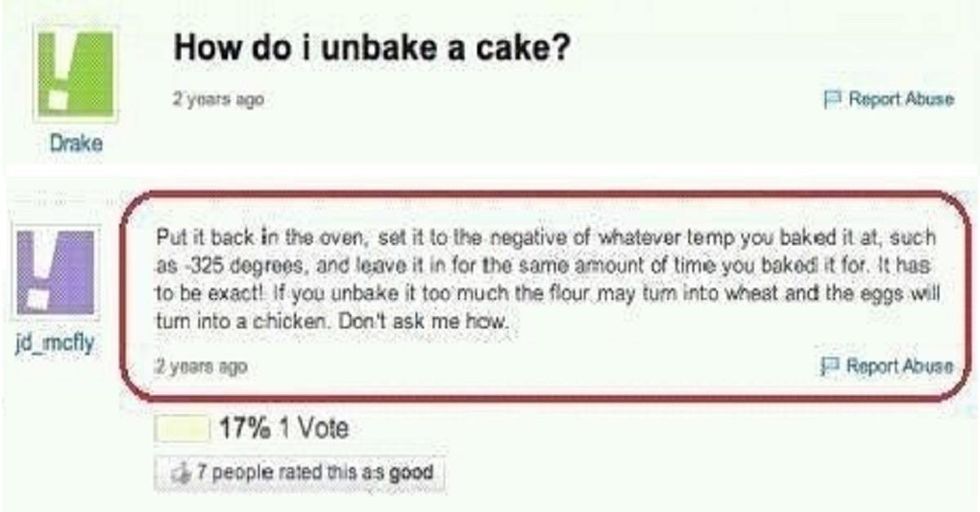 One of the best things about the Internet is the ability to ask seemingly any question and receive an immediate answer. If you're like most people, you've had a question or two to ask the Internet.

Sure, it's convenient and easy, but don't be surprised if you get some nonsense answers like these in response.

Let's start off with a relatively simple question.

The answers seem pretty split. Potatoes do only have two less chromosomes than humans though... so maybe he's onto something here.

Keeping it in the realm of food, this guy seems to regret his decisions.

That's like trying to put toothpaste back in the tube; it simply can't be done. Though one user did offer a pretty creative solution.

If that guy doesn't want his cake, maybe he can help this hungry user out.

The cake guy and the hungry guy need to get together. They would be best friends.

This user had a creative thought that could potentially help world hunger.

You're telling me we can clone sheep, but we don't have burger trees?! Bah.

A lot of people want to know about food for some reason.

Wow. This guy really undersold his own abilities.

This is definitely the best one yet.

That really makes you stop and think for a second... The next time I'm cutting a tomato, there will be some hesitation.

Let's stay with the science questions for a second.

I mean, technically the Earth is always visible from the Earth. So I guess he's not wrong?

This one is just downright weird.

Though I admit the amount of thought put into that is somewhat remarkable.

One loving mother just wants to let her son explore his interests.

Maybe she can hitch a ride back home with Santa Claus if she times her vacation right.

As universal as we thought the Internet was, apparently not everyone gets it yet.

You would need a really big SD card for the whole Internet. That's a lot of cat pictures and memes.