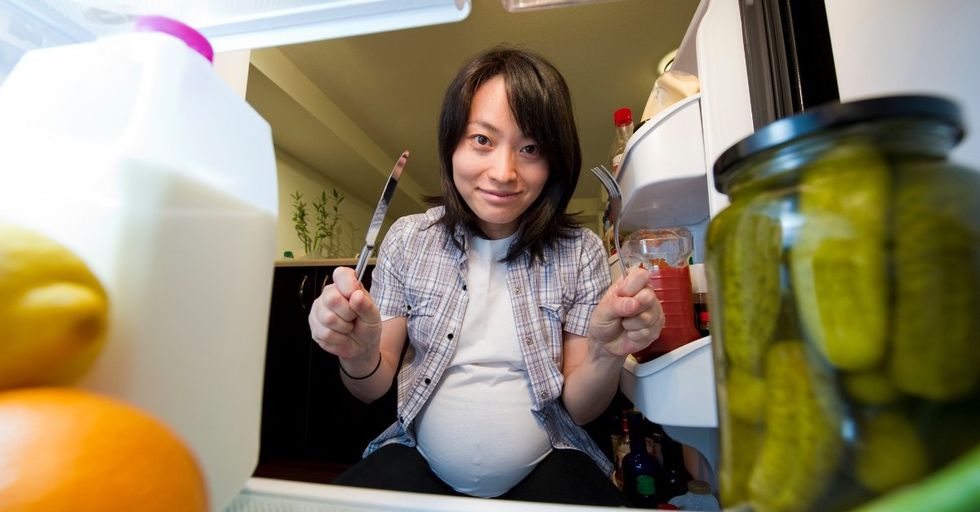 There is no doubt that pregnancy is a time filled with miracles, wonder, and excitement. And anyone who has ever been close to a pregnancy knows that it can also be a time of weirdness, worry, and unmentionable things that we'd rather not discuss in polite company (or ever).

But anyone who has experienced pregnancy firsthand (we're looking at you, ladies) knows that it is mostly a time filled with eating Cinnamon Toast Crunch, hot melted cheese on any available vessel, and just about anything pickled and/or spicy.

Pregnancy cravings are all too real and can be overwhelming. Anything can trigger a craving, and nothing can distract from one.

A pregnant woman is basically an avant-garde food artist. What may seem strange is actually just brilliant creativity at work.

Most of us have had #PregnancyCravings… What’s the strangest pregnancy craving you’ve had? https://t.co/RVuVdflQ5k
— Indi Mamma (@Indi Mamma)1478371816.0

Is that a peanut butter, Nutella, and cookie sandwich? Someone get this woman a trophy. She wins.

Some people crave fresh fruits and vegetables. Most don't.

So I, uh, have this friend who only wanted to eat Dunkin Donuts toasted sesame bagels and cream cheese while she was pregnant. Embarrassed to go to the same drive through multiple times every day, she strategically triangulated the nearest DDs to her house and hit them in a randomized pattern. Many times. Each day. For months. So many bagels. Mmmmm — I mean, she said it was delicious.

Sometimes an expecting mom needs a little support (or permission to give into that powerful craving).

A bag of Doritos for breakfast seems like a perfectly reasonable choice. After all, corn is a vegetable. Cheese is full of nutrition. And triangles are a shape. Children need shapes.

Some food cravings are simple, easy-to-satisfy, and straightforward. Anyone can crave a hotdog!

However, wanting a hotdog so badly that it literally brings you to tears is strictly the domain of pregnant women. Does it sound crazy to you? That's fine. Just go up to a pregnant woman and tell her that she doesn't need a hotdog and that crying over it is unreasonable. Just kidding. Don't do that. You will get injured.

Some "food" cravings are seriously nuts. Let's hope this woman resisted her urges.

Or she could hang out in a laundromat and eat some TUMS. Not all cravings are for food. But as much as dryer sheets can make one woman drool, the same smell can just as easily make another woman vomit. Pregnancy is fun!

But what do you do when you crave imaginary things?

I've never had a hankering for cartoon dishes, but the Mad Hatter does seem to enjoy his saucer. Maybe he's onto something.

Good luck to the partner who brings this woman red or orangey-red or (gasp!) purple juice! When this woman's baby is three and throwing a fit because he or she wants the orange cup and NOT the blue cup, she had better be extra understanding.

This series of messages is basically every pregnant woman.

Over the course of two hours she goes from peppermint patties to Italian nachos, which I didn't know was even a thing. She stops to get ice cream and a needs an ocean view on the way. Who was she sending these to? And what the heck did he finally bring home?

As strong and crazy as pregnancy cravings can be, nothing in the world is more satisfying than fulfilling one.

To witness a pregnant woman finally getting her hands on the coveted food(s) is to witness pure ecstasy. It won't be pretty. She will end up with crumbs in her bra and sauce on her belly, and she will moan while eating it. But don't be fooled by her look of pure satisfaction. Part of her brain is already thinking and strategizing about what to eat next.