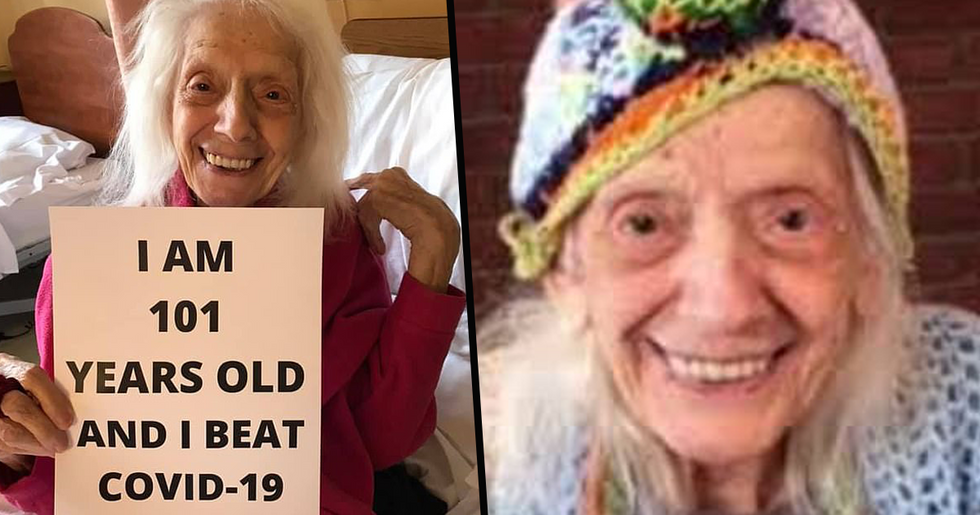 A 101-year-old woman, who has been labeled as "superhuman" by her family, has remarkably beaten the 1918 Spanish flu, cancer, and now the ongoing medical pandemic. It's quite the achievement, isn't it?

Keep scrolling to read Angelina's incredible story, and to hear what she had to say on the current health crisis...

Angelina Friedman is one remarkable woman.

Not only has the New York native defied all odds by beating the ongoing medical pandemic, but she has also lived through the worst pandemic in modern history. Just to refresh your memories...

Back in 1918, decades before the current medical crisis, the world was brought to its knees.

101 years prior to this pandemic, the notorious Spanish flu ripped across the world, infecting and killing millions of people.

The origins of this deadly strain of influenza are still uncertain but, much like the current virus, it was notoriously quick to spread across the globe.

Since December 2019, the deadly virus has been spreading across the world like wildfire and it doesn't seem to be slowing down.

Much like the Spanish flu, this pandemic has caused a global panic.

According to statistics, over 2 million people have now been infected with the virus, and a further 200,000 have died.

But, with the many devastating deaths this pandemic has caused...

There are stories of hope.

And this brings us back to the story of Angelina Friedman.

101-year-old Angelina has been hailed as a "superhuman" by her family for the incredible life she has led.

Angelina was actually born aboard a passenger ship that was shipping immigrants from Italy to New York City during the second wave of the Spanish flu in 1918.

"Her mother died giving birth on the ship, and she was taken care of by her 2 sisters, who were also on board," Friedman’s daughter, Joanne Merola, said to Pix11.

And, despite the risks, an infant Angelina somehow survived the deadly strain of influenza.

And, upon arrival in the U.S, she and her sisters were reunited with their father in Brooklyn, where she was raised.

Angelina, who has now outlived her husband and ten siblings, has defeated many deadly illnesses in her lifetime.

Including miscarriages, cancer, internal bleeding, and sepsis. On her resilience, her daughter explained, "She and my dad had cancer at the same time. She survived. He didn’t."

And now, she has beaten the current medical pandemic.

Nothing will bring this woman down.

After suffering from on-and-off fevers, Angelina was diagnosed with the deadly respiratory virus back in March.

She spent a week in the hospital before returning to isolation in her nursing home. And, on April 20th, she finally tested negative for the virus.

Nurses at her care home are reporting that Angelina is recovering excellently...

And that she is already back on her feet looking for ways to stay occupied. Her daughter explained: "They tell me she’s doing great. She’s up and about as much as possible. She’s looking for wool to crochet with. If my mother could see this I’d tell her, 'You keep going, Ma. You’re gonna outlive us all.'"

Angelina, you're a hero!

On her mother, her daughter concluded: "Everybody in the family lived until at least ninety-five, except one uncle. My mother is a survivor. She is not human. She has superhuman DNA." For more on remarkable survivors, keep scrolling to hear the message a holocaust survivor has for all those complaining about the lockdown...

Man Locks Head in Cage to Try and Stop Smoking