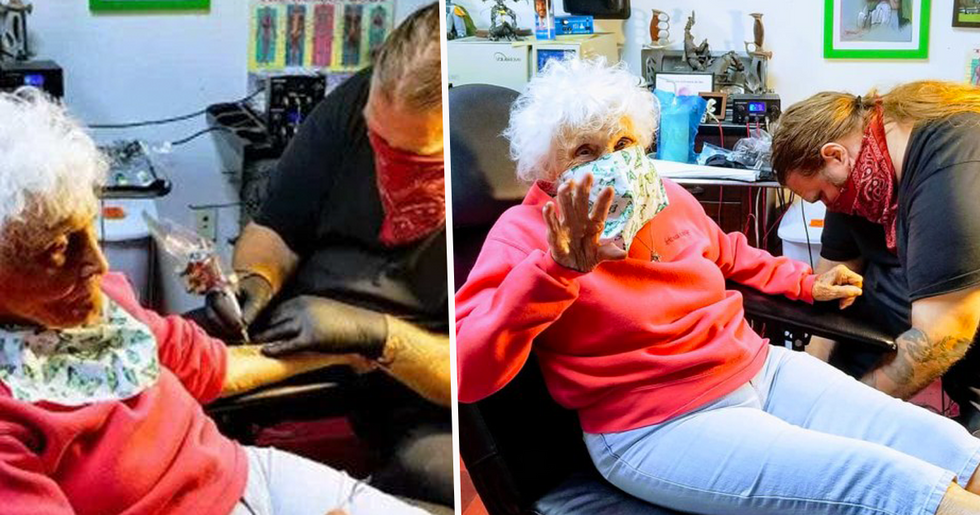 A 103-year-old grandmother has proven that age is just a number after she finally sat down and got her first-ever tattoo... And she certainly didn't hold back with the design.

We all have a bucket list of some sort.

A list of life experiences and achievements, a bucket list captures a person's ultimate wishes and challenges to complete in their lifetime.

Bucket lists can vary dramatically depending on the person...

Most people are pretty adventurous when it comes to writing up their bucket list - Activities such as skydiving, bungee jumping, and Great White Shark diving usually make the top of the list.

And others opt for more scenic experiences.

Rather than hurling themselves out of airplanes, some people would rather experience famous landmarks and natural wonders, such as visiting Paris' Eiffel Tower or the famous canals of Venice.

However, actually completing a bucket list is a lot easier said than done.

Thanks to commitments such as work, study, children, and a whole host of other unpredictable events, it can be difficult actually getting around to doing and seeing the things on our lists.

So, for most of us, our bucket lists simply sit and gather dust over the years...

And remain firmly unticked and uncompleted.

But it's never too late.

The common misconception these days is that you have to achieve all of your dreams and desires by a certain age... And this couldn't be further from the truth.

One woman recently proved this.

103-year-old Dorothy Pollack, from Muskegon, Michigan, decided that there was no time like the present, and went on to tick a huge task off from her bucket list.

Here she is, pictured taking a ride on the back of a Harley Davidson. As you do.

Anyway, one of Dorothy's biggest dreams was to experience getting a tattoo...

So her granddaughter, Teresa Gomez Zavitz-Jones, decided to document her journey into making this dream a reality.

Sitting through a tattoo is no walk in the park.

The whole process involves the skin being pierced by needles thousands of times...

So, for an elderly woman with frail, paper-thin skin, this is a huge commitment.

And, instead, Teresa described her as "giddy" before her appointment.

Dorothy's tattoo venture was her first trip from her nursing home in months...

And the first time she had seen her family since the start of the pandemic.

It turned out to be the most momentous of days...

And, according to Teresa, Dorothy sat like a true champion during her inking.

Sharing the photos of Dorothy at the parlor on Facebook, Teresa wrote:

"Granny is a badass now; sportin that ink. Thank you tons AWOL Custom Tattooing LLC, Ray Reasoner Jr, and your staff for making Granny feel comfortable and like a star. You are amazing."

And, speaking to CNN, he said: "She took it like a champ. She didn’t even wince. I didn’t even see her wince. Maybe she had half a wince once. She was just so excited. It was an amazing experience."

And, on his thoughts of having such an elderly customer, he simply said:

"If someone over a century old tells you to do something for them you just gotta do it."

And this is what she chose to get permanently etched upon her arm.

And why a frog?

Well, Dorothy loves frogs. It's as simple and as pure as that!

Dorothy, you're a legend.