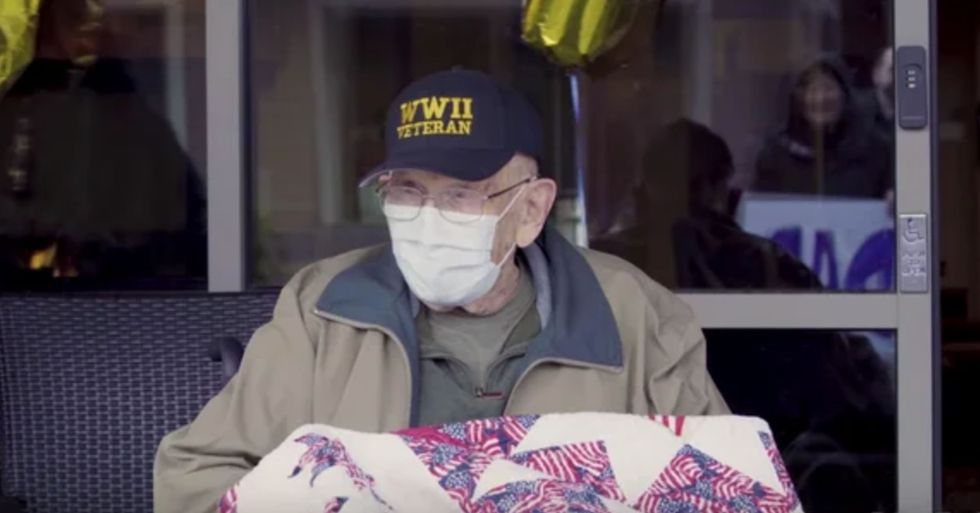 A Second World War veteran, who has remarkably beaten both the 1918 Spanish flu and the current pandemic, has this week celebrated his 104th birthday.

Keep scrolling to read Bill's incredible story, and to hear what he had to say on the current health crisis...

101 years before the current pandemic, the notorious Spanish flu ripped across the world, infecting and killing millions of people.

The origins of this deadly strain of influenza are still uncertain but, much like coronavirus, it was notoriously quick to spread across the globe.

Since December 2019, the coronavirus has been spreading across the world like wildfire and it doesn't seem to be slowing down.

Much like the Spanish flu, the pandemic has caused a global panic.

According to statistics, over a million people have now been infected with the virus, and a further 53,292 have died.

All people over the age of seventy have been told to self-isolate...

And even though this is in their best interest, self-isolation isn't all fun and games.

A lot of elderly people have been isolated from their loved ones and carers.

Which is certainly not ideal for those who struggle to care for themselves and do their day-to-day tasks.

And not only is this self-isolation difficult for the vulnerable...

It is difficult for a person's mental health.

Many elderly people have been left unable to see their families and grandchildren...

And it is truly beginning to take its toll.

However, there is one elderly man staying positive amid this pandemic...

Second World War veteran, Bill Lapschies, from Oregon, lived through the Spanish flu pandemic, the Great Depression and his time in the US Army during the Second World War... So he certainly isn't going to let this one get him down.

Twenty-five days ago, Bill first presented symptoms of the virus...

But it has now been nineteen days since he last had a fever, meaning he could well be the oldest person to ever recover.

And, shortly after making a remarkable recovery from coronavirus, Bill celebrated his 104th birthday.

Socially distanced family, friends, and television crews came together to gather outside the Allworth Veterans' Home in order to wish Bill a very happy birthday.

It is a true achievement for the veteran.

And, when asked by his granddaughter just how he had survived the virus, he simply replied: "I don't know. It just went away. Sit out here and you can get rid of anything."

Staff at the carehome are overjoyed with Bill's recovery...

And, according to Oregon Public Broadcasting, Dr. Rob Richardson, who oversees the care at the home, explained how differently this could have turned out. "This could have easily gone another way. There's not a lot of interventions that can be done."

You can watch a clip from Bill's celebrations here.

For more on the pandemic, keep scrolling to hear what a Holocaust survivor had to say on the matter...