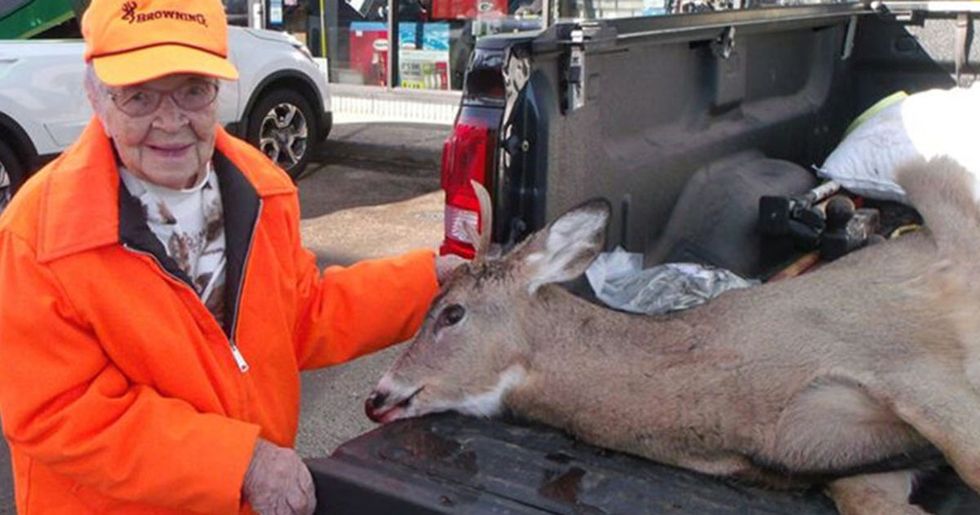 I think when I inevitably hit the ripe old age of 104, I'll spend my days doing essentially what I do now. Bit of working, wishing I had some more cash, spending said cash on fast food and bottles of San Miguel, and waking up with little more than the stench of regret in the room.

What I probably wont be doing, is dillydallying around to get a hunting license so I can blow the face off a deer. But whatever floats your boat.

With that being said, let me introduce you to somebody. Her name is Florence Teeters and what floats her boat is killing animals. Bang bang.

Florence Teeters was born in 1915.

Born at the beginning of WW1, Florence has certainly led a long life. She's gone through WW1 and WW2, as well as Winston Churchill's reign, the career and death of JFK, the moon landing, and so much more.

She was born in Wisconsin.

And Florence has been a proud Wisconsonite her entire long and lengthy life.

She's got a big family too!

It would appear that Florence takes the 'go big or go home' message pretttttty serious and she's the proud mother to five children with some grandkids too!

The mother-of-five apparently became interested in hunting after watching her son out shooting in Price County just last year when she was already a centenarian.

She decided to give it a go herself.

Florence was blown away (excuse the pun) by the hunting experience and decided to give it a go herself.

She became the oldest hunter in Wisconsin.

I'm in my early twenties and I've never hunted a day in my life. So I've no doubt if I was given a rifle, I'd totally screw it up.

But Florence was a total natural.

I guess with age comes... well whatever, something good anyway. Wisdom? Inner strength? What I'm trying to say is Florence was real good at hunting and was wowing hunters even half her age with her skills.

She returned home with one kill.

Apparently her son noticed a deer approaching before letting Florence know. When he told her, she got the deer in her sights and took the shot.

Her youngest son spoke out about the hunting trip.

I took mom out to the blind this year. I had a nice chair for her and it was nice and warm. A little after 4pm, a buck shows up about 30 yards away. I tapped her on the knee and I pointed. She nodded and smiled and was real quiet. Then she took the shot!

It's likely to be the first of many.

The Wisconsin Department of Natural Resources then dedicated a post to Florence on their Facebook page. In the post they confirmed that she is absolutely the ‘oldest person to date to purchase a gun deer license and harvest a deer’.

Florence Teeters is 100% that deer hunter. This mother of five got her first buck on her first hunting trip ever this year. Did we mention she’s 104-years-old? But who’s counting – She sure isn’t. And yep, DNR confirms Florence Teeters is the oldest person to date to purchase a gun deer license and harvest a deer.

This isn't the first extreme thing Florence has done.

Oh hell no, Florence has took part in loads of extreme sports and activities such as zip-lining at her old age! Is there anything Florence can't do?

Whatever your views are on hunting.

It's pretty damn impressive what Florence has done with her life.

We wish her all the best.

Let's hope that she enjoys many more healthy years of living her best life.