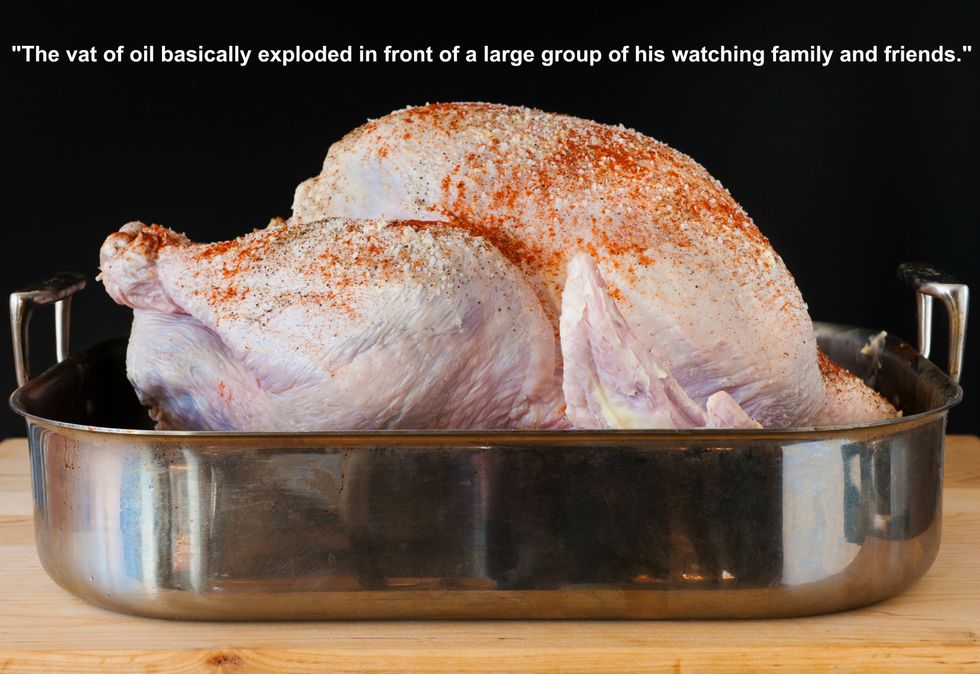 11 Thanksgiving Horror Stories to Get You Into the Holiday Spirit

Thanksgiving is the one day of the year where we reconnect with family and friends while gorging ourselves on enough food and drink to feed a small country.

But sometimes, the combination of too much alcohol and contrasting personalities can result in one big holiday meltdown, and while they may not be fun to experience, they're VERY entertaining to hear about.

So sit back, relax, and take pleasure in the fact that while your Turkey Day might not be perfect, it could be much, much worse.

"As a paramedic holidays were not something guaranteed. I worked my share of them. Anyway, one year I was working thanksgiving and for the most part it was pretty quiet until we get a request by police to respond to the scene of a domestic situation."

"[An] argument becomes heated, fists begin to fly between the men. Women are screaming at the men to stop it. One of the women grabs her purse and takes out her pepper spray and proceeds to pepper spray the men who are fighting. Another woman grabs her own spray and sprays the first woman. This was all done while still around the table. Another person at the table calls the police. By the time the police arrive the fight has stopped but now there are 3 people with pepper spray in their eyes, the dinner is ruined and others are leaving. Happy Thanksgiving!"-tobusytocare

"I host Thanksgiving for my parents, sisters and their families. My sisters don't cook much so I spent two days preparing and cooking for about 15 people."

"I had appetizers and desserts in addition to the main traditional T-day meal. I make sure the place settings are beautiful with table decorations, the works. We sat down to eat and I had forgotten to make the dressing. One of my sisters went on and on about how it isn't Thanksgiving without dressing so I got up from the meal while everyone else was eating and made the fucking dressing. I sat down after and said, 'I didn't spend two days cooking for the only thing you will remember about this meal is that I didn't make dressing.' It was the quietest meal I've ever sat through."-daisy5x5

"My inlaws are terrible cooks and my MIL is easily stressed. To avoid the stress, she cooked everything two weeks ago, froze all the food, then reheated in the microwave just before eating."

"We're talking leathery ham pieces soaking it pools of fat, bland turkey with messed up texture from being frozen, mashed potatoes with chunky globs of cream cheese and cream of mushroom straight from the can spooned on top of green beans with onions thrown on top, no mixing, no heating in the oven. Other meals have consisted of expired ingredients and on-the-edge rotten produce. We "took a walk" and went to the gas station to eat a hot dog."-ilmwa

"Not me but I read about a guy that tried to deep fry a turkey that was not fully thawed."

"The vat of oil basically exploded in front of a large group of his watching family and friends. He and others got some third degree burns and the flying, hot oil hit his new car and caused a lot of the paint to peel off. Tldr don't try to deep fry a frozen turkey!"-NoCommentsYaDingus

"I went with to a bf's house and spent the morning with his family, brothers and sisters and their SOs from far away."

"His grandmother was there, sitting quietly in a recliner and not saying much. After a couple hours dinner was ready so we all went into the dining room except his Grandma. Someone went back to help her, thinking she had trouble getting out of her chair, and discovered that she had died sometime while we were all sitting around talking and laughing. Someone called an ambulance and the bf's parents went with the body while the rest of us had a very odd and awkward dinner."-DeniseDeNephew

"The night before Thanksgiving, we were helping prepare dinner at my grandfather's apartment in New York."

"His then girlfriend was there helping us cook. My grandfather learned that the place we were ordering part of our dinner from had messed up, and we weren't getting cranberry sauce. My grandfather, who had a temper, threw a fit and was yelling at the man on the phone. His girlfriend tried to calm him down, and he yelled at her. They got in a screaming match, which ended with her taking the turkey, out of the oven, and outside the apartment with her. We ended up eating at a crummy Chinese Restaurant on Thanksgiving."-ElderCunningham

"My crazy sorta-boyfriend-at-the-time called and said he was coming over, and I told him no, so he said he was going to come beat the shit out of me."

"I answered the door and told him to leave, and when he didn't, I threw a beer bottle at his head. He finally left with some encouragement from my dad, then called the cops and said I attacked him."-itsashleybro

"I laid down after dinner."

"I was pretty tired but more so than usual after a big meal. Some cousins were sitting on the ground playing with the cat below the couch I was laying on. I puked on all 3 of them, the couch and myself. I only have two cousins btw...the third was the cat."-ImALoneWolfBaby

"My mother had a complete meltdown moments before our guests arrived."

"I don't even remember what set her off, but she grabbed the edge of the table and just tipped it right the fuck over. Dented the new fridge, food went everywhere..it was a mess. Every dish we were having was now on the carpeted floor, minus the rolls because they were in the oven. I was maybe 11 or 12 and she demanded that I clean it up NOW. My stepdad grabbed my arm and dragged me to the barn. We sat on straw bales until she calmed down."-katgib13

"We're all gathered at my folks' house Thanksgiving morning when my little brother downed a fifth of JB, hopped into his truck, and took off before anyone noticed he was gone."

And, finally, the most horrifying Thanksgiving tragedy to ever occur:

"We ran out of stuffing."-French87 Here's hoping your Thanksgiving is filled with good food, well-behaved family members, and plenty of liquor.