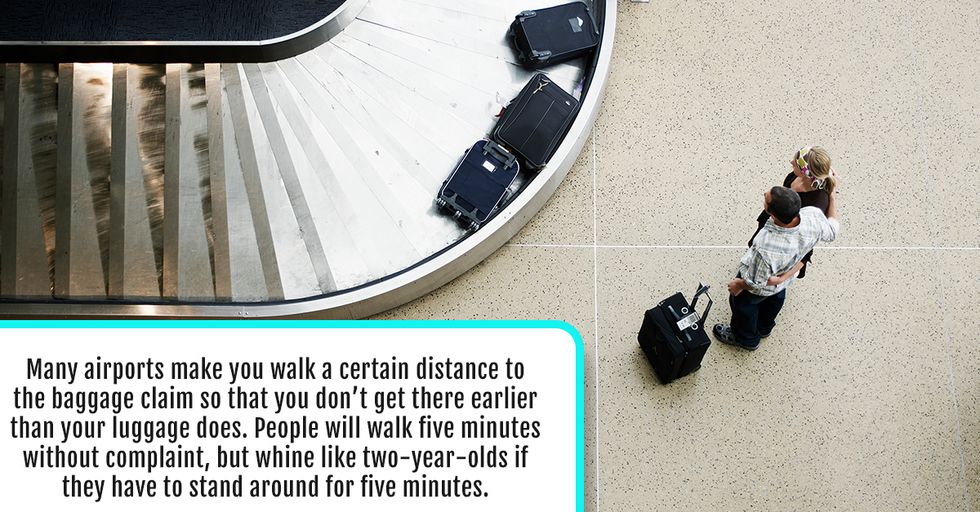 11 Things That Were Designed Purely Because of Human Stupidity

This is a fact.

Even the smartest among us has our dumb moments, which means a lot of companies have to spend a lot of money making things idiot-proof so that we don't hurt ourselves or others.

Here are 11 products engineers had to build to account for the dumbness of humans.

I used to work in a building where the air ducts and air diffusers were originally designed to be almost completely silent. Well apparently when the building opened a lot of tenants complained that the air wasn't working. While it was working fine, they couldn't hear it and assumed it wasn't running. The building ended up putting these sound boxes in the ceiling near every diffuser to simulate the sound of air blowing.

There's such a thing as TOO advanced. No, literally, the silence modification to the air conditioners was much too complex for the building's workers, hence the downgrade. Next time, just stick with a regular air conditioner.

Putting barriers at railroad crossings that block the whole road and not just the directional lane, because even with lights flashing and barriers down people still think they can drive around the gates and beat the train. I’ve been on scene for some pretty nasty cleanups because people didn’t want to wait an extra 5 minutes for a train to pass.

It seems like a given to wait for the train, right? But you'd be surprised just how many people literally cannot hold their horses.

SlothMaestro69 says that "the reason an ATM gives you your card back before your cash is because you'd just grab the cash and forget your card. Silly humans..."
Silly humans indeed, but one thing here is definitely true – people almost never leave cash at the ATM. Money is essential to life.

Doubledaffy888 explains,
To be fair, most websites with any kind of progress bars are like this. In reality, the computer has already calculated. It's just taking time to load, so it gives a progress bar to make humans feel less impatient.

Nagol93 has this to say about dial tones:

If you work in an office, chances are you have an IP desk phone (the ones that use a network cable). Now if you pick it up you will hear a 'dial tone' or some other white noise. That's completely artificial, its just an audio file the phone goes out of its way to play for you. Why? Normally the phones are silent but the first company that popularized then (I think it was Cisco) kept getting complaints that the phones were "broken" because there was no dial tone. So they just slapped some white noise on the phones, and people stopped complaining.

This makes complete sense. It's sort of eerie to pick up a phone and not hear anything, so we understand why engineers would make a dial tone.

[...] originally box cake mix at the grocery store only needed water added to it and nothing else. People wouldn't buy it because it didn't "feel" like they were actually making a cake. So they decided to make it so the consumer had to add an egg and some oil.

This blew our minds, and it goes even further than this. There's a reason why packaged cakes and other baking products require three ingredients - water, eggs and oil. Human beings love the number three, and said three ingredients are the most common in homes.

Turns out there's a good reason many power paper cutters require two hands to operate. As SuzQP explains, "this is to prevent the accidental amputation of the operator's hand."
Super cool! But also very frightening. Seriously, how dumb are we as a species that we have to make this kind of fail safe?

A lot of large scale manufacturing companies use this two button system for running an operation on a machine. It is mainly for safety concerns. Another cool way they have idiot-proof machines is adding a safety curtain. Basically its an infrared sensor that will make the machine shut off when something brakes its plane (hands, fingers, their head). They want people to leave work with the same amount of fingers as they showed up with.

If you see parts made out of brass, 9 times out of 10, it's designed to be broken. Basically, when something fucks up, instead of having something expensive break, they put that in to break first. Also, the power plugs on a PlayStation. Kudos to Sony, nobody is going to fuck that up. EDIT: To clarify, with the PlayStation AC adapter, I meant the end that plugs into the console. What I was pointing out is that it's not only impossible to plug that in the wrong way around, but also that it's very clear to the end user that they are making the mistake. Also, they're designed so that if you trip over them, the cable will break before the socket in your console.

That is literally amazing, and also super eye-opening. To think that there are certain things designed to break so others won't. Mind blowing.

Did you realize that baggage claims are a way to account for human impatience? As TsukaiSutete1 explains,

Many airports make you walk a certain distance to the baggage claim so that you don't get there earlier than your luggage does. People will walk five minutes without complaint, but whine like two-year-olds if they have to stand around for five minutes.

Amazing! But we can't help but wonder what this says about us as a species...

11. Buttons in the cockpit

I did some work for the pilot training department ("ground school") of a major US airline based in Atlanta. They told us on the equipment we were providing to be sure that the buttons couldn't be removed and there weren't any gaps, because the pilots - who at this level were making probably $100K+ in the early 90's - would steal the buttons and fill any gaps with pieces of paper they didn't need. According to them, at one point there was a cockpit fire because after a flight the pilots would shove their flight plan into a gap in the instrument panel on their plane. Moral is everyone, not just the general public, is shitty. Edit: to be clear, the story on the flight plans was that after the flight, to dispose of their paper flight plan, they'd just shove it into a crack in the instrument panel and let it drop in and disappear. They weren't lacking a clipboard, they were lacking a garbage can.