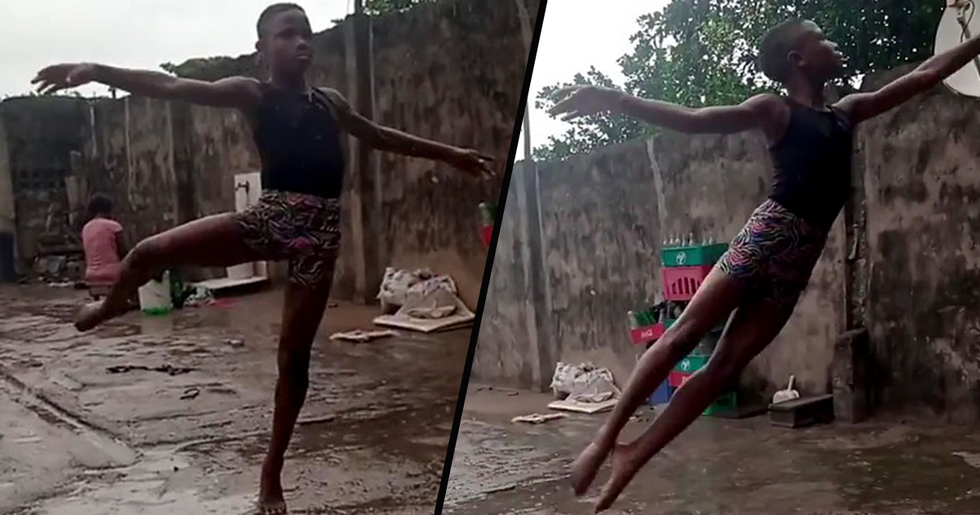 One eleven-year-old boy's viral video has landed him the most exciting opportunity of his life.

The young boy from Nigeria has been scouted by a prestigious dance school in New York, giving him the most unexpected surprise...

This year got off to a pretty bad start.

But for one boy, this has turned into the best year of his life.

After a top dance school saw his moving, barefoot performance.

Dance is considered the ultimate form of expression.

Celebrated throughout the ages.

Ballet, in particular, is wrongly considered a feminine activity.

Something which men are rarely associated with.

But an eleven-year-old boy from Nigeria as come to set the record straight.

After his recent post showing him dancing in the rain barefoot.

It didn't take long for the video to go viral.

Earning him a scholarship to a prestigious summer school here in the US.

The video was originally shared by his dance school.

Which is called Leap of Dance Academy in Nigeria near to where the boy lives.

And obviously the video went viral...

Racking up hundreds of thousands of views, likes, and comments.

With people mesmerized by the boy’s undiscovered talent.

Luckily for him, Cynthia Harvey was one of the viewers...

Harvey is the artistic director of New York’s ABT Jacqueline Kennedy Onassis School of Dance.

Harvey said: “A friend who lives in the UK sent me the video, within a day I was trying to find him."

And fortunately, she succeeded in tracking Anthony down.

But it didn't stop there, she offered him a scholarship to a three-week intensive summer workshop at her dance school.

His school in Lagos was founded in 2017 by Daniel Ajala Owoseni, who is Anthony’s teacher.

Sadly, the school still doesn’t have a proper space for its 12 students, even after being up and running for 3 years.

Which is why most of the time students practice in Owoseni’s own basement.

As well as public spaces around the building.

Although they are hoping this will change soon.

“We are trying to change stereotypes around ballet dance. Boys can actually do ballet," the teacher said.

He is determined to challenge stereotypes.

“Male ballet dancing is here to stay and it is not only supposed to be for females."

“The main goal for our school is to have our students represent ballet in Nigeria."

There has been an outpouring of support for Anthony and his future in the performance industry.

Everyone is rooting for him.

And after his first performance, it's not hard to see why...

Clearly he already has a natural affinity for dance.

One that will surely blossom during this new venture.

“Anthony is currently in ABT virtual summer intensive"

Anthony's dance teacher was ecstatic with the news. “It made us just feel very overwhelmed and grateful. We can not believe our eyes, and the outpouring of support, sometimes we think we’re dreaming. God has been so gracious to us by providing all these things. Anthony is very excited and has always been a hard worker, so he is happy to continue working towards his dreams and have this opportunity. Anthony is currently in ABT virtual summer intensive. The main goal for our school is to have our students represent ballet in Nigeria well and bring it to the forefront while showing the elegance of ballet, but also letting our culture shine through."