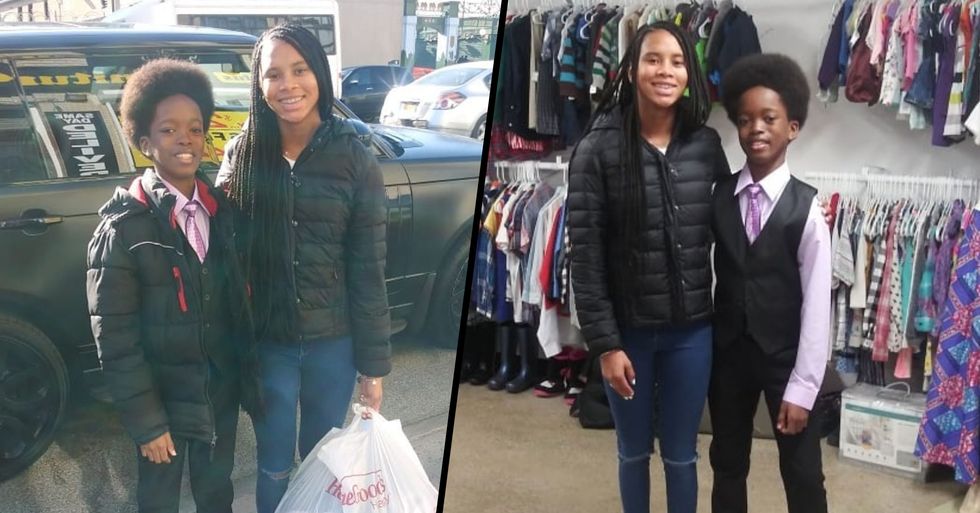 There are some pretty inspiring people in the world, but how many of them do you expect to be children?

Not a lot? Well, you'd be wrong in thinking that.

From Marley Dias to Greta Thunberg to Malala Yousafzai the world is full of young people trying to do good.

And now there's another one.

Keep reading to find out more about one 11-year-old who is helping out those in need.

As a child, our focus was on having fun and playing with friends.

Spending your school holidays in your friend's garden having a water fight.

But for some children, they already have dreams to chase.

A plan for the future or idea to help the environment.

Take Greta Thunberg for example, at just 15-years-old she began spending her school days stood in front of the Swedish Parliament in a call for stronger action on climate change.

Now 17, she has received 2 nominations for the Nobel Peace Prize and was included in the Forbes list of The Worlds 100 Most Powerful Women.

And Malala, when she was just 11-12 she began writing a blog for the BBC Urda detailing of her life during the Taliban occupation of Swat.

Since then she has co-authored a book, I Am Malala, featured as one of the most influential people globally by Time Magazine and she now studies at Lady Margret Hall in Oxford.

And that's not even just the start of them!

There are so many talented children helping the planet.

And now there is one more.

An 11-year-old entrepreneur from New York.

Obocho Peters is a fifth-grader on a mission to help low-income families save money on clothes.

Whilst still stressing the importance of education.

Obocho's idea began when he went to see "Avengers: Infinity War" and wanted the toys characters to play with afterward.

But when he asked his mom for them, she told him she couldn't afford them.

So he did what not many other 11-year-olds might think to do.

And started raising the money to buy the toys himself by selling his old clothes.

Then, that was the start of all the ideas.

Selling his clothes made Obocho realize that he probably wasn't the only kid around who couldn't afford some things.

So he decided he wanted to help.

ABC News reports that Obocho said: "I was inspired by all the superheroes helping to make the world a better place."

He added: "I wanted to be a hero myself by helping my mom."

Doesn't that make your heart melt!

Obocho began by setting up an Instagram page called @obohosclosest, where he accepted clothing and shoe donations.

He then resells them at a price that is always under $10.

A proportion of that money is then used to give back.

One way is that he puts it towards holding free seminars for parents to learn the best way to save money ready for college.

For the work of the online store, Obocho was honored in June 2019 as part of Brooklyn Borough President Eric Adams' "Heroes of the Month".

An award that celebrates people for their bravery, selflessness and service.

Now a few months later, Obocho has gone one step further than his online store.

As he now has his own shop which opened on his 11th birthday.

Prior to the shop opening, Obocho had set up in his local discount store Bargain Land which helped his business to grow.

He also attended events, selling items as a vendor.

But now with a little help from the community, he has a shop to call his own.

After receiving donations from the community and raising more than $10,000 on his GoFundMe campaign he was able to afford a shop.

The shop, located in Brooklyn's Flatbush neighborhood, aims to make it easier for shoppers.

It now allows customers to browse in-store and also pick their online orders up from there.

Through the whole process, Obocho's mum Sasha Peters has been supporting him the whole way.

And as you can imagine, she is very proud of his successes.

Sasha, who is a single parent, believes that a parent's investment into their children's dreams plays a big part in their child's success.

Speaking to ABC News she said, "You have to nurture kids when they come up with ideas and you have to pay attention to everything they say because they're telling you how to groom them to be a better version of themselves."

She says that one of the things she is most proud of is her son's personal growth.

She recalls him as previously being a 'shy kid', but now he has completely come out of his shell.

Sasha plays a big part in helping her son with his business as she helps to operate his social media and build his brand.

She has also registered him for after school business classes in order to help build his entrepreneurial skills.

Sasha helps her son out alongside following dreams of her own as she recently quit her job in the hope of becoming a fashion designer.

We can only wait and see what he will do next!