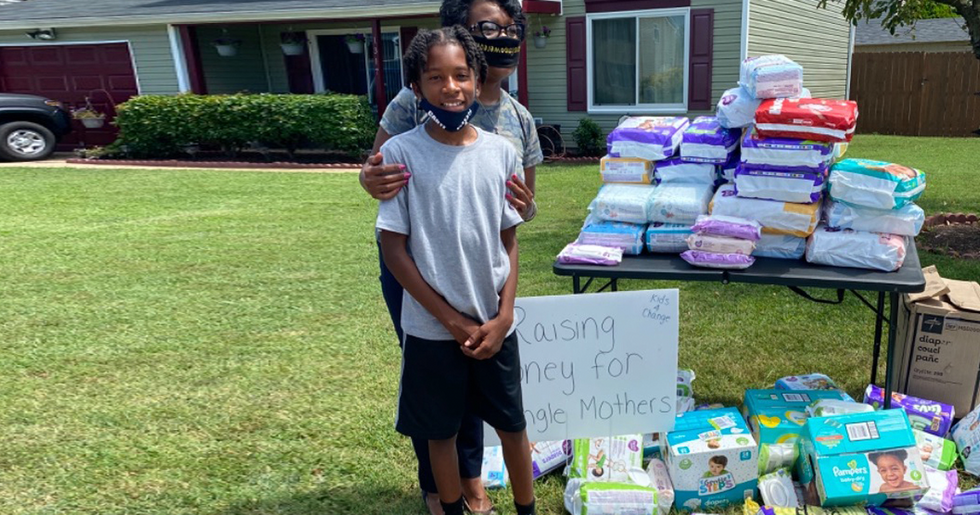 A thoughtful eleven-year-old boy has gone viral this week for his incredible gesture to all the single mothers out there...

This pandemic has brought America to its knees.

Since the outbreak of the coronavirus at the start of the year, our country - and the rest of the world - has been brought to a total standstill.

Unemployment numbers are at an all-time high...

And our food banks are being stretched to their limits.

As a result of the pandemic, thousands of families across the country are struggling to make ends meet...

And some are even finding it difficult to feed their children.

So can you imagine how difficult this has been for all the single mothers out there?

Statistics have proven that single-parent households are amongst the hardest hit in this pandemic.

With the schools closed, many single parents have found that they are unable to work...

And, on top of these financial worries, they are faced with the additional stress of looking after their children single-handedly.

Most daycare services had to close their doors during the pandemic...

Which left single moms in a precarious situation.

It has been an unthinkably difficult time for America's single moms...

But, luckily, one little boy is coming to the rescue.

This eleven-year-old boy from Hampton, VA, noticed the strain the pandemic had put on families, especially single-parent households.

So he decided to extend a helping hand.

The thoughtful sixth-grader decided to do something that would raise money for these struggling parents.

With the help of his friends and family, Cartier decided to set up a lemonade stall in his neighborhood, selling the drink along with a whole host of other tasty treats.

Cartier advertised his stall on his Kids 4 Change 757 Instagram page.

Around a year ago, he founded the non-profit, Kids 4 Change 757, a youth organization born from his desire to help the homeless.

The organization helps individuals in need around the community...

And has been known for creating care packages called "Carti packs," filled with deodorant, toothbrushes, and hand warmers to give to the homeless population.

So what better place to help out the struggling moms in his neighborhood, too?

With the money made from selling the lemonade and treats, Cartier was able to buy essentials such as diapers, baby clothes, and baby wipes.

And, in addition to donating these supplies to different shelters...

Cartier and his family even drove an hour out to Richmond to hand-deliver some of the care packages.

The impact his actions have had upon struggling single moms is remarkable...

And he posted a video of a grateful and tearful mother hugging and thanking him for his thoughtfulness.

At the time of writing, his lemonade stall has managed to buy $4,500 worth of essential supplies...

Which, of course, has helped so many struggling mothers.

Appearing on Live with Kelly and Ryan, Cartier said on his motives:

"I just wanted to raise money and spread awareness about single mothers that are struggling during this pandemic."

"They’re doing everything on their own so I decided to help."

And, of course, his mom is indescribably proud.

"He doesn't want to spend any of the money on himself," Britany Stewart, his mom, told CNN. "He just wants to continue to keep buying diapers and giving each day."

A GoFundMe has been set up to take donations for his stall...

And, so far, it has surpassed $5,000. If you'd like to donate, you can do so here. Cartier, you're amazing! For more heartwarming stories, keep scrolling to read about the young boy who opened up his own thrift shop to help families in need...