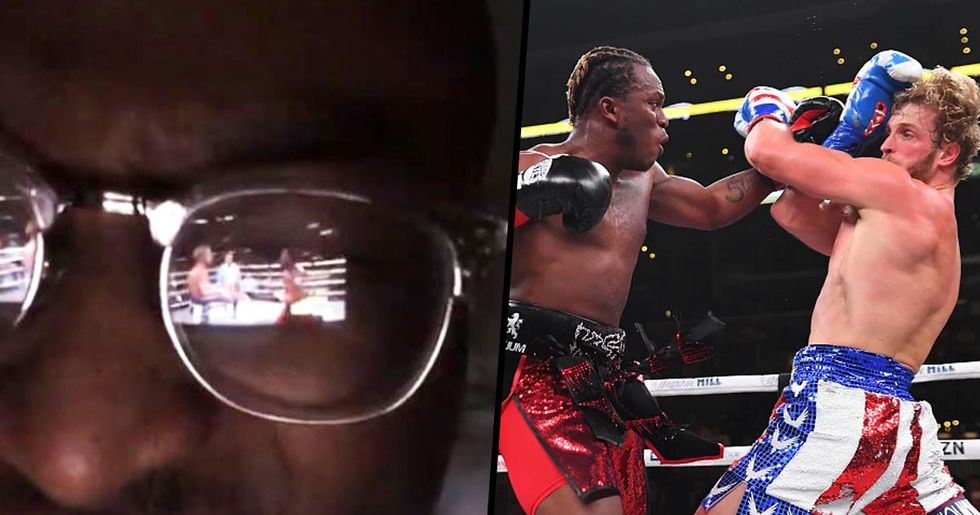 If you've been anywhere near the internet over the last couple of days, whether you like it or not, you'll probably be aware that KSI and Logan Paul had their long-awaited YouTube boxing rematch over the weekend.

The pair's ongoing differences have become an internet obsession, and thousands have tuned in to watch them fight it out. But, one downside was that viewers had to pay $19.99 per month or $99.99 for an annual subscription to sports streaming service, DAZN, to watch the match unfold. So, as you'd imagine, many tried their luck at watching illegal streams online for free - many of which were quickly removed for violating copyright.

But one man found a creative and hilarious way of streaming the fight for free without setting off YouTube's copyright sensors... through the reflection in his glasses. And his ingenious efforts paid off - attracting a whopping 11,000 viewers.

Keep scrolling to see what the result of Saturday's fight was as well and the creative way one fan illegally streamed the fight on YouTube.

But there are some things that he has done for fame that many found unforgivable...

The Youtuber has had his fair share of controversies within recent years. In fact, his channel's sole purpose seems to be stirring up controversy, actually. Logan's videos include radical stunts, distasteful jokes, and the charm of what one would call, "an entitled frat boy."

And what about KSI?

KSI is a.... well, yeah you guessed it, he's a YouTuber too. He's also ventured into the world of rapping and has essentially developed into an all-round internet personality.

Born as, Olajide Olayinka Williams 'JJ' Olatunji, he goes by the name of KSIOlajideBT on YouTube and made a name for himself posting commentary videos of Fifa.

As of October 2019, KSI has received over 20 million subscribers and 4 billion video views, which ranks him as the sixth-most subscribed and nineteenth-most viewed YouTuber from the United Kingdom. These staggering statistics also place him among the top 120 most subscribed channels on the site.

But who'd win in a fight?

It's that age-old question, isn't it? You can have all the subscribers in the world but in the words of Bugsy Malone's suspiciously young boxing gym owner friend: "Can you punch like a south-bound train?" You might as well quit if you haven't got it.

Billed as the biggest event in YouTube history, the stage was set in Manchester, United Kingdom, where KSI 'The Nightmare' and Logan 'The Maverick' Paul were set to end their bad blood! But... it was actually a pretty dull draw.

So what does that mean?

It's time for redemption. Time to prove yourself. Time to end this petty foolery nonsense once and for all. And that's exactly what KSI 'The Nightmare' did. Albeit following a split decision.

The fight took place in LA.

November 9. Staples Center, Los Angeles. 9 pm. A time and a date which will no doubt go down in the history books. Why's that? Because this is when they finally got to business. Scheduled for 6 3-minute rounds fighting at Cruiserweight, KSI reigned victorious after a relatively impressive performance.

It was a split decision victory.

The first four rounds of the fight were a total domination job by KSI who landed far more punches and overall just seemed much more like the aggressor. In round four Logan got his chance and landed a smashing uppercut on the Brit which sent him hurtling down to the canvas.

But Paul made one BIG mistake.

Instead of fighting properly, Paul opted to fight dirty, and as KSI was falling down, he decided to throw another two shots. One to the back of his head, and another as he finally hit the canvas. In what would've been a 10-8 round for Paul, he actually had two points deducted.

Following the fight, the pair embraced and Paul seemed to agree that the result was accurate. Their differences will continue, however. With Paul looking for another fight with KSI, and KSI claiming that it is done.

Thousands tuned in to watch the long-anticipated rematch.

Which, of course, led many trying to pirate the match so people could watch for free.

YouTube, however, was quick to take down the illegal streaming footage.

But one viewer found a creative way around this...

He filmed himself watching the event while wearing glasses, which subsequently reflected his screen - meaning anyone watching his YouTube stream could watch the fight unfold through the reflection in his glasses.

It also meant he'd found a loophole for any copyright issues.

He managed to stream the fight without alerting the site's copyright sensors. You have to admit, not only is it very creative but it's hugely impressive that he even managed to think of the idea.

I can not put into words how hilarious I find it that a guy streamed KSI vs Logan Paul to an incredibly large numbe… https://t.co/viHU9TSBVa
— Erica Claus (@Erica Claus)1573419094.0

And people quickly took to Twitter to spread the word about the unusual stream...

It seems many people found it utterly hilarious. "So my friend watched the KSI vs Logan Paul fight through someone’s glasses, and I've never laughed so hard in my life," wrote one user.

Sadly, the stream has now mysteriously disappeared from YouTube.

KSI's and Paul's reps are yet to release the official streaming figures.

Though their first match, last year, brought in an estimated, eye-watering $11 million in revenue. That's some big bucks.

As for KSI and Logan Paul? Who knows what the future will hold.

Though we anticipate a lucrative sponsorship deal will most probably follow.