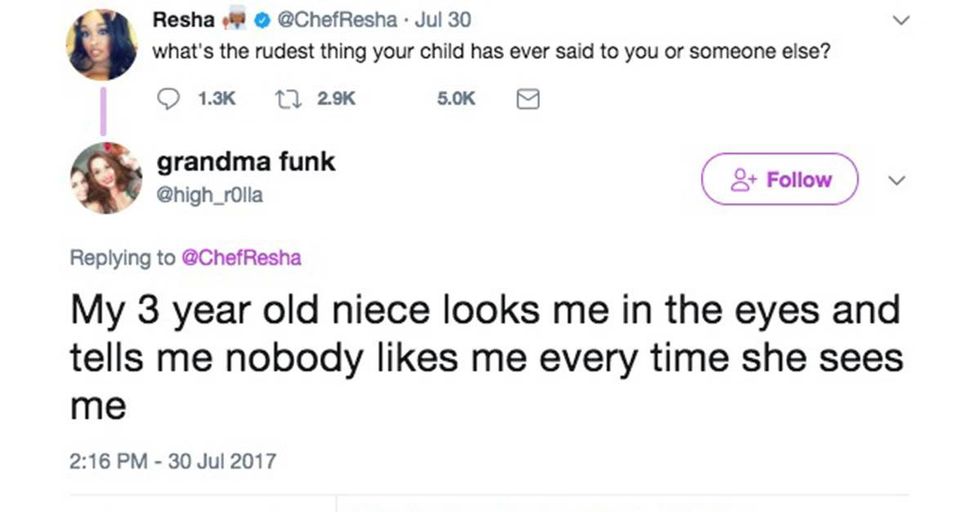 Most of the time when children are referenced by adults, it's in response to their "purity" or "innocence."

Well, sometimes that's hogwash. Children can be (and often are) hilariously cruel to adults, mostly because that "purity" and "innocence" means you have to assume the insults are unintentional.

Can a child make you cry? Whether you're cry-laughing or just straight sobbing, imagine you're on the receiving end of these takedowns and see how you'd respond.

Here's how it started.

Maybe she'd get an interesting story or two, right? Well, she got a LOT more than you'd think. Here are just a few of the more savage responses.

"Cover up that face, Mama."

Many times, we see that kids are trying to be helpful but it comes out wrong. So very, very wrong.

Some people were just DYING to unload.

One story at a time, even if you've got dozens. Also, sorry you're so constantly verbally abused by small children.

Sounds like this kid's got a few things to say. Maybe they can schedule a talk when the parents are done...partying at a wedding.

Wow. You might want to curb your kid's stereotyping if they're pulling this stuff!

That's grounds for a talk. That could get worse.

Is this kid being rude?

Or are they just a little TOO adept at the inner workings of street justice? Either way, might wanna rein them in a little.

No filter. No chill. Completely hilarious. Kids don't worry about stepping on toes.

They won't let a little progress let you get complacent.

It sounds like this successful dieter might still have a ways to go, at least as far as this kid's concerned. Ouch.

Sometimes a kid can be so harsh that you just have to cut them out of your life.

I mean, you wouldn't put up with an adult who gave you this kind of grief, now would you?

Eh, kinda. This one's not TOO far off.

Explain that the person in question is just a HUMAN with a ROBOT ARM. I'm guessing that won't be the end of the conversation.

I would put up with that precisely ONE time. Any more than that and we would officially have a feud going. I'm not above feuding with a child.

This is actually pretty relatable.

Even the most polite kids will lose their cool when it comes to gifts. Oh well. They'll get better, won't they? WON'T THEY?