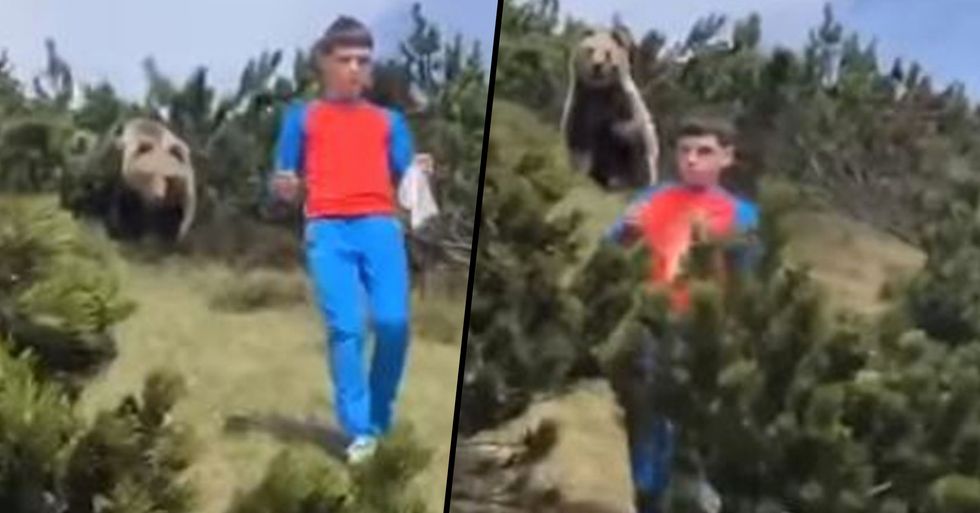 Terrifying footage has emerged of a 12-year-old boy being stalked by a bear, but he reacted in the best possible way to save his own life.

Well, this was recently the reality for a twelve-year-old boy in Italy and amazingly, he handled the situation like a total pro.

Bears have a better sense of smell than dogs and they love humans' food.

However, one young boy has recently defied these odds.

Footage has emerged from Italy of a twelve-year-old boy narrowly avoiding a deadly encounter with a huge brown bear, and it is truly nail-biting to watch.

The young boy is called Alessandro...

And on May 24th, he was enjoying a camping trip with his mom and dad in Malga Nuova, which is in the Trentino region of Italy.

Whilst his dad was filming their hike, he spotted a brown bear stalking his son.

This is a terrifying situation that many would deal with using panic and fear, but Alessandro's dad had a bright idea.

He is heard speaking to Alessandro calmy...

And the young boy is seen very slowly taking steps forward and looking towards his dad for reassurance.

It is unbelievably tense to witness...

And when Alessandro turns to look behind him, the bear continues to follow him persistently.

At one point, the bear is seen to stand on its hind legs.

When a bear stands up, this means that they're curious about the situation and they're trying to get a better look. Seeing the bear standing seems to panic Alessandro, but his dad insists on him staying calm and moving slowly.

But thankfully, the creature displayed no signs of aggression - which includes huffing, swaying of the head, snorting, and laid-back ears.

At one point, Alessandro's mom is heard crying out...

But the young boy and his dad both hastily shush her in order to not startle the bear, who is continuing to look on in curiosity.

But Alessandro's calm and slow behavior paid off...

As the bear eventually lost interest and ran away in the hills.

The family is incredibly lucky...

Firstly, because the bear didn't seem to be showing any signs of aggression at all. If it was, this would have been a completely different story.

Alessandro and his dad did everything correctly. They both stayed very calm, and most importantly, they didn't run - running away from a bear will only prompt it to chase after you, so slow and careful steps ensure the bear won't be surprised or startled.

Let's hope that the family won't have to ever encounter something as terrifying again. Keep scrolling to read about the circus bears who finally experienced the taste of freedom for the very first time...