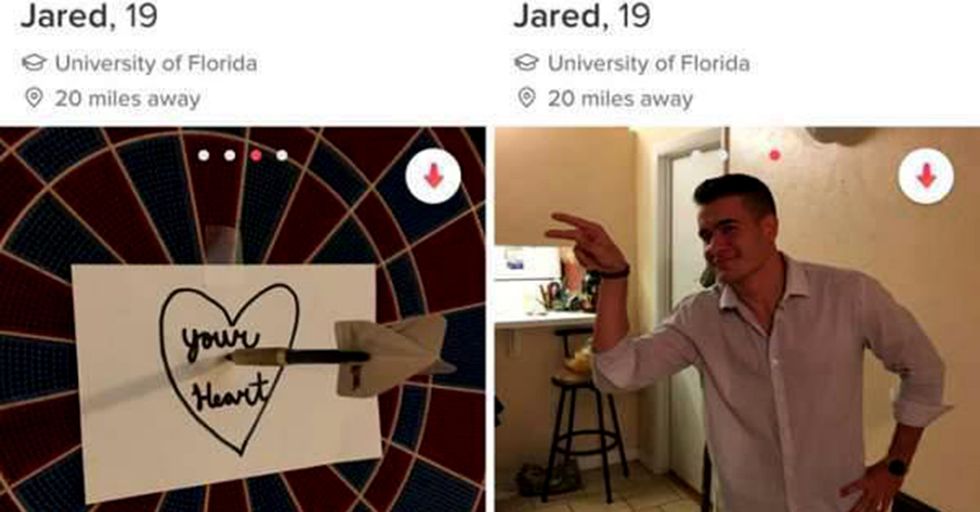 Tinder's a pretty crowded marketplace these days, so to really make in impact and an impression (good or bad), you need to take a risk.

Of course, the thing about risks is...they don't always work out. Sure, there might be someone out there who's charmed by these witty profiles, but many more users will just be terrified and swipe left to find themselves in greener pastures.

Well, I guess when you've got a body and pose as majestic as this one, you can get away with being direct with your wants and desires. Any takers?

Well, this is very direct, and SLIGHTLY clever, but I shudder to think of the type of person who is looking for an opening line that's THIS to-the-point, even with the wit.

Kevin's bio is short, but it conveys puh-lenty of info. He's a simple man, but what's really got me fixated is the dot on his collar, rather than the quirky profile description.

Well, Christian is clearly going goofy to make a girl laugh. Maybe it will work, or maybe Ms. Right is looking for someone with a little more confidence and a little less self-deprecation. Only time will tell, Christian.

Brandon sure knows how to charm his way into the conversation. Beyond the eyebrow-raising statement, he took a selfie with a herd of cattle. Good or bad, that's a hard image to forget.

Ok. Melissa's not a guy, but she clearly has no issue playing one on the app to get your attention. Also aiding in her attention-getting: a photo of bleach blonde Guy Fieri and a blazingly bright bowling shirt.

Judging from the bio and the submissive pose, Ed's the type of guy who believes in managing expectations. He's a white 6/10. If that does it for you, track him down and say hi.

James is taking weirdness a little too far, perhaps. We get it. You're a free spirit who says ridiculous things, James. Also, a pic of you smoking is likely to turn off about 80% of the dating pool. Just so you know...

Jared's put some thought into this. He also looks like a normal, well-dressed, and somewhat well-adjusted dude, so the little photo stunt probably isn't some crazy act of desperation. But who knows until you meet him?

Straight. To the point. Alton's not just about romance. Save him, ladies. He needs a hero.

No. You had a good profile pic, but a kidnapping joke (and an unfunny one, at that) as your opening line? No way, sir. Wasted effort.

If any of Adam's facts resonate with you, he might be the one. However, it's just as likely that something he just listed offended you, but that's a risk he was willing to take.

His reputation proceeds him. In case you're not familiar with his work, he's laid it all out. The camping, the outdoors, the insinuation (but not outright advertisement) of violence. Might you be his Mrs. Vorhees?