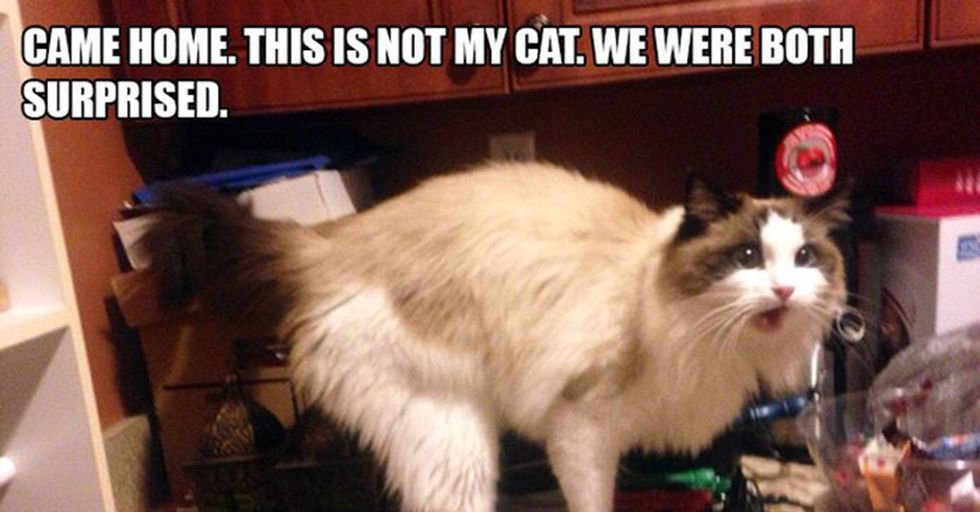 13 Hilarious Times Cats Just Invited Themselves Over To Strangers' Homes

We all know that cats have no problem making themselves at home in their owners' houses, but sometimes they get so adventurous and curious that they make themselves in strangers' places as well. Check out the pics and see how little they care about where they show up.

This one's more cute than troublesome. At least these guys are staying outside. Hopefully the human fed them. I would love to see this out my window every day.

That cat probably was living a very nice existence...

...until his space was invaded by, you know, the homeowner. (As an aside: How scary would it be to reach for a towel and find this?)

That's not one cat. That's not even a family. That's like, a TOWN of stray cats. Maybe you should reconsider storing tuna cans under your porch.

*jumps in car through the window* "Let's roll. You're driving." You have to respect this guy's moxie.

...the fact that this happened at 5:30 AM is the most troubling part, but it totally is. How are these people not scared into cardiac arrest when they see stuff like this?

Whether they like it or not, they're now running a pop-up restaurant for stray cats. I hope they get good press, because this thing could become a BIG success.

"Hey! Quiet over there on the stairs. I'm just a kitten trying to unwind by watching some hockey, and you're making quite a ruckus."

I don' think this cat suffers from intimacy issues.

Maybe it just wants to be loved. At least this dude isn't objecting! Everyone should wake up with a cat on their lap once in a while. Even if it's not yours.

I bet they'll look back on this moment in a decade over some cold beers and just laugh and laugh about the wacky misunderstanding.

You know what the worst would be?

Getting invaded by a stray cat who proceeds to knock all your bottles and glasses off of ledges like a jerk. Which this cat totally looks like it's about to do.

I have to admit, this would be a fun little exercise. How frustrating would it be if they never found the cat? I hope they found it and kept it for themselves if they couldn't find the owner. They could name it "Footprints."

I think that IS how you get a cat.

The cat's staring way off in the distance, evaluating its life choices. "I can't keep blacking out and waking up in people's homes. Something has to change."

Just because it can't see you...

...doesn't mean that you can't see it trying its best to blend into the scenery. It's not doing a great job, but it's the effort that counts, right?