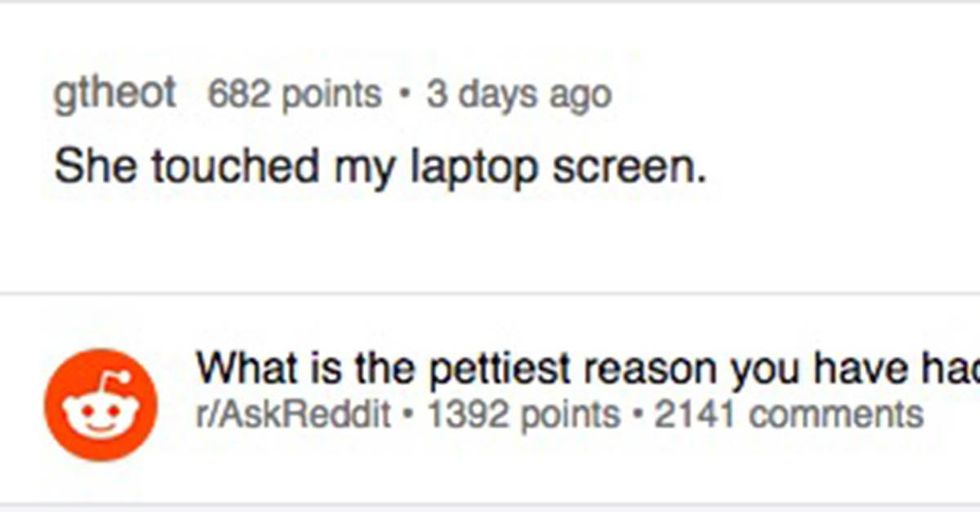 Relationships end. It's a fact of life and, when they do, it's not always for some huge dramatic reason. In fact, sometimes it's for the dumbest reason you could ever imagine.

But you've never seen lame reasons like this before. A person on Reddit recently asked what the dumbest, most nonsense reason people have used for killing a relationship and...you won't be disappointed.

Wow. We're starting off with a bang.

Or, rather, a whimper. How tired would you have to be to just kill a relationship? Obviously, with all of these responses, there are other factors at play, but marvel at the straw that broke the camel's back.

Can we chalk this up to "anger issues?"

Because "She yelled at the sky once" doesn't quite have the same compelling effect.

The little things matter, and considering how many texts fly back and forth, this could be a big problem. But maybe talk to him about it first?

A third date isn't really a relationship, but if it makes you uncomfortable, why go on?

Ok. This is a petty reason why someone else broke up with YOU, but it's still worth including.

So, uh, she's crazy. Who likes stuffed animals that much when they're at a dating age?

There's a much simpler way to put this.

If your relationship consists of watching YouTube videos at his house, that might be a sign that you're not living your best life with this guy. We could leave it at that.

Statements like this are pretty hard to get past.

This would haunt me, too. What else doesn't she know? Does she confuse Louis and Neil Armstrong, too?

Totally, 100% his fault. (Not really.) I love that she's blaming him for something that's so obviously normal and natural.

Well, you could have probably framed it a little more softly.

But if she almost killed you, then a Walmart parking lot seems to be the right place to pull the trigger.

"She's better than me at video games."

You know, that would be a selling point for a lot of dudes. Not this guy, apparently.

If someone's kind of messing with the way you plan out your day, and they won't take the hint, they might not be enriching your life.

Ok. Let's end on a SUPER petty one.

Geez. Lighten up, dude. Especially if you want to have kids one day.