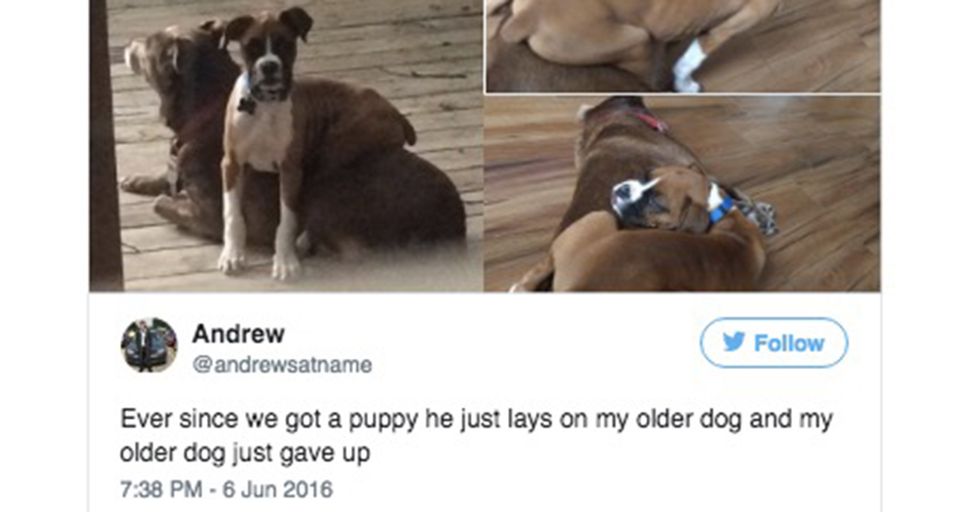 Sure, dogs are, almost always, cute and charming. As these pics will show, even when they're being completely selfish a-holes, they still manage to be funny and adorable. If only people could learn that trick.

Check out the hilarious pics below and see just how much bad behavior dogs can get away with thanks to how cute they are.

Sure, this dog COULD sit anywhere it wanted.

But sitting elsewhere wouldn't have the added benefit of bothering this big older dog, now would it?

I'm not sure if this pup is going to scare any criminals away.

But it's bound to draw such a big crowd around the window that there will be too much attention on the house to break in!

Unless this pup has some serious recessive genes, it's in a state of denial.

That's cool. A good parent is a good parent, biological or not. Just don't let the dog know!

Whoa! These dogs get DIRTY when the humans are out!

In every sense of the word. Hopefully, they at least cleaned up after their weird little party.

This dog rides in the front seat, thankyouverymuch.

Well, that dog looks like it's set in its ways, so I don't see any point in arguing.

What kind of dog refuses to go on a walk?

Look at how dramatic this pup gets before finally jailbreaking and just heading home.

Sometimes they get a little...co-dependent.

Oh well. The upside is that this is the cutest thing you'll see in the history of your life.

This dog won't be contained.

With hops like that, this puppy needs to find its way to a frisbee league or something. Put those talents to good use!

Then there's this passive aggressive approach.

This might be the most human behavior in the whole bunch. Just stare until people ask you what's wrong!

"Must we discuss this again?"

I'm sure it wasn't funny for the owner, but for a bystander that would be hilarious!

I guess there's no reason why you can't develop your own sense of flair in this realm as well.

That dog is so suspicious and nosey. What's not to like? It's like an old person, only (slightly) furrier.

Well, at least ONE of these two dogs has manners.

I assume if you own the bathing dog, you have to apologize the same way you would if your kid bites another kid at the playground.