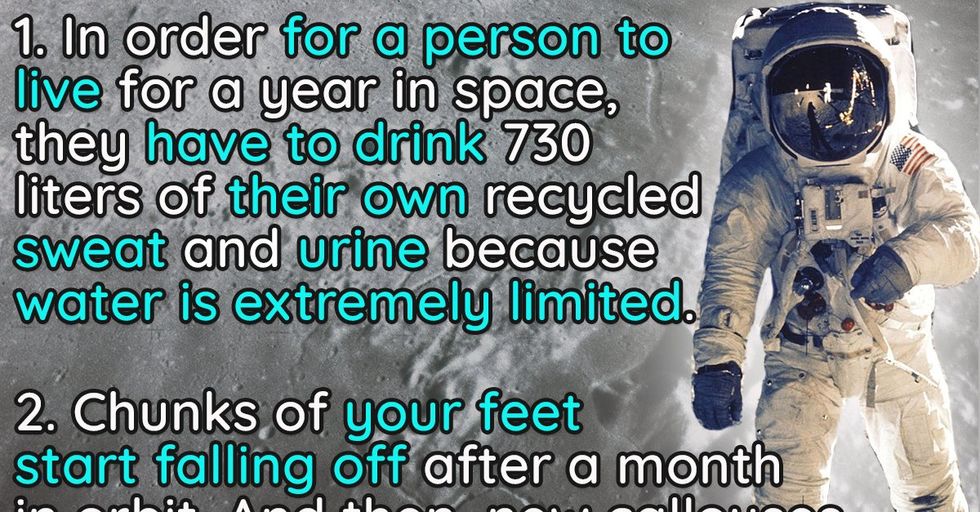 I hate space. Space is scary. You can't breathe in space. Time works differently there. It's vast, much more vast than we even know. It's cold. Full of danger.

Here are 13 nightmarish facts about space that will haunt you every time you look up at the sky. You're welcome.

In order for a person to live for a year in space, they have to drink 730 liters of their own recycled sweat and urine.

This is not a joke. Water is extremely limited in space, so astronauts like Scott Kelly will drink their own sweat and pee to survive up there. Almost makes it not worth it, don't ya think!

Chunks of your feet start falling off after a month in orbit.

I am a fan of foot-peeling adventures. I want to try the Baby Foot Peel thing so badly. But callouses and dead skin just floating off my foot while I'm floating in space? I don't think so.
But it happens. Whole chunks of thick dead heel skin just float off of your body. WHAT. And then, new callouses form on the top of your feet since you use them to grip onto stuff. Yeah. No thanks.

We have no idea what's outside the visible universe, but it's pulling chunks of galaxies away.

Forget chunks of your feet! Chunks of whole galaxies are getting sucked into who knows where. It's called Dark Flow, and it's super terrifying. We don't know what lies beyond what we can see of the universe, so we just assume that the rest of it is filled with the same stuff. But you know what happens when we assume...
In a study a few years ago, scientists found that a group of galaxy clusters were moving at incredible speed toward a small patch of sky. The only explanation is that there's something out there, beyond what we know and can see, that's pulling them away. Cool. Cool cool cool. We're just getting started. More nightmares to come...

The night sky will eventually be completely black.

It probably won't happen for a few billion years, but still. As the Milky Way galaxy (which we live in) merges with others, others will recede from view. According to Scientific American, "The quickening expansion will eventually pull galaxies apart fast than light, causing them to drop out of view."
This would, in effect, erase any signs that the big bang ever existed. According to Scientific American, "To our distant descendants, the universe will look like a small puddle of stars in an endless, changeless void." Nice. I've always wanted to experience an endless, changeless void other than the line at the DMV.

Meteors can strike Earth whenever wherever without warning.

In 2013, 400 people were injured after a meteorite exploded in the mountains over Russia. So anyway, yeah, they can just fall at any moment, rain down on the Earth and case massive destruction, and we might not know until it's too late. Sweet dreams!

A solar superstorm almost changed all of life forever as we know it.

In July of 2012, the Earth narrowly missed a brush with an "extreme solar storm," the most powerful that we've seen in more than 150 years. Two years later, Daniel Baker of the University of Colorado said, "If it had hit, we would still be picking up the pieces."
Solar storms are a threat to all forms of "high-technology." It begins with an explosion, then x-rays and extreme UV radiation would have reached Earth at light speed. It would have caused radio blackouts and GPS navigation errors on a massive scale. Then satellites would have been blasted with energy and gotten damaged. The whole world would have been without power. Luckily, Earth happened to not be in the spot that this superstorm hit in 2012. But it could have been! The next fact might be even scarier, but I included a GIF of a sloth...

The universe could just up and explode in a few billion years.

Who knows if human beings will survive to this point, but the issue is that everything is so tenuous! They're calling this potential explosion the "Big Rip," and while it's just a theory, it's a plausible one. According to The New York Times, "Recent astronomical measurements, scientists say, cannot rule out the possibility that in a few billion years a mysterious force permeating space-time will be strong enough to blow everything apart, shred rocks, animals, molecules, and finally even atoms in a last seemingly mad instant of cosmic self-abnegation." Honestly, at this point, that's what we deserve.

It's true, and as someone who does not take kindly to bad smells, this might be the most horrifying fact of all. But here are some ways the smell of space has been described by people who've been there: "Seared steak." "Hot metal." "Welding fumes."
"Carries a distinct odor of ozone, a faint acrid smell." "Sulfurous." "Just imagine sweaty feet and stale body odor, mix that odor with nail polish remover and gasoline ... then you get close!" Nope!

Galaxies eat each other.

No biggie. But "galactic cannibalism" is totally a thing. A 2003 study discovered that the way large galaxies grow is my "gobbling up" smaller galaxies, according to Universe Today. OK they don't "eat" galaxies, per se, but they do bring them into themselves through "gravitational interactions" and just kind of fuse together until they are one big galaxy.
But that's not terrifying at all! Not, at least, in comparison to our next fact, which has to do with how astronauts sleep in space...

Your arms float in front of you while you sleep in space.

Astronaut Marsha Ivins spoke to Wired and describes exactly what life is like up in space. She described that in order to sleep on the shuttle, "you strap your sleeping bag to the wall or the ceiling or the floor, where you want, and you get in. It's like camping."
"The bag has armholes," she continued, "so you stick your arms through, reaching outside the bag to zip it up. You tighten the Velcro straps around you to make you feel like you're tucked in. Then you strap your head to the pillow — a block of foam — with another Velcro strap, to allow your neck to relax. If you don't tuck your arms into the bag, they drift out in front of you. Sometimes you wake up in the morning to see an arm floating in front of your face and think, 'Whoa! What is that?' until you realize it's yours. If this makes you uncomfortable, float your hand way up in the air. Yeah, me too.

There's a giant black hole shooting through space at 3 million miles per hour.

Black holes are like mythically dangerous. Apparently, this black hole is about 2 billion light-years away...for now. Who knows when it'll reach us?!

There are almost certainly aliens but we haven't been visited yet, at least not in a way that we are capable of perceiving.

Scientists are pretty sure that there are billions upon billions of other Earth-like planets in the universe, and yet we get the feeling that we are very alone — it's called the Fermi Paradox and it's way more complicated than I can understand. But the point is, there are probably other intelligent life-forms, and either they haven't bothered to visit us, don't know that we're here, or have tried, and we as humans are just so limited in our capabilities for perception that we don't even know how to communicate with them. Which brings me to my last fact about space...

Every year, the moon gets four centimeters farther from the Earth.

That may not seem like a big deal, but it could have devastating effects on the future. Eventually, if it gets far enough away, it will slow the Earth’s rotation so a single day will take longer than a month.

If a black hold were to find its way into our solar system, it would throw planets out of orbit and tear the sun to pieces.

No biggie! Black holes are just the worst. They would literally tear our world apart.

While it seems fun to float around, spending long periods of time in zero gravity can have serious effects on your mental and physical health.

Astronauts have exhibited severe muscular atrophy after only six weeks in space, even when they have a rigorous exercise program.

There are rogue planets that roam the universe and crash into things.

They usually have freezing surface temperatures but molten cores, which has led scientists to believe that these rogue planets could have huge oceans that support life. Yes, we’re talking alien sharks roaming free around the galaxy.

The heat of a supernova can reach temperatures of 50 million degrees Celsius.

Venus is the most extreme, dangerous planet in the solar system.

Its surface temperature is 500 degrees Celsius, its atmospheric pressure is 90 times that of Earth, and it’s constantly raining down acid rain. There’s no visiting Venus.

We have only witnessed less than 5% of the material the universe is made of.

It’s just a fact that the sun will continue to get hotter and hotter.

One day, it will get so hot that the Earth’s atmosphere will be burned away, our oceans with boil and evaporate completely. Then, when the Sun’s hydrogen is gone, it will expand into a red giant and consume the entire Earth, destroying it and everything on it. Sweet dreams!

Since space is a vacuum, there’s no sound out there.

You can’t hear anything. If you could just float in space, you would go crazy from the lack of sound.

That's a bad percentage! Good news is that space travel is much safer than it used to be.

A person in space and a person on Earth experience time differently, but neither of them perceives the difference.

Even if an astronaut has been in space for many years, when she returns home, she will have only aged a fraction of the amount she would have if she were on Earth. I KNOW. Insane.

If you were to step out in space with no suit, all of the water in your body would boil, evaporate, and expand until your body popped like a balloon.

You will explode. Awesome.

Scientists believe that the universe will end one day, but there are two theories as to how it might happen.

The first is the big crunch: the gravitational forces in the universe will reach a limit and cause the universe to stop expanding and instead fold back in on itself, converging into one super tiny point before disappearing forever. The other theory is the big rip: The universe will expand to the point where gravity means nothing anymore and the whole cosmos will rip apart, even the individual particles in atoms will float away from each other.

Space is littered with human and animal corpses. Probably.

In the early days of space travel, there were some failed missions that resulted in the deaths of animals and humans. Not every one of these spacecrafts have recovered, which means they’re still floating through space. You do the math.

There’s such a thing as vampire stars.

They suck the life out of others to go on burning for longer. Cool cool cool.

WE DON'T EVEN KNOW WHAT WE DON'T KNOW ABOUT SPACE.

Guys, space is larger and crazier than we can perceive or imagine. We may never grasp the vastness of it. And that's why I think we should just give up. It's dangerous. If aliens want to talk to us someday, cool. If not, cool. I don't want to live in space. I don't even want to visit it. Let's fix the Earth first.