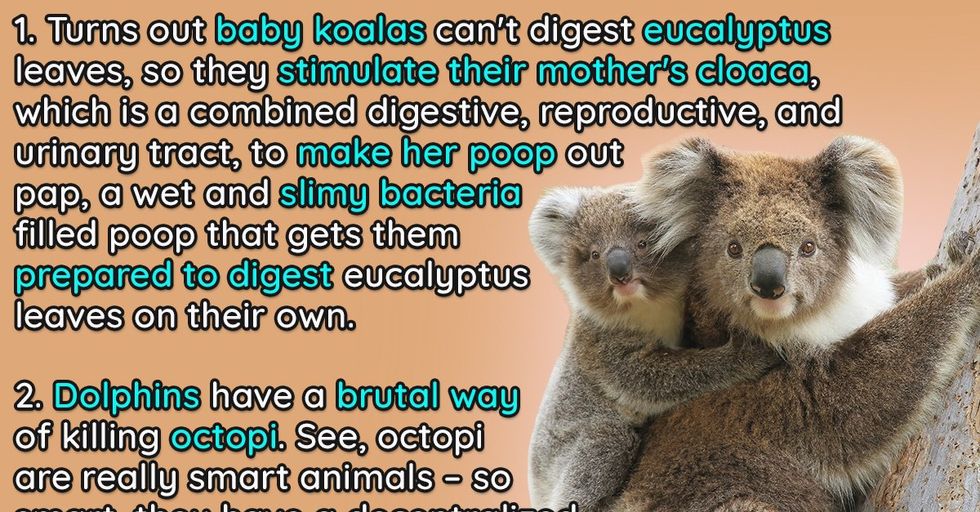 Everyone loves cute animals. Whenever we see one, something clenches deep inside ours heart and we just want to love and squeeze and hold them forever. But behind every cute face lies the capacity for utter and complete monstrosity, savagery beyond imagination, and just plain grossness.

Here are a few horrifying facts about some animals you may have wanted to squishy face in the past. Some of these are utterly disgusting. You've been warned.

We all love baby koalas. They're fuzzy, heartwarming little bears that we just want to cuddle and love forever. But did you know they eat poop?
Turns out baby koalas can't digest eucalyptus leaves, so they stimulate their mother's cloaca, which is a combined digestive, reproductive, and urinary tract, to make her poop out pap, a wet and slimy bacteria-filled poop that gets them prepared to digest eucalyptus leaves on their own.
"The leaves are really hard to digest, they're tough and fibrous," Caroline Monro, Wild Life's main koala keeper explained. "So once the joey feeds on pap it allows them to get that gut bacteria into their stomach, so they can then digest these eucalyptus leaves."

See that fuzzy bear clinging to a tree? Don't pick it up because it might have an STI. In fact, in some parts of Australia, up to 90 percent of the bears are infected. Australian wildlife officials are doing everything they can to combat the illness, but it's an uphill battle.
The disease can cause conjunctivitis, urinary tract infections, and infertility. Don't be worried about catching it though – koala to human transmission is super rare, although One Direction did have a scare once. Don't worry, Harry Styles definitely didn't catch it.

Male bottlenose dolphins are known to form gangs that abduct females of their kind, who they then proceed to violently rape for weeks and weeks. When the poor female tries to leave, they slap and abuse her. Oh, and if there are no females around, they'll rape a male instead.
Even worse, male dolphins will kill their mate's babies to ensure she doesn't lose interest in mating. They've also been known to kill baby porpoises as practice.

Which is exactly what it sounds like. Male dolphins stick their penises into the blowholes of other dolphins and they stimulate themselves. Nature is fascinating.

Dolphins have a brutal way of killing octopi.

See, octopi are really smart animals – so smart, they have a decentralized nervous system, which means some of their neurons are in their tentacles. Because of this, the tentacles will keep moving even after other parts of the creature is dead, trying to escape.
To prevent choking to death from wriggling tentacles, dolphins rip apart octopi, slam them repeatedly into the water, and generally bludgeon the living daylights out of them before they eat them. Fascinating.

Don't be fooled by all those pretty pictures of otters holding hands so they don't drift apart, these animals are extremely brutal. Sea otters are known to rape baby seals to death, and then, to sometimes guard the corpse for weeks while they continue doing so.
Seals aren't the only animals otters are sexually aggressive to, there was that one otter in British Columbia that raped and murdered a dog, because anything American otters do, Canadian otters will one-up it.
Other animals aren't the only ones that suffer from the sexual aggression of male otters. About 10 percent of female otter deaths are because of copulation, and when there's a scarcity of females... well, then they start chasing other animals, so keep Fido locked up if there's otters nearby.

Otters need to consume about 25 percent of their body weight for food per day – a daunting proposition. So, some male otters have come up with a solution. When they're short on food, they'll begin trying to drown babies until the mother surfaces, and they can take the food she's been harvesting. Lovely creatures, otters.

Male penguins rape other males, babies, and even the ground. Yeah, the ground.

You know how penguins look like cute little gentlemen in suits? Well, that's a whole load of baloney. Turns out penguins are really rapey. They'll rape other males, injured females, babies that fell from their nests, corpses, the ground... Yes, they'll actually stimulate themselves with the ground until they reach – ahem – completion.

Male chimps kill and dismember babies so they can mate.

Yes, you read that right. Say a chimp wants to get it on, but the mother is busy being – well – a mother. They'll steal the baby, gruesomely dismember it and eat it before her eyes so that she's forced into mating again.

Don't worry, females do it too.

Female chimps are also known to kill other chimp's babies. In fact, renowned primatologist Jane Goodall once discovered a serial killing mother and daughter duo called Passion and Pom who had killed at least three chimp babies at Gombe Park in Tanzania.

Chimps are brutal killers in general.

They not only kill their own kind in violent wars and often gruesomely depose their own troop leaders, they've been known to go for humans too. In the 1990's there was a chimp named Saddam (after the brutal Iraqi leader) who was known to kill human children in Uganda.
He was finally stopped in 1999, when he was killed by local hunters after murdering an 18-month-old girl. Lovely animals, chimps.