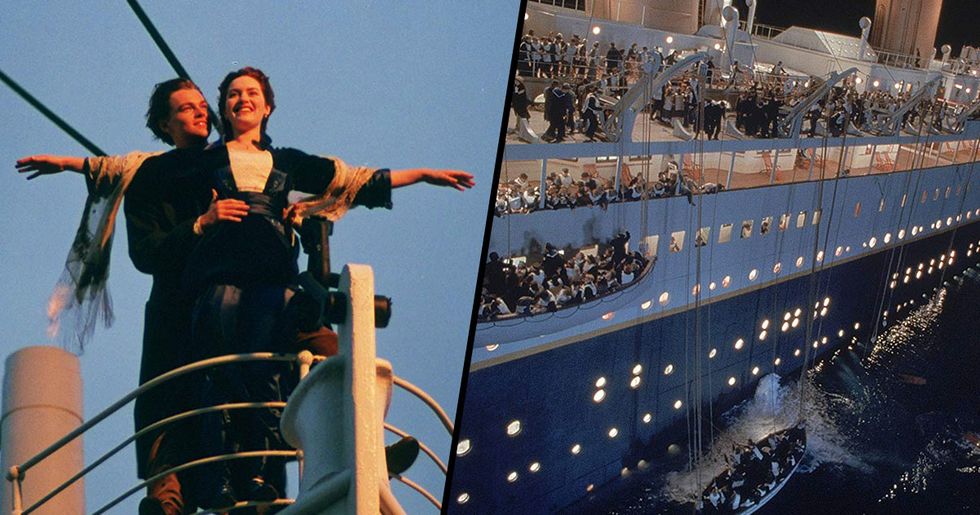 1997's Titanic was a record-breaker when it was released - and it continues to delight audiences to this day. The big-budget retelling of the 1912 tragedy took viewers by storm - not least because of the iconic performances by Kate and Leo. It's truly the movie that keeps on giving.

You'd think that after twenty-two years, we'd have run out of things to say about it, but such a big production always means plenty of on-set secrets. And we're confident that even the biggest Titanic fan won't have heard of all of these facts about the movie.

Debuting in 1997, Titanic is still one of the biggest movies of all time.

It won a whopping eleven Academy Awards (including the coveted Best Picture) and is still way up there in terms of the highest-grossing movies ever.

Part of the film's success is down to its stars.

Kate Winslet and Leonardo DiCaprio were perfectly cast as young lovers, Rose DeWitt Bukater and Jack Dawson, who came from different worlds but were perfect together.

The movie had incredible special effects.

Especially when you consider the fact that the movie came out in 1997; the way that the filmmakers brought the sinking of the Titanic to life was truly spectacular.

It also gave many of us our first introduction to tragedy.

No matter what the filmmakers say, there are still those on the internet who insist that Jack could have fit on that door (more on that later).

The first fact centers around a pretty unlikely participant.

Neil DeGrasse Tyson. In the original cut of the movie, Kate Winslet lies back on her floating door and gazes at the stars - which are Tyson's specialist subject, after all.

But Tyson noticed something problematic.

The stars that she sees would not be visible based on where the Titanic sank. Tyson wrote to Cameron to let him know - and it bothered him so much that he actually changed the sky in the 2012 3D release.

How about that elderly couple?

In the movie, one truly heartbreaking scene shows two older passengers settling down into bed, resigned to their fate as their room fills up with water.

But what you may not know...

These two characters were actually based on real people. Isidor Straus (plus wife Ida) co-owned famous department store, Macy's. The pair both really died on the RMS Titanic, too.

Many remember the famous sketch from the movie.

In fact, it was the whole reason that Rose ended up getting involved with the search for the necklace, revealing her incredible story.

In the movie, the sketch-artist was (of course), Leo.

But in real life? It was actually drawn by director, James Cameron. It's now one of the most coveted props in film history, with a value of $16,000 when it was last sold.

Many fans are startled by the attention to detail on the ship itself.

And it was recently revealed that there was a very good reason for this. James Cameron was so particular about capturing the right feel that he actually descended to the wreckage multiple times.

In fact, Cameron ended up spending a lot of time on the ship.

And we mean a lot. It was actually revealed that Cameron spent more time on the wreckage than any passenger did on the actual ship.

We all know that Titanic was a pricey movie to make.

But have you ever considered exactly how much the movie cost? Because one fan did the math.

The final cut stands at just over three hours - 195 minutes, to be exact. That works out at over a million dollars per minute of screen time. Wowza.

One reason for the high expense?

The incredible level of attention to detail. Researchers from the White Star Company were on hand to offer particular insight into the interior design of the famous ship.

This means that the movie is super authentic.

Right down to details such as the wallpaper, chandeliers, and even smaller ornaments used as props, everything is historically accurate.

Cameron was truly dedicated, ensuring that the actors were served real Beluga caviar during the dining-room scenes. This caviar costs between a whopping $3,200 to $4,500 per pound. Now we're starting to understand that crazy budget.

Many of the actors were pleased with the decision.

Jonathan Hyde, who played J Bruce Ismay, the managing director of the ship, claimed that he tasted the caviar and "made an acting decision on the spot that Ismay was a big eater."

Leonardo DiCaprio was known for being the heartthrob of the movie.

But, according to one of his body doubles on the set, he categorically did not covet the attention.

In fact, DiCaprio preferred the company of a certain scaley pal.

He would apparently bring his pet lizard (ingeniously named Blizzard) to set most days, and spent hours playing with the creature.

Oh, and speaking of DiCaprio...

The happy-go-lucky, rough-around-the-edges personality of Jack Dawson sparked the romantic awakening of many girls (and boys) around the world.

But there was a surprising amount of DiCaprio in the role.

The iconic "king of the world" line that Jack shrieks upon boarding the boat? It was actually straight off the top of DiCaprio's head!

With a budget as big as the Titanic's, you'd expect the catering to be pretty incredible.

But on one of the final days of shooting, crew members took things to the next level. On set in Nova-Scotia, the cast and crew were served clam chowder - with an extra special ingredient.

Although it wasn't something that many actually wanted.

According to Vice, a batch of the soup was reportedly spiked with hallucinogenic drug, PCP. After ingesting the narcotic, around eighty people fell ill and reported hallucinations.

Cameron's attention to detail wasn't just focused around the set.

He was also a stickler when it came to the characters in the movie - even the ones that you never heard of or even noticed.

He reportedly had a collection of 150 "core extras."

These extras all had names and backstories and were there for the majority of filming. These actors were even trained in 1912 mannerisms and customs for maximum authenticity.

Many of us fell in love with Jack Dawson.

And, in the movie, he exists only as a memory in the elderly Rose's mind. But what if we told you that there was a little more substance behind the stud?

Jack Dawson was reportedly based on one very real figure.

Jack London was an American novelist, known for his works, The Call of the Wild, and White Fang. He also had a similarly varied life to Dawson, taking part in the Klondike Gold Rush.

Let's finish on a controversial one.

At the end of the movie, Jack freezes to death in the water, while Rose saves herself by floating on a door. For years, many have claimed that there was room for Jack to survive, too.

Mythbusters actually claimed that Jack could have fit on the door without causing Rose to fall in. Case closed, right? Well, actually, people have speculated that the "door" was actually a large piece of heavy wood from the Titanic's interior, which actually couldn't have withstood the weight of two people. We guess we'll never know! Hungry for more bizarre movie facts? We've got some of the creepiest horror movie trivia below!