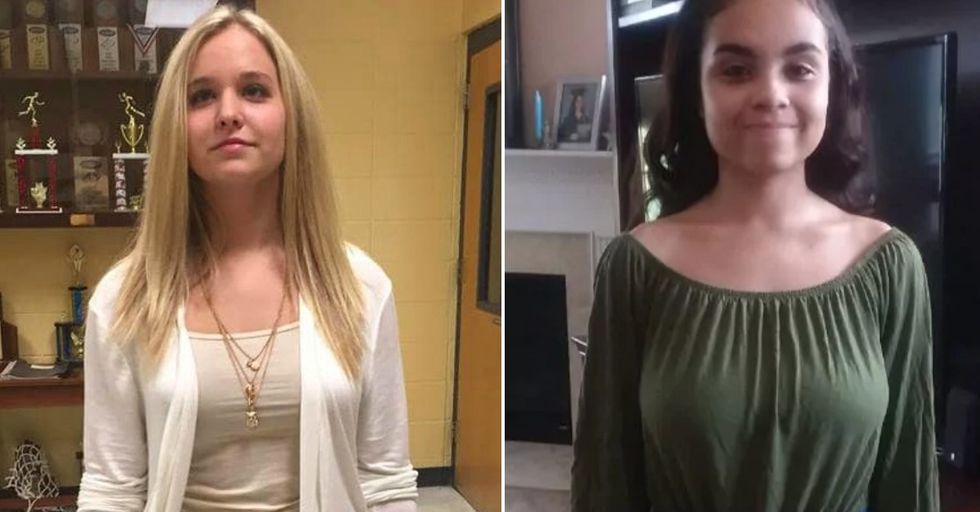 It seems like every week there is another instance of a student being punished for violating the school dress code, and more often than not, the student is female. While it's important to follow the rules, sometimes those lines get blurred when the outfit in question looks, well, completely normal and not like they're going out for a night on the town with their fishnets and halter tops.

What's even more infuriating is that the reason is often that they're "distracting" to the male students, which is a whole different issue to tackle.

But take a look at these outfits and let us know — does the punishment fit the crime?

This student has a 4.4 GPA and stood up against what she felt was an unfair punishment — suspension and being barred from walking in graduation — because of this shirt.

According to Yahoo, between twenty-five and sixty girls who dared to wear a dress on a day when the temperature hit the 90s were pulled out of class in California.

Cameron Boland had just won the title of "Historian of the National Honor Society" by giving a speech at another school before it was quickly stripped away from her because she was wearing a dress with spaghetti straps. “I was aware of the dress code at Ida Baker, but not going there, I didn’t think it applied to me, I am not one of their students. Also, being an extracurricular activity an event, I didn’t feel a need to comply with the dress code," said Boland.

This is literally one of the most unoffensive outfits in the world, but yet because her collarbone was exposed, she was pulled out of class and told to put on a scarf.

These jeans and tank.

Laura Anderson was actually sent home from a school in Canada to change because what she was wearing — ripped jeans and a tank — broke the rules.

This Utah student had to wear her winter coat during her school dance because the straps on her dress were not thick enough. I'm not kidding. She had to go to the car, get her coat, and cover up her shoulders during the dance.

Carey Burgess was sporting a skirt that was just a little too short and called out in front of her peers for it — by a teacher. You have to read the whole post, but here's the highlights: "You saved me, Beaufort High. As Student Body President, junior marshal, and a recipient of the Palmetto Fellows, I was heading down the path of hard drugs (good thing you're testing next year!), strip clubs, and sugar daddies."

The shirt of shame.

This is ridiculous, but apparently if you wear a dress that's four inches above the knee at this Florida high school, you'll be sentenced to wear this humiliating "DRESS CODE VIOLATION" shirt and matching red track pants.

Sophia Abuabara, a student at Tom C. Clark High School in San Antonio, Texas, who was ordered to change after her principal deemed her long-sleeved dress "too short" for school, even though she's tall and has a hard time finding clothes.

Her mom went OFF and launched a huge debate.

Cute, right? Not so much, as it got her suspended thirty minutes before the end of the school year because her dress was "too short".

Veronica Ferry has actually worn this dress to church...

...but that wasn't good enough for her high school. She was still told to call her mom and change into a different outfit. She just went home instead because she was too upset. "I just felt like the teachers were disappointed and that I didn't have any self respect," said Veronica, "and they just talked to me in a mean and degrading way. They just made me feel really bad."

Students at a Texas high school thought wearing T-shirts for their friend who died in a car accident was a nice tribute, but it actually violated dress code and students ended up going home because of it.

These were, which were apparently inappropriate because they stopped short of the girl’s fingertips.

In this case, Mama Bear was NOT having it and wrote a letter to the principal that quickly went viral. So what do you think?