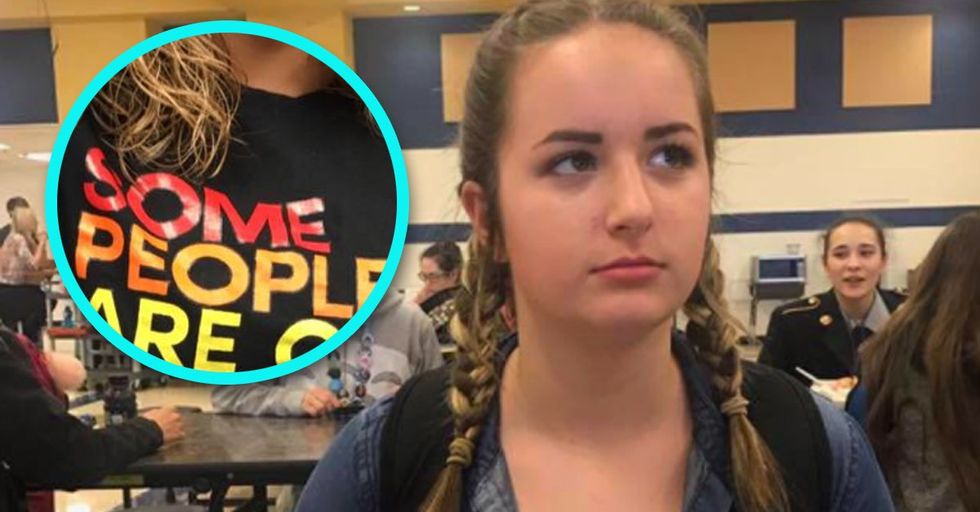 Another day, another kid punished for a messed up dress code violation. It seems like there's literally no end to school administrators completely missing the point and punishing students — most of them female — for wearing clothing that is perfectly appropriate and inoffensive. Yeah, it's totally sexist and problematic, but it keeps happening anyway. It's a real problem.

Today's story about a completely inoffensive outfit being deemed unacceptable from school comes to us from Copperas Cove, Texas.

Ali Chaney was a 13-year-old student at a junior high in Copperas Cove, Texas.

Like many 13-year-old girls, she spent some of her free time earning extra cash by babysitting. She decided to spend her babysitting money on a new T-shirt.
Ali arrived at school on a Monday morning wearing her new shirt. Nothing too out of the ordinary to this story, right? This is all just normal, everyday teenager stuff.
Once she got to school, Ali headed for the cafeteria, where she typically hung out with her friends before her first class. Some of her fellow classmates noticed her new shirt and complimented her on it. Again, nothing disruptive or out of the ordinary was going on.

The bell rang and Ali headed to science class. But just a few minutes into the lesson, she was called to the administrative office.

The school's principal, along with two vice principals, told Ali that she needed to change her shirt immediately because it was "distracting."
Now, go ahead and imagine what you think a "distracting" shirt might look like. Maybe it was too low-cut? Maybe it bared her midriff. Maybe it was completely see-through? Nope! It was none of those things. Here's the shirt Ali got sent home for:

It's a black T-shirt with rainbow text reading, "Some people are gay. Get over it."

Obviously, this was an absolutely ridiculous call.

After all, some people are gay. That's just a fact. Would the school administrators have thrown such a fit about another shirt stating a simple fact? Something tells me that probably wouldn't be the case. Ali's mother, Cassie Watson, says her daughter called her and was hysterical on the phone. Watson rushed to Ali's school with a shirt from her office.

Watson then shared a Facebook post about the incident, where Ali received overwhelming support for her awesome shirt.

"I know that there are multiple gay kids that go to school with Ali," Watson said. "I didn't think they'd take a message on a shirt that strong against Ali when they have so many kids who are LGBT already." It is absolutely bananas that the school would take issue with a shirt that promotes a message meant to make places like school safer for people who are typically marginalized. The fact that the school reacted so strongly to such an innocuous piece of clothing sends a crystal clear message to students in the LGBTQ community: You are not welcome here.

The school later claimed that Ali's shirt had bothered other students.

Which, first of all, seems unlikely given the fact that multiple students had complimented the shirt before Ali was called to the office. Secondly, if a shirt urging people to accept that some people are gay bothers you, there's only one response needed:
Seriously. Get over it. As for Ali, I say way to go! I think you're totally rocking the shirt.