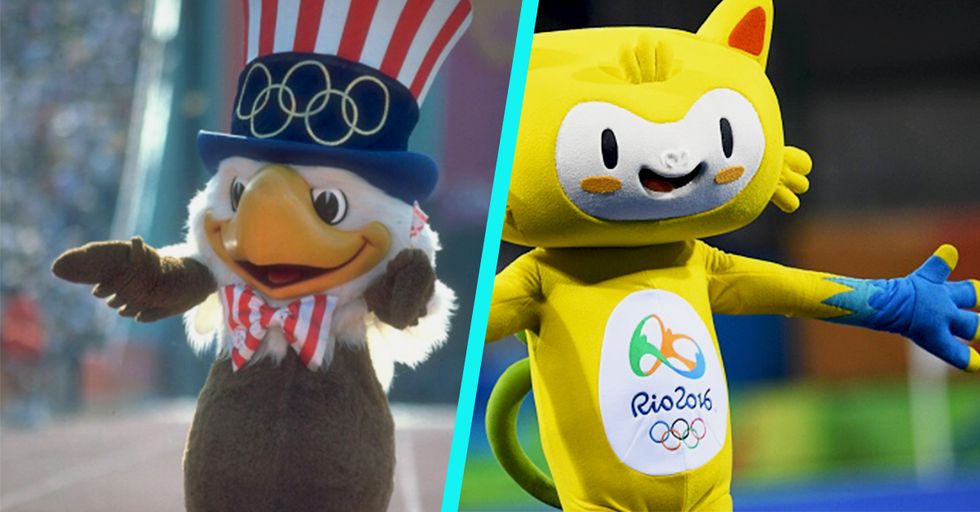 A lot of people don't know this, but there are actually mascots at the Olympics. The first mascot appeared on the scene at the 1968 Winter Olympics in Grenoble, and ever since, fictional characters have been designed for each Olympic games.

They're meant to represent the cultural heritage of the country that's hosting the games.

Here's another thing you might not know: Most of the Olympic mascots are actually pretty terrifying. I've collected some of them here and ranked them from least to most creepy. See if you can make it all the way to the end.

OK, this one is obviously adorable. I've included Waldi here as a baseline against which to compare every other mascot. Waldi was designed the second-ever Olympic mascot. Things went downhill from there.

Again, pretty adorable. Who doesn't love a teddy bear?
But there's something nefarious going on around the eyes, right? That bear might give you a hug, or it might snap and break your arms. It could really go either way.

It's a beaver! This one isn't terrifying, but I'm deducting points for its lack of eyeballs.
Also, the rainbow stripe is nice, but the entire design is just so...simple, you know? Why go for simplicity when you could literally terrify everyone that looks at the mascot? That seems to be what these other mascot designers had in mind...

Why are his wings so tiny? Why is his hat so big?
Also, Sam? Really? A bald eagle in an American flag hat named Sam? Points deducted for lack of creativity.

All right, now we're getting somewhere! Again with the dead eyes!
Hidy and Howdy are polar bears who are (inexplicably) dressed in cowboy outfits. Are their hats made out of their fellow polar bears? Maybe!

I get the appeal of cartoony animals. After all, these characters are meant to appeal to kids, right? But do they have to this terrifying? All three of these creatures look like they could crush all of your bones and not even bat an eye. These first five mascots are all animals that exist in real life (with some extreme liberties taken, of course). But this marks the end of real-life creatures. From here on out, the Olympic mascots take a much more abstract (and MUCH more horrifying) turn...

I know what you're thinking. Vinicius isn't creepy; he's just a happy, yellow...wait...what is he supposed to be? EXACTLY.
According to Vinicius' Wikipedia listing, he is "an animal representing all Brazilian mammals." That's not how it works, Brazil! You need to choose a mammal. Also, does that include humans?!

Anthropomorphized snowmen are nothing new, but they usually do not have arms or legs. Or a red hat. Or antennae???

Aaaaaaand we have taken a nosedive into the uncanny valley. Their description just says they are "brother and sister." Apparently, they were meant to resemble some ancient Greek dolls.
I think Greece might have forgotten that they have an entire Olympic legacy to uphold, 'cause they kinda phoned it in on Athena and Phevos, here. What could be creepier than these clompy-lookin' weirdos? I'm glad you asked...

Magique is, according to Wikipedia, "a little imp in the shape of a star and a cube." A star and a cube! One three-dimensional figure simply wasn't enough for ol' Magique. I'm gonna try my hand at designing an Olympic mascot (the one for the 2020 games hasn't been announced yet). It's a sphere, but also banana-shaped, and it has 12 arms, 26 ears, and wears a tin foil dress. Oh, and it can kill you with a single look. Am I hired?

Oh, look! It's a snowball and an ice cube with legs and arms! The better to kill you with!

Whaaaaaaat is going on here? Izzy was the first computer-generated mascot and, in my opinion, the first official proof that maybe we should never have invented computers. Her eyebrows are lightning bolts. She has legs and arms...but is also just a giant mouth and eyeballs? There's too much to unpack here, and honestly, I'm too traumatized to even attempt it. Let's move on, shall we?

Wenlock and Mandeville are described as "drops of steel with cameras for eyes." Which is weird because I have had that literal nightmare several times. Their giant camera eyes are actually kind of perfect considering the fact that London is one of the most surveilled cities on Earth. And finally, the No. 1 most creepy, horrifying Olympic mascot of all time!

Careful readers will remember that 1968 marked the very first time a mascot appeared at the Olympics. This is what they started with. A skier with a face that looks to have been peeled off. Somehow, people saw Schuss and thought, "Yes. Good. We need more Olympic mascots. We must haunt the children 'round the globe." Maybe it's time we stop with the mascots and just give the kids candy.