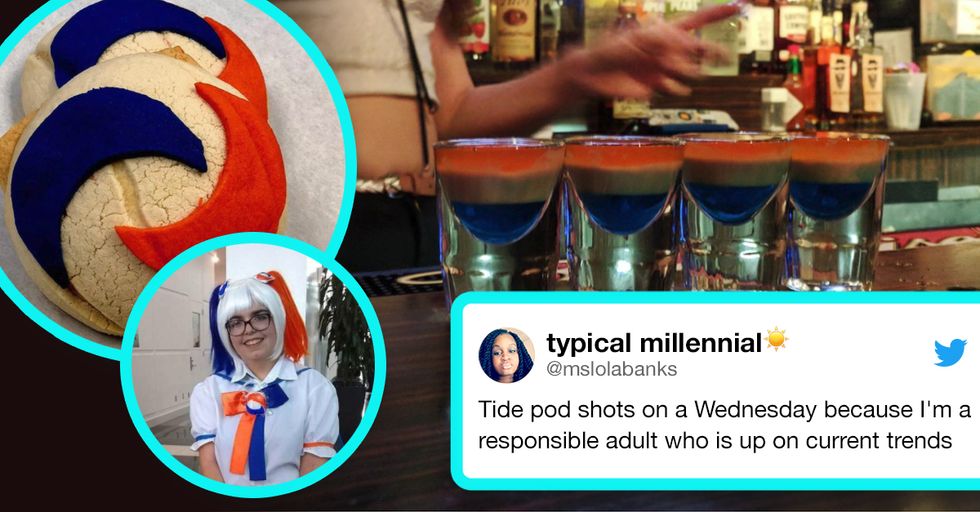 14 People Who Refuse to Let the Tide Pod Meme Die

Look, every generation of teenagers has fallen for dumb trends. In the '80s, it was hairspray and acid-washed jeans. In the '90s, it was Beanie Babies and scrunchies. In the '00s it was those animal-shaped rubber band bracelets.

And now? It's Tide Pods.

For reasons that no one is quite able to explain, Tide Pods are having a moment.

Yes, I'm talking about the laundry detergent in the convenient dissolvable pillows. Most of us see them and think, "Oh good! Soap!" but the youths are talking about how they look delicious. If you don't understand it, you're not alone and there's nothing to worry about. It is un-understandable. It's just a dumb meme that's taking over the Internet, basically.

The best way to end a meme is to drive it into the ground by taking it way too seriously. So, in an effort to bring an end to Tide Pods, I present the following Tide Pod donuts:

And it's not the only one.

What's that? You want another donut? Here you go:

At least this one is square like an actual Tide Pod. I can appreciate the effort that went into this one a bit more.

It's a shot of alcohol meant to resemble a Tide Pod.

I find this one particularly puzzling because if you are old enough to drink alcohol, you should not have fallen prey to the Tide Pods meme, right? But here we are.

How about some Pan Dulces?

Or should I saw POD Dulces? No, I shouldn't.

This restaurant made calzones that (kind of) look like Tide Pods:

They call them PIEd Pods. Now, I can appreciate a good pun (remember when I made that hilarious "pod dulces" joke?), but I draw the line at a pun that requires you to dye cheese blue.

See this, teens? A company with a CEO and a website and paid employees is cashing in on your dank meme. Guess it's officially time to retire it, right?

These actually look tasty enough that I was ready to give up my war on the Tide Pod meme. But then I found an entirely new category of Tide Pod memes...

Once something has been immortalized in slime form, there's no further plane to which it can ascend. Slime is it. Further proof that Tide Pods can go back to just being convenient ways to do our laundry.

These fishing lures probably weren't designed with Tide Pods in mind, but I can't see anything else.

It's not enough to trick people into eating Tide Pods, apparently. Now, they're coming for our fish, too.

This person likes Tide Pods so much that they painted them on their fingernails.

I like Tide Pods so much that I keep them in my hall closet and use two of them for each load of laundry that I do. We have different interests, this person and I.

This is it. We've strayed too far from the light. Let's put an end to this. Please.