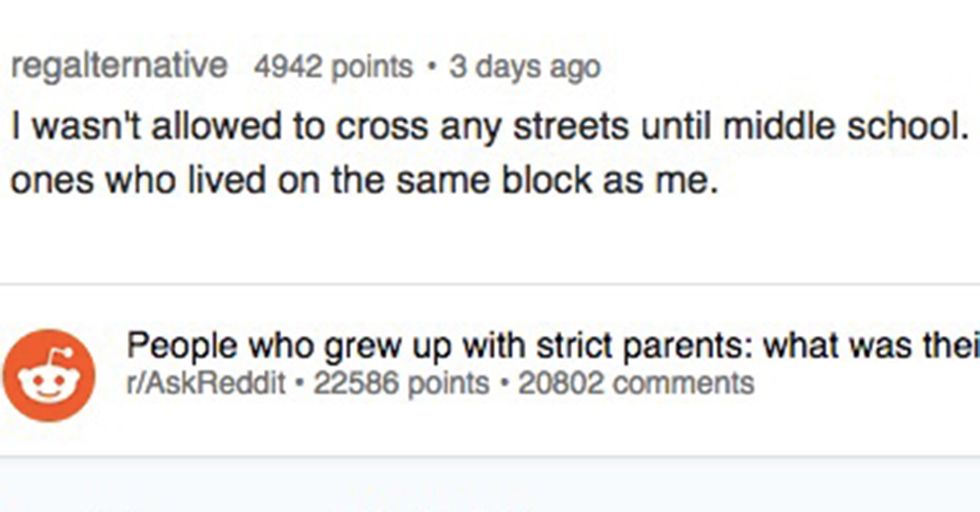 14 Stories About the Strictest (Real) Parents That Ever Lived

Growing up, kids need rules. No one will argue with that. But what those rules should cover is a pretty subjective call.

Parents lie all over the spectrum from "insanely chill" to "insanely strict." There's no one answer for the question of "How do I raise a kid?" but you'll be happy that you didn't have the uber-strict parents that were described in a Reddit thread sure to make you count your blessings.

Well, that's bound to keep you around the house. Or at least on your block.

Did you wave to kids riding their bikes like some sort of shipwrecked castaway?

Sounds like she values her shampoo a little too much. Loosen up a bit. And let her use conditioner!

Dad got a little dramatic here.

Ironically, this is what the entire rock n' roll lifestyle is based on. Dad just played himself.

A week for a MINUTE?

Yikes. That's the entirety of your summer for being ten minutes late. That's not a deterrent; That's just cruel.

This is the kind of thing that children take with them as they mature.

Grounded for a week and forced to come home for two t-shirts on a chair. Lighten up, Mom! Don't you want your kids to like you later on?

You have your own weird values? Fine. You don't believe in ordinary functions of the human body? DON'T BE A PARENT. OR A HUSBAND.

Don't treat food as a privilege for your kids. Yikes!

Making your kids ask for supper sounds like something that happens in Oliver Twist. Let your kids eat when they're hungry. You're trying to make them functioning adults, after all!

This is all harsh, but I hope the mom felt at least a little stupid when the prosthetic leg kid came over!

"Organize your closet by color, children." WHY?

Can we do a Kickstarter to rescue this kid from an oppressive home?

This seems borderline criminal. That dad has issues.

Forbidden from talking to 50% of the population.

And that sister is a damn snitch. She'll get hers one day.

Is this the weirdest strict rule ever?

"No volunteering or helping the elderly." Oh...kay?

This sounds like something out of a movie. And shouldn't go on.

Disturbing and terrible. "Strict" doesn't do this sickness justice.

Even as a girl, I would think that the sexist chore assignments would be better than that bedtime.

But they're both great ways to distort a kid's sense of family or childhood.

Let's get back to a (kinda) funny one.

These parents no doubt have their issues, but if they think Pokémon teaches evolution, they should see what the rest of the world has to say!