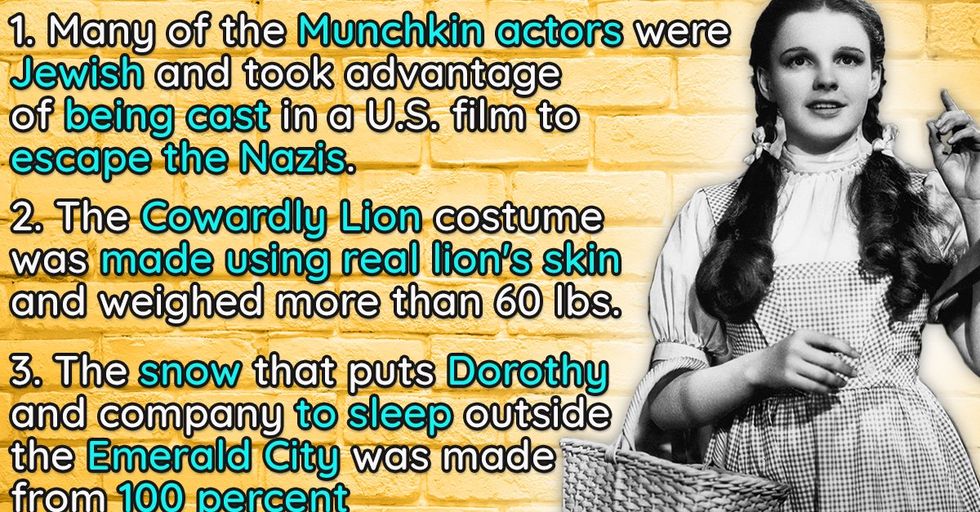 "Somewhere over the rainbow..."

The Wizard of Oz is a classic film that has captured the hearts and imaginations of children of all ages, all over the world. You're undoubtedly familiar with it, but how much do you really know?

We're offering a peek behind the curtain to share some behind-the-scenes facts about one of the world's favorite films. (Pay no attention to the man back there!)

1. That's a Horse of a Different Color!

In order to create the "horse of a different color" effect, they used JELL-O to dye the horses' coats (four different horses were used). They had to rush to get the shots because the horses kept trying to lick the JELL-O off.

2. If I Were King of the Forrrreeeeeeessssttttt!

The Cowardly Lion costume was made using real lion's skin and weighed more than 60 pounds. Bert Lahr (who played the Lion) often got so hot while wearing the costume that it'd be completely soaked by the end of a day of shooting.
There were two people on the production whose only job was to spend the night drying out the costume so Lehr could wear it the next day. Crew members said that the costume always reeked. (No surprise there.)

The wardrobe department decided they wanted a coat that looked used for Frank Morgan to wear for his role as Professor Marvel (he also played the Wizard). They got one from a second-hand store.
One day on set, Morgan turned one of the coat's pockets out and found a label indicating that the coat had been made for L. Frank Baum — the original author of the Wizard of Oz books. Baum's widow and the tailor both confirmed that the jacket had indeed belonged to the author.

All of the munchkins in the film were portrayed by a group of people who at the time were known as The Singer Midgets. They were managed by a man named Leo Singer.
Many of the Munchkin actors were Jewish and took advantage of being cast in a U.S. film to escape the Nazis. Most of them couldn't speak English or sing, so professional singers dubbed over their voices.

5. I Can't Believe You're Not Toto Anymore

Toto was actually played by a female dog named Terry. However, at one point during production, one of the witch's guards accidentally stepped on Terry, injuring her. Judy Garland grew very close to Terry during filming and wanted to adopt her after the film wrapped. However, Terry's owner refused to give her up.

The character of Dorothy was named after L. Frank Baum's niece, Dorothy Louise Gage, who died when she was only 5 months old (Baum changed her last name to Gale in the books).
Today, there's a special stone marking Dorothy Gage's grave. The children's section of the cemetery where she's buried was renamed the Dorothy L. Gage Memorial Garden in hopes that bereaved parents would find comfort in the thought that their deceased children were with Dorothy in Oz.

The snow that puts Dorothy and her friends to sleep outside the Emerald City was actually made from 100 percent industrial-grade asbestos. The filmmakers decided to use asbestos even though the health hazards of the mineral had been well-known for several years.

Dorothy's iconic ruby slippers are now on display at the Smithsonian Institution. They're visited so often that the museum has to replace the carpet in front of the display case multiple times a year.

The tornado that appeared in the film was actually a 35-foot-long muslin stocking. It was spun around a miniature set to make it look like an actual tornado.

11. That Would Have Changed Everything

"Somewhere Over the Rainbow" — the film's most iconic song — almost didn't make it into the final cut of the film at all. The studio felt that it made the Kansas sequence too long and was too abstract for children to understand. Ultimately, though, the song was left in for millions of people to enjoy for years.

The Scarecrow face makeup worn by Ray Bolger consisted of a rubber prosthetic with a woven pattern made to look like burlap cloth. After filming wrapped, Bolger had lines on his face left from the prosthetic. They took more than a year to finally disappear from his face.

13. I Can See the Resemblance

Judy Garland's portrayal of Dorothy was the main inspiration for the character of Mary Ann on Gilligan's Island. You can sort of tell, right?

35 years after the film's release, Margaret Hamilton (who played the Wicked Witch of the West) appeared on an episode of Mr. Rogers' Neighborhood. She put on the witch costume and explained to the camera that witches were only make-believe and that children shouldn't be afraid of them.

15. Somewhere Over the Rainbow