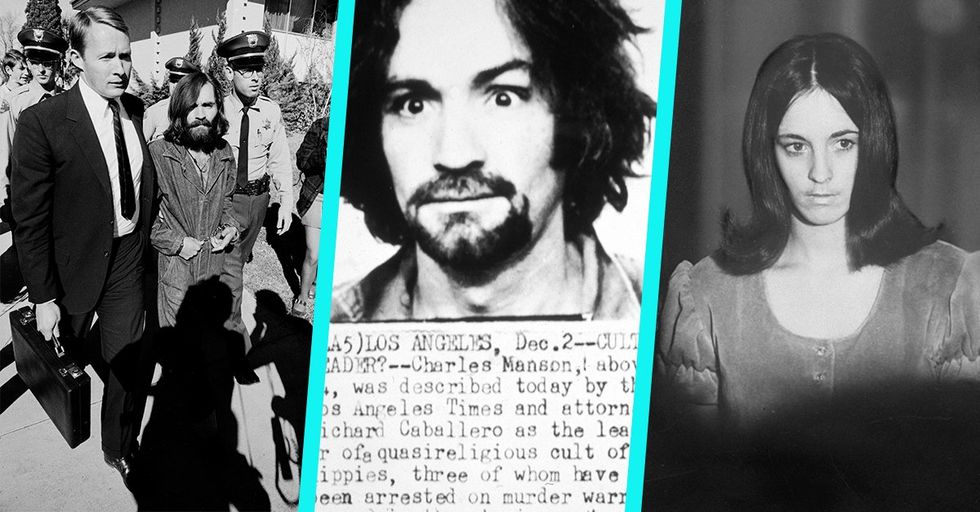 We all know that Charles Manson and the Manson Family were among the most violent and depraved killers of our time. Yet, when one takes a closer look at the infamous cult and their crimes, a series of truly bizarre details are revealed.

These 15 bone-chilling facts about Charles Manson and his Family remind us why the case will forever be considered one of the most haunting and disturbing cases in modern American history.

1) Charles Manson's mother sold him for a pitcher of beer.

If you're unsure as to which side of the great "nature versus nurture" debate you subscribe to, Charles Manson's childhood is proof that "nurturing" plays a significant role in the development a of serial killer. Whether or not Manson was born to kill, the fact that his mother was a criminal who spent time in prison had to play a role in Manson's deranged pathology.
According to CNN, Manson's mother once sold him to a woman who wanted a child for... wait for it... a pitcher of beer. Yup, Miss Manson pretty much takes the cake for worst mom ever. Manson's uncle had to search for the woman who "bought" the boy and eventually retrieved him and returned him to his mother. Perhaps, young Charles would have been better off had his Uncle let the deal stand. Perhaps, society would have as well. Yet, alas, we will never know.

2) Prior to creating his Family and orchestrating multiple murder sprees, Manson had asked to remain in prison.

After spending his entire adolescence in and out of prisons, Charles Manson knew that he was not capable of being a productive member of society. Upon his release from prison as a young man, Manson warned prison guards, telling them, "Oh, no, I can't go outside there." Manson later explained, "I knew that I couldn't adjust to that world, not after all my life had been spent locked up and where my mind was free."

3) Manson used techniques that he learned while studying Scientology and a popular self-help book in prison to brainwash his future followers.

While in prison, Manson was enlisted in the Church of Scientology and "audited" for over 150 hours by his cell-mate, Layeyette Raimer, who was a high ranking member of the Church. However, Radar Online reports that eventually, Manson grew weary of the intense training sessions and began to throw fits until guards moved his cellmate elsewhere. Ultimately, Scientology was "too crazy" even for Manson. Yet, once out of prison, he did utilize techniques that he learned while studying Scientology to manipulate and brainwash his followers.

He also utilized techniques from the popular bestselling self-help book "How to Win Friends and Influence People" by Dale Carnegie to manipulate his followers.

Not only did he intensely study the bestseller, Manson also took classes given by the Dale Carnegie Institute while in prison. No one could have predicted that the information in the popular book, which was geared toward sales and business people, would prove to be dangerous in the wrong hands.

4) Family Members were forced to adhere to Manson's bizarre rules while staying at Spahn's Ranch.

Books, calendars, watches, and clocks were just some of the items banned from the ranch by Manson. Family members were also not allowed to wear eyeglasses. Manson claimed this was because he wanted them to see the world in its natural state.
More obviously, Manson preferred his followers to be uneducated, unaware, and unable to see reality. Yet none of these red flags could penetrate the sick dedication taken on by many of his followers.

5) Sharon Tate begged for the life of her unborn baby.

According to fellow Family member Linda Kasabian, Susan Atkins told 8.5 month pregnant Sharon Tate, "Look, bitch, I have no mercy for you. You're going to die, and you'd better get used to it." before stabbing Tate in the stomach and using her blood to write the word "pig" on the front door. Susan Atkins died in prison in 2009.

6) Although Sharon Tate and her guests were not Manson's intended targets.

When one thinks of the notorious Manson murders, one inevitably thinks of blonde bombshell and actress Sharon Tate. Beautiful, young, talented, in love, and with child, the actress' bright light was forever stifled the night of August 8th, 1969, along with four of her dearest friends. While many reasonably assume that Tate and her husband, Director Roman Polanski (who was out of town the night his wife was murdered), were targeted due to their fame and celebrity status, the reality is that Sharon Tate and her houseguests were not Charles Manson's intended targets the fateful night he sent his followers to the house on Cielo Drive in Benedict Canyon, California.

Manson felt snubbed by famous record producer and son of Doris Day, Terry Melcher, when he declined to work with Manson musically. When Charles Manson eventually sought his revenge, it is assumed that he didn't know Melcher had moved out of his home on Cielo Drive and subsequently rented it to Roman Polanski and his wife Sharon Tate.

Melcher's move was a result of his mother's concern for his safety after she learned that Manson had visited their home. The Hollywood Reporter explains:

The move was no accident... Terry, Doris' only child, was extremely close to his mom. He had told her about Manson — and about some of his scary antics, his brandishing of knives, his zombie followers — and that Manson had been to the house on Cielo, and she insisted he move out.

Doris Day may have saved her son and his girlfriend's lives when she demanded that they move, but Sharon Tate and her guests were not quite so lucky.

8) Although the Family did have a celebrity kill list.

While fame was not necessarily Manson's motivation for choosing 1500 Cielo Drive as the site of the Family's first murder spree, he did seek to gain notoriety by orchestrating the murders of certain targeted celebrities. Manson's celebrity kill list included the names of  Tom Jones, Elizabeth Taylor, Frank Sinatra, Steve McQueen and Richard Burton.

9) Manson defended himself in his murder trial and intentionally chose a notoriously boring defense attorney to assist him in his case.

In true narcissistic fashion, Manson defended himself in the trial, with assistance from attorney Irving Kanarek. Needless to say, Manson failed to manipulate his way out the criminal justice system.

Apparently, his sidekick defense attorney was known for being intolerably boring. Manson thought this would somehow help him in his case, but it resulted in jurors asking for "No-Doz" and Manson eventually screaming at his attorney in court, shouting, "you’re just making things worse!"

10) While Charles Manson will go down in history as one the most notorious serial killers of all time, he never actually committed murder.

While Manson was convicted of first-degree murder for directing the deaths of the Tate and La Bianca victims and sentenced to death (a charge that would later be commuted to life in prison upon California's abolishment of the death penalty), he never actually physically killed anyone. All of the "Manson murders" were carried out by Manson's Family members upon his orders. Manson was not even present during the Tate and La Bianca slayings.

11) Yet it's believed that Manson and his Family could be responsible for up to 35 deaths.

According to Biogrpahy.com, "Most of their cases were never tried, either for lack of evidence or because the perpetrators were already sentenced to life for the Tate/La Bianca killings." And the killings didn't stop once Manson was behind bars...

12) Manson's ex-attorney mysteriously died after he dumped Manson to represent another Family member.

Ronald Hughes dropped Manson to solely represent one of Manson's Family members instead. While Manson was behind bars, Hughes mysteriously went missing while on a camping trip. Eventually, Hughes body was found. It's believed that the remaining Family members murdered Hughes to get Manson his revenge. Although, no charges were ever officially filed.

Charles Manson had at least three sons. While little is known about Manson's second and third born sons, Manon's first son was named Charles Manson Jr., but for obvious reasons had since changed his name.
But even changing his name and being adopted would not be enough for the firstborn son of Manson to escape his father's evil legacy.  Charles Manson Jr. ultimately committed suicide in 1993.

14) As the 50th Anniversary of the Manson Family murders approaches, Hollywood revisits the dark and brutal crimes.

On August 9, 2019, the 50th Anniversary of the Tate murders, Quentin Tarantino's Manson movie will be released. The film is set to star Leonardo DiCaprio along with Margot Robbie as Sharon Tate. Tarantino's film is not the only retelling of the Manson murders soon to hit theaters. Another film about the Manson murders by Director Mary Harron, creator of American Psycho, is also in production.

15) Charles Manson has been on ice for over three months while at least four people fight over rights to his dead body.

While we all can breathe a sigh of relief knowing that Charles Manson died in prison on November 19, 2017 at the age of 83, the murderous mastermind is still a source of contention even from the grave. Nearly three months after his death, Manson's body remains on ice as at least four different people fight over rights to his body and estate. All four individuals claim to possess Manson's true and final will. Two separate individuals claiming to be Manson's estranged sons, one individual claiming to be his grandson, and one supposed friend of Manson, all plan to battle it out in court for rights to Manson's legacy. The courts are calling the situation a "circus," and we can't help but cringe knowing that this is exactly the kind of sick attention that fed Charles Manson's ego while he was still alive. He may have died, but the dark shadow of Manson's life continues to haunt this world from beyond the grave.