15 Celebrity Couples We Totally Forgot Were a Thing | 22 Words 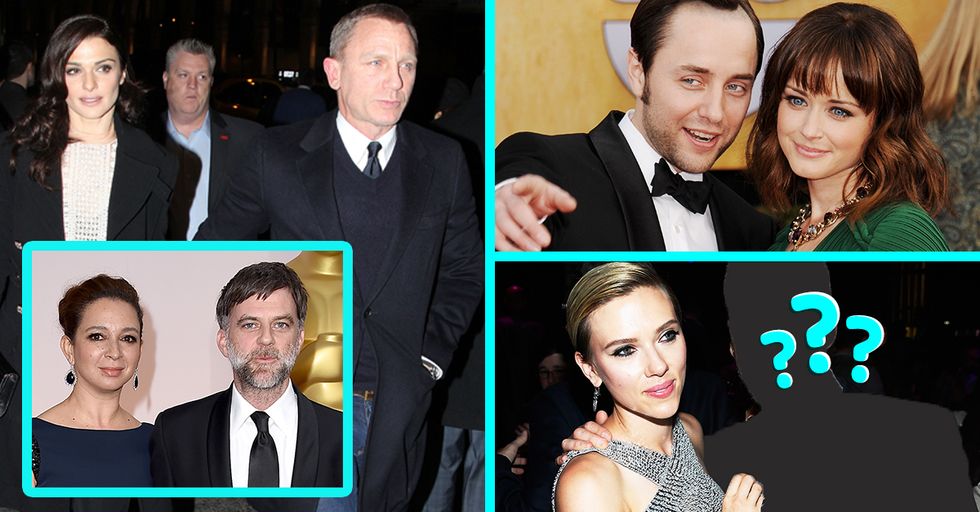 15 Celebrity Couples We Totally Forgot Were a Thing

There are celebrity couples that are practically joined at the hip — I'm talking the Kristen Bell and Dax Shepards, the Sarah Michelle Gellar and Freddie Prinze Jr.s, the Beyoncé and Jay-Zs.

But then there are other celebrity couples that don't appear in public together often or are just kind of private people who don't talk about themselves a whole lot. These are the couples that, when you see them, you cock your head to the side and say, "Oh yeahhhhhhhhh. Man, they're great together."

This whole thing started because P.T. Anderson did a Q&A on Twitter and someone posted this photo of him and his wife Maya Rudolph, which I always forget is a thing! But it's a great thing, and so was his response to this picture: "OH MY GOD LOOK AT THE HAPPY COUPLE. What the f is this? We look like we're going to kill someone. I don't know what that is in my pocket. Probably the back of a magazine? Holy Jesus. Can we remove this picture from the world?"

Don't you just think they are probably awesome parents? I would like to be adopted by them temporarily (as I still really like my real parents).

Yes, this is a real thing. The Black Widow is dating the SNL Weekend Update correspondent. It's a match made in "Huh?" but I'm not going to pretend I'm not stoked about it.

I don't know if you know this, but Rory Gilmore is married to Pete Campbell and they live an extremely private life and they have a little baby boy!

Staying on the Mad Men train, remember how Joan's been married to the guy I know as the guy from The Ringer and Bubble Boy? Yeah, it's a thing. And they are supes cute.

Rachel Weisz used to be married to Darren Aronofsky, but they split and then he fell for Jennifer Lawrence (even though that's over now). But I think she came out on top because she snagged herself a James Bond!

You don't really think about Borat being married to anyone, but these two are actually adorable. "His wiiiiife" is gorgeous and they're the best.

This may be the fiercest couple in Hollywood and I love them so much and I always forget that they are together and it's always a delight to remember.

Are these not the two most beautiful people you've ever seen in the world?! I became a fan of Bobby Cannavale way back in the days of The Station Agent, and Rose Byrne makes me mad because she's so beautiful but also so so funny and like, couldn't she have just picked one?

They played siblings on Parenthood, which is a skosh strange, but it doesn't take away from the fact that this is the most wonderful pair in the world. They rarely show up at events together; they're super private about their relationship, and you know what? They deserve to be.

Yes, that's Marcus Mumford of Mumford and Sons. This is like the most musical, English couple in all the land, and I'd like them to sing me lullabies at night, thank you very much.

Funnyman Andy Samberg has been married to singer/songwriter Joanna Newsom in 2013. They had a little baby girl about six months ago and she's probably going to be the coolest person on the planet.

I think the reason we don't think about Javier Bardem and Penélope Cruz being a couple too often is that they are just too beautiful and if we look at them for too long we will literally be blinded by their beauty. And that's my theory on that.

The fact that Leighton Meester and Adam Brody got married was like every girl-who-grew-up-in-the-2000s' dream come true. It gave us hope and faith that TV is actually just like real life and that we will find our "happily ever after." It was totally deceptive and we've all learned some tough lessons since then, but that's life, right?