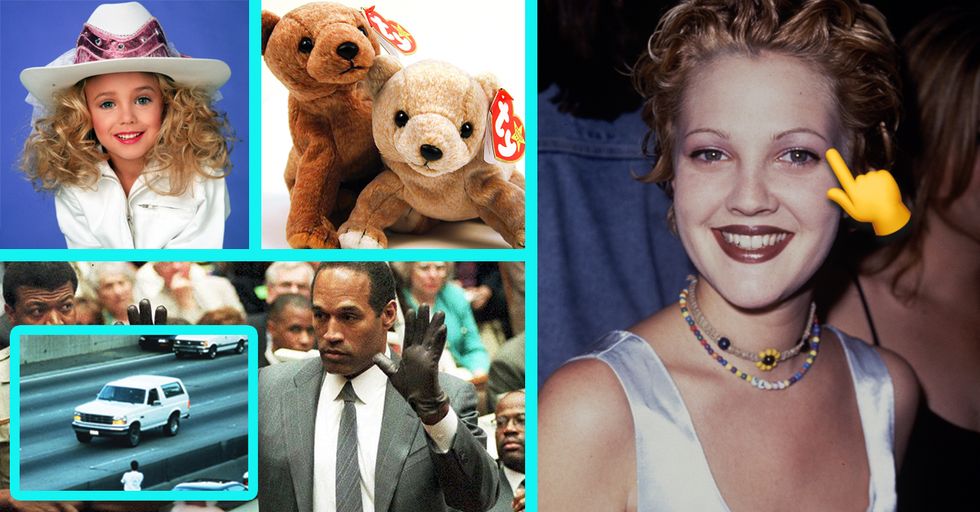 The '90s was a magical decade filled with Lisa Frank rainbows and Lisa Frank unicorns. (There was a lot of Lisa Frank.)

It will also go down as one of the most transformative decades in American history. We have the Internet to thank for that. And Al Gore. (Thanks for the Internet, Al Gore!)

There's a lot about the '90s to love — if I had it my way, mom jeans would be in style forever — but there were also a bunch of things about the decade that looking back, were totally bonkers. We thought these moments in pop culture and news and politics were normal at the time, but hindsight is 20/20, and it's a good thing because now we can see how bats*** we were. Ah, the '90s.

Grown men and women purchased hundreds or even thousands of tiny stuffed animals because they thought they'd be worth millions of dollars someday. It's amazing, but we all really did go collectively insane when Beanie Babies hit the shelves.

How we ever thought chat rooms were a good idea, I'll never know. Sure, now there are dating apps and sites, but somehow those feel different, less anonymous, less insidious. Do you remember what happened if your parents found out you were hanging out in chat rooms? Weeks of TGIF, gone in the blink of an eye.

I can't believe we would spray something called I Can't Believe It's Not Butter on our food and then eat it. It was simultaneously amazing and terrible.

We really thought the world might end. Guys. We were so dumb.

The caption for this Getty image of Donald Trump on Jay Leno's show refers to Trump as a "TV personality/investor." If only that's still what he was. If only.

Look at this thing. It is insane. Why were they everywhere? Why did they have little jewel belly buttons? What was their purpose? The shape of a troll doll's head is not a head shape found anywhere in nature. What were we thinking, people?

We watched a straight family sitcom on which all the characters were anthropomorphic, human-sized dinosaurs that lived in a house. And we were just like, "Yeah, that's cool."

Woof. The '90s were great for a lot of reasons, but one of those reasons was not Bill Clinton's "Don't Ask, Don't Tell" policy to address gay people in the military. What a bummer of a thing we just sort of accepted for a while.

Athletes Being the Biggest Celebs in the Galaxy

There was no bigger celebrity in the '90s than Michael Jordan. In fact, all of the Chicago Bulls were recognized and loved by everybody. They were in movies, in commercials, in toy form in McDonald's Happy Meals. They were true superstars. Today? Nothing like that.

Wowee did we have some bad judgment in the '90s when it came to fashion and style trends. Overplucked eyebrows were definitely one of the worst. Thankfully, Drew Barrymore's (and my!) eyebrows recovered nicely, but man oh man was that a mistake.

Speaking of terrible fashion trends, JNCO Jeans everybody! Are they pants or tents? Slacks or two skirts sewn together? We may never know for sure.

Waterbeds were around way before the '90s, but they were still considered pretty dope back then. It didn't dawn on us until later that water is literally the worst material to make a bed out of.

Who in the world wanted to listen to a one-minute long clip of your favorite songs and then not the rest of them?! What. This is more of an affront to music than mp3's and in-ear headphones and any of the other stuff music nerds get upset about.

O.J. Simpson! Lorena Bobbitt! Joey Buttafuoco! JonBenet Ramsey! The '90s were chock full of simply bonkers real-life stories, and it seemed like they happened all the time. But we just accepted it! We just went, "Oh yeah, no biggie, there goes the woman who chopped off her husband's penis and threw it in a field!"

Think of the playground in the '90s and all the terms that got thrown around as insults that would never ever ever ever ever ever ever be acceptable to say today. The '90s may have been great, but it's a good thing we've moved past calling Melissa "gay" because she wouldn't go down the big slide.