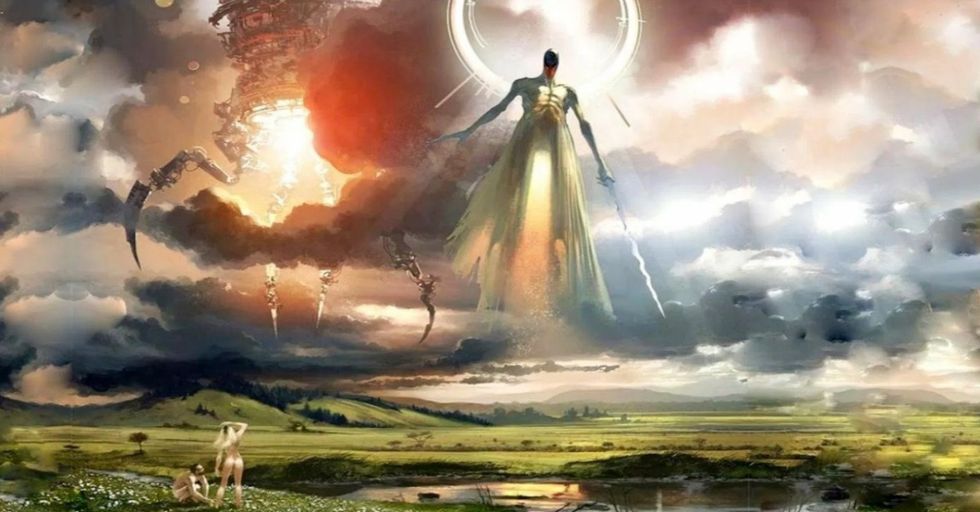 There are countless juicy conspiracy theories that have captured the minds of the paranoid and the morbidly curious for decades. Some of them are well-known. All of them are eye-roll-inducing.

These are the lesser known of the bunch, but they are so eye-roll-worthy that I'm pretty sure this list is what eye rolls were invented for. Enjoy.

via: The Online Scum

If you believe the moon landing was fake, sure—you do you. But some conspiracy theorists make the full-blown claim that the moon doesn't exist at all. It's not there. That the big bright thing you see in the sky at night is actually a hologram or a large balloon. I urge you to dig deeper into the theory by visiting The Mad Revisionist. It includes gems like: "What evidence do you have that there is no moon? You should be asking what evidence do we have that there IS one." Hard to argue with that logic.

Undeniably ridiculous. Bigger Luke is the conspiracy theory that Luke Skywalker's appearances in the Star Wars trilogy are consistent except for certain scenes, where a slightly bigger Luke appears in Regular Luke's stead. The size of Luke is generally "measured" relative to the height of Han Solo, usually with no regard for spatial awareness or the idea that humans can bend. There are a couple theories as to why Bigger Luke is a thing. One theory purports that Bigger Luke is actually an accepted part of Star Wars canon. The other theory is that a Mark Hamill look-alike was used in these scenes. My theory is that these people be crazy.

Like the Paul Is Dead theory, there are some who believe that Avril Lavigne died in 2003 and was replaced by a body double. According to a Brazilian blog, Lavigne hired a look-alike named Melissa Vandella to distract paparazzi for her, and then killed herself in 2003 after the death of her grandfather and a bout of depression. The doppelgänger was told to carry on as if she was Avril, and that apparently explains the slight changes in Lavigne's appearance in the last fourteen years, because, you know, aging isn't a thing. Wow, things got "Complicated."

This one's for all the One Direction fans out there. There is a conspiracy theory that the baby Louis Tomlinson reportedly had with Briana Jungwirth actually didn't exist at all and was a fake cover for his down-low romance with Harry Styles. A girl can dream, can't she? If you read all the evidence, it's actually kind of suspicious. But if you look at these more recent pictures of Louis and his son, the only strange part is how pixelated his kid's face is (KIDDING. I know his face isn't actually pixelated).

The Satanic Undercurrent of "American Pie"

Apparently, Don McLean's song (that we all belt out when it's on the radio) actually predicts the satanic communist takeover of America after a nuclear explosion that destroys the ecosystem. This bright teal website from approximately 1992 lays it out pretty squarely. Basically, the theory purports that if you substitute the word "America" for "Miss American Pie," as in "bye bye, America" the song clearly becomes about the destruction of the United States as a free nation. Sure, if you change the words to the song, you can make it mean anything. If you replace "Miss American Pie" with "Banana Cream Pie," the song suddenly becomes about running out of dessert.

April, the Month For Government-Sponsored Human Sacrifices To a Demon God

via: All News PipeLine

According to crazy people, the second half of April, during which an admittedly unusual number of tragedies have happened over the years (Oklahoma City bombing, Columbine High School shooting, Virginia Tech shooting, Boston Marathon explosions), is actually a period of government-sponsored ritual human sacrifice to the demon god Baal. Yep. I've got to repeat this because it's just so insane. Some people believe that historical tragedies that have happened in the month of April were actually orchestrated by the United States government as a ritual sacrifice to a demon god. They call it the "Blood Sacrifice to the Beast," because of course they do. If it's true, though, that is one sick April Fools joke.

I love this theory not only because it tosses the Bible out the window, but also because it involves aliens. Conspiracy theorists believe that Adam and Eve were extraterrestrials who traveled to Earth on a space ark...yeah, Noah's space ark. Honestly, this makes more sense than a man in the sky just making the first people out of nothing. And there's apparently a bunch of evidence in ancient texts that aliens created the human race. Ooh, I hope this one is true!

This genius theory purports that NASA invented thunderstorms to cover up the sound of space battles. Someone on Reddit pointed out that's impossible because thunderstorms have been around since before NASA, but then another genius made the counterpoint that NASA could have also invented time travel, thus making it possible. Think before you negate awesome conspiracies, people.

It's a fact that dolphins are one of the most intelligent animals on Earth—possibly more intelligent than humans, at least in some respects. (When you develop echolocation, you let me know.) It's a conspiracy theory, however, that dolphins are low-key scheming to take over the world and eliminate mankind. Suddenly, Flipper doesn't seem like an innocent kids' movie anymore.

This is hands down my favorite conspiracy theory in the whole wide world. This is complicated, so stay with me. The theory is that rocks are actually squishy, but they tense up right before we touch them. If you think about it, there is literally no way to prove this theory is wrong.

Justin Bieber Is a Lizard

One of the most popular conspiracy theories is that the most rich and powerful people in the world are actually lizard people. Twelve million Americans believe this. But I didn't realize until recently that Justin Bieber is one of the Chosen Reptiles! The whole theory was started by an article supposedly published (then taken down) by Perth Now claiming that hundreds of fans saw Bieber transform into a scaly monster at one of his concerts in Australia. Another website claims Bieber slipped up again at an airport and showed his true, lizard-y self. There was a video, but it was taken down as it would be in any cover-up.

The "Man Will Never Fly" theory asserts that we never actually learned how to get a plane into the sky and that any plane you think you've been on is actually just a super fast bullet train. This means that instead of researching and developing flight technology, the entire world has conspired to create fake skies, fake birds, hire fake pilots, and hide an entire network of crazy long train tracks. Which is more likely?

Yoga Is a Form of Satanic Worship

Some fundamentalist Christians seem to believe that yoga is a form of satanic worship. They believe that the ultimate goal of yoga is to set up the mind and body to be taken over by demons. Sure, yoga is a combination of ancient mental, physical, and spiritual practices that originated centuries ago in India, but it's also become an excuse for moms to wear very expensive stretchy pants and drink green juice. Hmm, maybe I just proved the conspiracy theorists' point...

Breaking Bad Is a Prequel To The Walking Dead

This pop culture theory is actually awesome. Some believe that Walter White's increasingly popular blue crystal meth is responsible for the zombie apocalypse in The Walking Dead.  But there are some concrete examples that actually support the theory that the two shows exist in the same universe. In The Walking Dead's first season, Glenn drives a red Dodge Challenger, which looks very similar to Walter White's car. Then—here's the kicker—in season two, Daryl needs to bring down T-Dog's fever, so he rummages through his brother Merle's drug stash to see if anything in there will work. There's a whole bunch of blue meth pictured clearly at the bottom of the bag (pictured). Add to that the fact that Merle was a drug dealer before the zombie apocalypse happened, and that he described his supplier as "a janky little white guy" who threatened him with a gun and said, "I'm gonna kill you, bitch!" and you've got yourself a verified Jesse Pinkman/Breaking Bad crossover. Add to that the fact that the guy who plays Merle is literally blue in Guardians of the Galaxy, and now we're getting out of hand...

The Flintstones Takes Place In a Post-Apocalyptic Future

Finally, The Flintstones obviously takes place in a post-apocalyptic future at the exact same time as The Jetsons, which is happening in the sky above them, and you will never convince me otherwise. How else would you explain how the Flintstones use the materials at their disposal (stones and animals mostly) to replicate modern technology? Also, the Jetsons live in Orbit City, built above the clouds. What could be happening on Earth below them? Obvs The Flintstones. And not to mention the obvious, but The Great Gazoo is an actual alien character on The Flintstones who's exiled to Earth from his planet as a punishment for inventing a doomsday machine. Presumably, The Great Gazoo is responsible Fred Flintstone having to sleep on a rock bed in Bedrock.