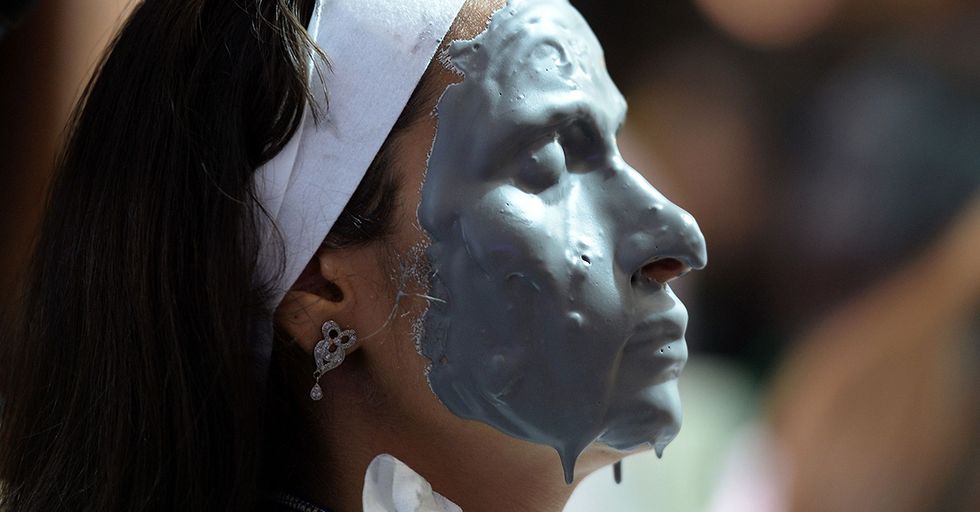 In an attempt to win a buttload of cash, contestants on the gloriously gross game show Fear Factor willingly ingest some seriously disgusting things on television.

You, on the other hand, actually pay to unknowingly ingest the same nasty stuff through the cosmetic ingredients in your beauty regimen on a daily basis.

Don't panic; it's all organic.

But if bugs, scales, animal grease, urine, feces, semen, lard, placenta, foreskin, and vomit aren't the ingredients in your ideal beauty regimen recipe, prepare to gain a disturbing new perspective of the beauty industry and officially lose your appetite.

Here are 15 cosmetic ingredients that make your beauty regimen grosser than an episode of Fear Factor.

If you're not exactly a fan of escargot, you may not be thrilled to learn the source of these common cosmetic ingredients. Glycolic acid and elastin derive from mucin extract, a cosmetic ingredient less popularly known as snail mucin, or snail secretion filtrate. Many beauty brands claim that snail secretions moisturize skin and reduce the appearance of scars and hyperpigmentation. Gourmet Skin Bar reports that the Ancient Greeks used snail slime for cuts and burns and later on Chilean farmers found their hand left silky after being slimed by snails. Since then, snails have been all the rage in Asia and South America.

Despite the sticky ingredient's long history and avid following, "To date, no substantial clinical studies have been done to actually evaluate the effects of snail slime on human skin, or to compare these products to other beauty products on the market." Pardon? No legit studies exist, yet people are still slathering themselves with snail slime?

Well, as I always say, to each his own.
Considering cosmetic products containing the ingredient "mucin" are now sold nationally at retailers ranging from Target to Saks Fifth Avenue, you very well may have smeared snail secretion on your face a time or two without even realizing. But don't knock it 'til you've stepped on it and sampled it.

Well, we've heard it all, people. That's it. We can now officially resign from reality as this beauty product ingredient defies comprehension. Infant foreskin is now deemed by some to be the "fountain of youth." The good news is that not being able to afford something is an advantage for once. Well, you didn't think the fountain of youth would be affordable, did you?
According to Today, "The foreskin, obtained from circumcisions, promotes new skin growth." Fortunately, the bourgeoisie is spared the privilege of partaking in the cosmetic ingredient Oprah Winfrey swears by. Oprah received quite the backlash for her promotion of this controversial cosmetic ingredient- which, in case it hasn't been made 100% clear- is penis. The ingredient is baby penis. The last sentence is not one that I ever imagined writing in my lifetime, but I just need to make sure we're all in the same twilight zone.

Are you looking for a protein-rich conditioner for your dehydrated hair? Look no further. Apparently, bull semen is what you've been missing in your life. The conditioning treatment is extremely popular in the UK and is now also available in the US. Don't we deal with enough bull shit already? Must we now add bull semen to the list?
But that's not all bull semen has to offer. The potent protein also works wonders as an anti-aging ingredient used in moisturizers as it is said to be 30 times stronger than Vitamin E. According to How Stuff Works, you can now have bull semen discretely delivered right to your door. There's a lot of weird shit you can have delivered these days, but bull semen for your face wins for creepiest package.

The beauty industry is having a field day with our generations growing population leafy and green granola moms. First, they tried to sell moms back their own placentas in pill form; a trend that is basically cannibalism if you really stop and think about it. Yet, many moms bought into the yucky trend until a recent study found that there is no evidence to show that eating placenta will benefit your health. So now they're trying to sell us animal placenta, specifically, sheep placenta, to "help skin rejuvenation and collagen production." However, Dermatologist Patricia Farris tells Allure, "None of them have been tested, and nobody has even looked at what's in them very scientifically." Apparently, several celebs didn't get the memo; Simon Cowell, Donatella Versace, and Victoria Beckham all are reported to have tried "the sheep placenta facial."

Bird poop is yet another cosmetic product ingredient that doesn't practice full disclosure when it comes to labeling. Apparently, birds now prefer their crap be exclusively referred to as "Nightengale Excrement."

Well isn't that lovely... and a total load of bird shit.

You can thank birds for sharing their elite product, thus providing you with cleansed skin and a radiant glow. You should also thank them for all the free samples they constantly leave on your windshield.
And if you weren't sufficiently grossed out yet, here's a little TMI from Today on the subject. "The songbird's feces differs from that of most mammals because, like other birds, nightingales have only one hole, called the cloaca, through which they excrete both liquid and solid waste. “The poop contains nitrogen-rich urea and guanine, an amino acid... Urea helps to bind moisture to the skin, thus making the skin look and feel hydrated." Oh perfect, now it only takes "one hole" to wash your face with both piss and shit at the same time. Up until now, the two-step process was just so time-consuming. So grateful that we can now kill two birds with one soap.

Do you just love a musky perfume? Well, that's about to change. According to PETA, “Musk oil" may sound like a fancy name for a fragrance, but it’s just dried secretion that’s painfully obtained from musk deer, beaver, muskrat, civet cat, and otter genitals. To obtain musk oil, beavers are trapped, deer are shot, and wild cats are kept captive in cages in horrible conditions and are whipped around the genitals to produce the scent." Goodbye, Givenchy, Shalimar, and Lancome. We're going for classy, not assy.

While scientists still don't know whether Sperm whales expel this coveted mystery crap from their front or rear ends, it's a distinct possibility that you've been dousing yourself in it daily. It's insanely heavy and even more expensive. It looks like a rock, smells like shit, and also happens to adhere scent to human skin. It's ambergris. Although it's illegal to manufacture ambergris in the US, National Geographic reports that high-end perfume brands, like Chanel and Lanvin, are produced outside of the US and still use the enigmatic whale poop-slash-puke ingredient to keep you smelling classy for as long as possible.

Time to scan the ingredients of your fave go-to red lipstick. If it lists Carmine, what they really mean is crushed beetles, specifically, Cochineal Beetles. Catch, boil, dry, crush, apply to lips, and done!

According to Ilise Carter of Racked.com, animal fat is the latest trend in skincare, and surprisingly it's not all that vegan. In fact, it's rather paleo. If you subscribe to the "Paleo Beauty" philosophy, coconut oil is yesterday's news, and organic is so dead to you. You are all about that about that grass-fed tallow. Tallow is derived from slowly heating the fatty tissue of grass-fed cows, mutton, or bison. According to Sweet Living Co., "This results in clean, pure, high-vitamin oil with a fatty acid profile similar to that of human cell membranes. It is ultra rich in the same kinds of lipids ... also contains fat-soluble Vitamins A, D, E & K and Vitamin B12." Society's successful securing of certain rights for farm animals has revealed itself as two-fold. Thanks to the animal rights movement, we now that have a surplus of healthy farm animals and not a clue what to do with them! So, apparently, we get to grass-feed our tallow and eat it too. But when that gets boring, we can always smear animal flesh on our faces, brush our teeth with it, and call it a movement.

Do you use lotion, make-up remover or wear lipstick? Then you use sheep grease. This substance is extracted from the fur of wool-bearing animals like sheep and used as an ingredient in cosmetic products to soften your skin and make your lip color last. However, retailers refer to it as "lanolin." Hmm, we wonder why. While lanolin is considered a cruelty-free cosmetic product ingredient that comes from the wool of sheep, this is a matter of great debate. Animal activists take issue with the fact that sheep are kept alive solely for the production of lanolin and eventually slaughtered for their meat. Perhaps we're all beginning to finally see the beauty industry as a wolf in sheep's clothing. The issue of animal cruelty is a serious one, so I won't make a baaaaad joke about it.

Holy Mackerel. Talk about being hit by the latest trend. Fish scales, existing under the alias "guanine," are the ingredient in makeup and nail polish responsible for making your eyelids glisten and your nails sparkle in the sun. Oh ya, by the way, that new shimmery lip gloss you love is also loaded with fish skin. And your highlighter and your blush are full-o-fish, too. When it comes to cosmetic products, if it sparkles, at one point it swam.

If you wouldn't let your kids swim in it, please don't brush your teeth and scrub your face with it. If you see "diatoms" as an ingredient in your toothpaste, deodorant, powder, or exfoliants, you've been unknowingly enjoying dead algae. Its abrasiveness also makes it an ideal ingredient for bathtub cleaners and fertilizer. So maybe skip the diatoms on your face and teeth and save them for cleaning your bathroom and doing yard work instead.

Shaving cream, sunscreen, and hairspray products often contain oil from minks or emus. According to Today, this oil is "obtained by scraping fat from the back of the hide of the animal." Another time-saving innovation from the beauty industry. Merely scrape the fat off the hide of your mink's back for your skin softening pleasure, then simply throw the scalped shawl over your shoulders and, voila, you're ready for a night out on the town. We shudder to think what they'll come up with next.

While "musk oil" is derived from several animals' genital secretions, "civetone" is the secretion of the Civet Cat's perineal gland-  their butts. So yeah, you're definitely going to want to check your perfume's ingredients for cat ass. And to the farmers who've literally been scraping the anal glands of civet cats so our perfume would last all day... Thanks? But, no thanks. And please stop. Where we go from here remains to be seen. We all have some labels to check, emotions to process, and bouts of nausea to get through. And after that, knowing what we now know, I guess there's really only one reasonable thing to do... Audition for Fear Factor.