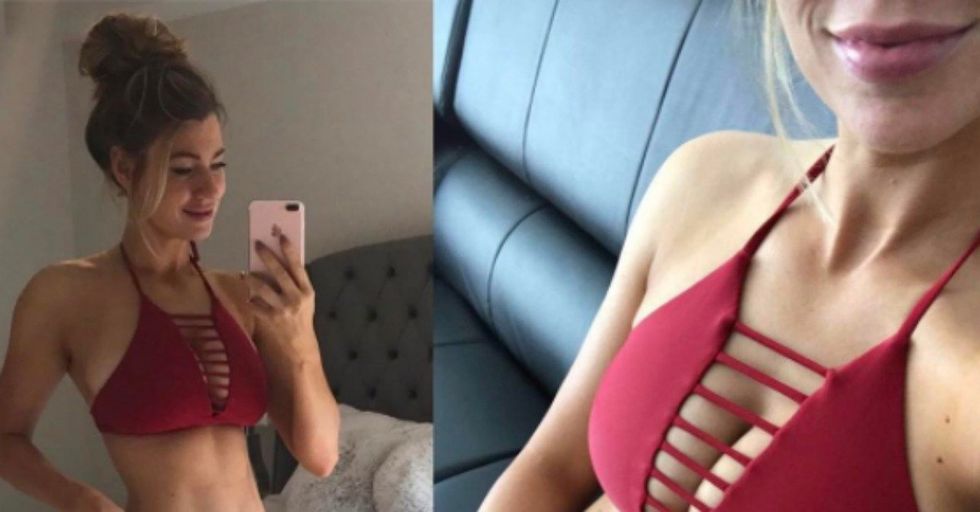 I'm not a selfie person, but that puts me in exclusive company. Most people take about a million selfies every day, and pick the most flattering ones to share with the social media world.

The problem some people see is that when you keep your bad angles off the Internet, you trick people into thinking you have no bad side, no flaws — a misconception that can end up making others feel really bad about their own imperfections.

That's why some Instagram-famous fitness women have taken to posting photos of their worst angles taken mere seconds, minutes, or hours apart from an otherwise flattering shot — and they're getting all the likes because of it.

Although the photos above were taken seconds apart, this 20-year-old based in Finland, posted them side-by-side to show her followers how she looks when she's not posing for Instagram. She pulled off this "transformation" by flexing her core, changing her pose, and standing in brighter light.

Bikini Body Guide founder and personal trainer Kayla Itsines jumped on the fake 30-second transformation trend by posting one of her own. Her message: People who exaggerate their before or after fitness challenge photos only fake out themselves — and probably put too much emphasis on how they look as opposed to how they feel.

She's had three kids and has stretch marks from her pregnancies. Her pictures serve as proof that again, it's all about those angles — and everyone should give themselves a break and embrace their "imperfections."

Bettencourt has racked up more than 30,000 Instagram followers by posting photos of her rippled abs and the healthy foods that fuel her. But the photos above prove that (like most people) she's no stranger to occasional bloating, and that no one maintains a six-pack every minute of the day.

These two photos were taken just 30 seconds apart. It just goes to show that sucking in, standing tall, and flexing — things so many women do to camouflage their "flaws" in photos — can drastically affect your appearance.

When she went to bed, she was bloated — but she woke up the next morning with some pretty impressive abdominal definition thanks to a few hours of sleep and digestion.

Bikini contest competitor @EllaFitness_ posts lots of progress photos leading up to her competitions. But the ones above don't reflect the hard work that goes into prepping her body in season — they show the fittest women you see in photos are probably flexing hard.

Fitness trainer Emily Skye, who has 1.8 million Instagram followers, will tell you that simply standing up straight can transform the way your stomach looks in photos — and her transformation video, in which her abs appear out of nowhere, just drives this point home.

This model proves the most flattering fitspo is often the result of striking a pose. And because no one walks around with their pants hiked up, zero air in their lungs, and legs parted to manually create a thigh gap, no one looks "fitspirational" 24/7.

Model and law student Laura Henshaw simply pulled up her pants in the photo on the right. Her faux-fitspo is a warning to all that what you see on social media can be quite a departure from that which appears IRL.

A personal trainer on The Biggest Loser, Widerstrom posted the photos above just minutes apart to show that people with six-packs still see stomach rolls when they sit.

Model Iskra Lawrence first posed with her legs together, and then again with her legs parted to feign the ridiculous "thigh gap" and prove that what you see on social media can be a far cry from what exists in real life.

This Bikini Body Guide girl and mother of three shared her side-by-sides as a reminder to give herself a break — an awesome message for anyone who's ever actually taken a picture of themselves before.

Personal trainer and fitness blogger Sophie Kay took two photos of herself three minutes apart to show her followers how posture and an outfit change can trick the heck out of the Internet.

The Instagram fitness star behind the popular Fit Body Guides shared side-by-side before-and-after pics to show how her stomach looks regularly (right below) versus the one percent of the time when she's posing for photos. Do these women look damn good no matter what pose they're in? Of course, but the point is that what you see isn't always what you get. If you're feeling in the crapper, just know that nobody is perfect. Now go and get snapping.