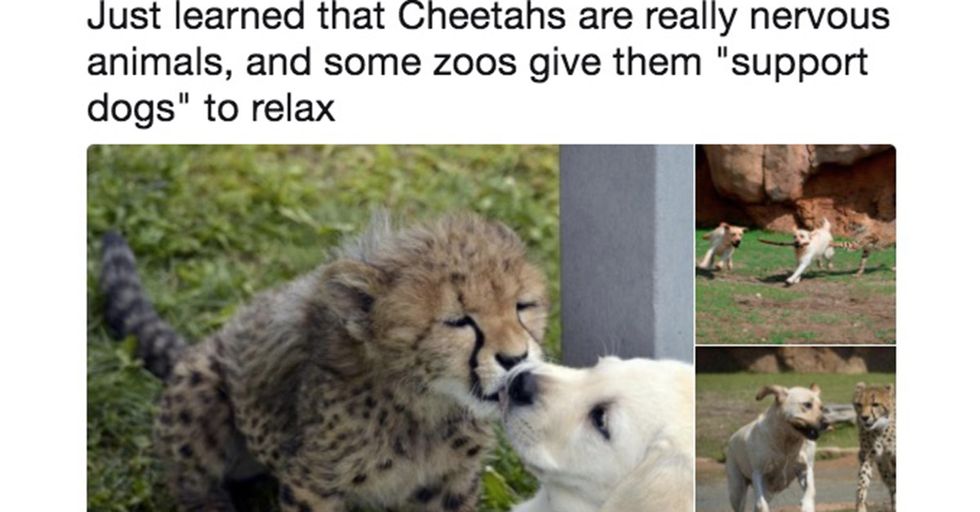 Unless you've somehow been living underneath several rocks, you're probably aware of the social discord spreading throughout not only our country but the entire world. We don't want to diminish the importance of that in the slightest, but sometimes you just need a break from the constant media barrage.

Luckily we're here to help! Take a look at these 15 totally adorable animal tweets and we'll all feel better together...for a little while.

Look at this little bird discover his passion for drumming.

It's always great when someone (or some animal, in this case) discovers they have a passion for something, but it's even better when you look at how cute that freakin' bird is.

Everyone likes a nice vacation, right?

But oh my god look how excited this dog is to be allowed to jump on this bed. You can tell he's a good boy because he's reluctant to jump on the bed at first, but once the owner convinces him it's just too dang precious.

Do you know how cute foxes are?

The answer is really freaking cute. We know they're wild animals and all, but to have a pet fox? That would be the dream.

Occasionally you'll see an adorable video of a dog or cat that had prosthetic hind legs, but you've never seen anything like this:

A goldfish wheelchair. It doesn't get any more delightful, folks.

Apparently humans aren't the only ones with anxiety issues.

If baby cheetahs playing with puppies is the cutest damn thing ever, then the only other thing even close to it is this next one...

Every single one of us wishes we had a relationship like Ralph and the neighbor cat's.

Get you a partner who waits for you the way Ralph waits for his pal. That's true love right there.

This is the cutest pic we've ever seen.

Are these even real? They look like stuffed animals!

Now, let's look at this whale make a rainbow!

That's not photoshop or your mind playing tricks on you. It's nature at its finest.

Sometimes when you're stressed out, you've got to put bunny ears on your cow.

Cause, you know, reasons. And things.

Humans aren't the only ones who love cats. Look at these dogs.

This dog was adopted by a monastery and it has its own little robe and everything. Excuse us while we explode with joy.

Dogs are so loving. They appreciate everything you do for them.

Even this big furry friend showed his appreciation by making an extra tiny dog bed work. Look how much he loves it!

Dogs and cats aren't the only cuties in the animal kingdom.

And now we will never forget about baby alpacas again. Never.

Have you ever seen a baby flamingo?

Because now you have, and you're way happier because of it. He's trying so hard!

We will leave you with this smiley gecko and his toy doppelgänger.

It's a tough world out there, friends. At least we have animal pictures.