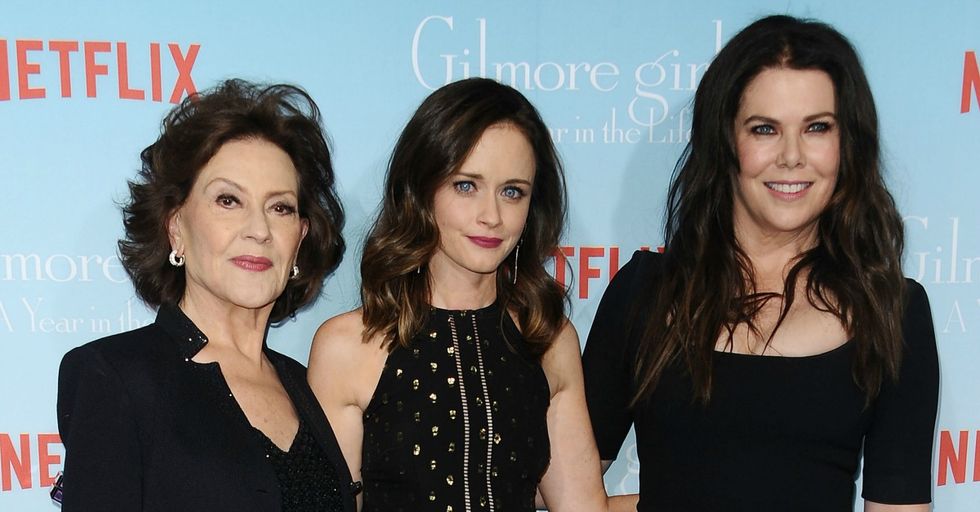 We're not saying anything too controversial when we make the claim that Gilmore Girls is the best show in the entire universe. Even if there are other galaxies with other life forms—and those other life forms also make television shows—we are certain that none of them compare to Gilmore Girls. The show is utterly re-watchable, always heartwarming, and it just feels like home.

But no matter how many times you've visited Stars Hollow throughout the years, we bet there are a few facts, tidbits, and behind-the-scenes stories you probably don't know.

1. The show was inspired by GG creator Amy Sherman-Palladino's stay at an inn in Washington, Connecticut.

During a trip to New York, Amy Sherman-Palladino decided to stop in Connecticut, where she stayed at the Mayflower Inn in the town of Washington. It was so idyllic and friendly that not a day later, she'd outlined much of the show and even wrote some dialogue that ended up in the pilot.

Alex Borstein—who ended up playing Drella, the harpist on the show—was originally cast as Sookie, but she had to turn down the role because of scheduling conflicts with MadTV.  In real life, Borstein is married to Jackson Douglas, the actor who plays Sookie's husband (who is also named Jackson)!

Before she was cast as Rory, Alexis Bledel's only role was as an uncredited extra in Rushmore. She was going to school at NYU and modeling part time when she auditioned for GG. The rest is history!

4. Normally, one page of a screenplay equals one minute of screen time, but on GG

they talk so fast, one page only lasted 20-25 seconds. Scripts are usually 50-60 pages for a one-hour show, but for Gilmore Girls they were around 70-85 pages. That's a lot more memorizing those actors had to do.

5. Sometimes the cast members didn't get the pop culture references made by their characters.

On top of all the memorization, the cast didn't always understand all the pop culture references they had to make. Who could blame them? Rory and Lorelai's pop culture knowledge is unmatched by any living, breathing human being.

6. The character of Jess was added to the show to keep Luke and Lorelai apart just a little bit longer.

Luke and Lorelai were just too damn perfect for each other, so Amy Sherman-Palladino decided that they needed another roadblock. Enter Jess. "We're dealing with two people who, if they just opened their eyes and stared across the table at each other, would go, 'Oh sh--, it's you,'" Sherman-Palladino said. "So when you're playing that game, you have to find obstacles that are real to put in their way."

7. Jess almost had his own spinoff series.

It was going to be called Windward Circle. But it didn't happen because it was too expensive to shoot in Venice Beach, where the series was set to take place.

8. The character of Lane Kim was based on Amy Sherman-Palladino's real-life friend, Helen Pai. Lane's band Hep Alien is an anagram of Helen Pai.

How awesome is that tribute to ASP's real-life friend? Another little-known fact about Hep Alien is that they have a slogan: "We're out there." Makes total sense.

9. Ryan Gosling once auditioned for the show...and bombed.

At the Gilmore Girls Fan Fest, casting director Jami Rudofsky explained that she had cast a "handsome young man" in an indie film. She thought he was so talented that she brought him in to audition for a part on GG, but he bombed his audition and didn't get the part. That "handsome young" actor? Ryan Gosling.

There were so many characters and so much dialogue in the town hall scenes that they sometimes took full days to shoot. We're talking 13 hours minimum. Because they were such a time suck, the actors found creative ways to pass the time. Sally Struthers (Babette) invented a game called "What's In My Purse?" where cast and crew would have to guess what random things she had in her bag. But all that excitement doesn't compare to the Gilmore ghost...

11. Richard Gilmore visited the set of the GG revival after he died.

The GG revival was missing one important character: Lorelai's father, Richard. Actor Edward Hermann died before the series was shot. At the GG Fan Fest, Hermann's wife, Star Herrman told a story she heard from Kelly Bishop, who played the actor's on-screen wife, Emily. "When they first started filming the revival, Kelly kept waiting for Ed to walk through the door — his presence was such a staple on set that it felt so strange without him," Star explained. But one day when they were filming, "All the lights suddenly went out, and Kelly thought, 'Ahh. There you are, Ed.' It was clear that his memory and spirit is still very much with the cast."

12. Sean Gunn, who played Kirk, has a favorite out of all of Kirk's odd jobs.

Kirk, played by actor Sean Gunn, was one of Stars Hollow's most memorable residents. Of all the crazy jobs Kirk held, Gunn's favorite was the time he was a sports announcer for the hockey game. Apparently, calling a sports game had been somewhat of a lifelong dream for Gunn.

13. Rose Abdoo, who played Gypsy, believed her character had a crush on Lorelai.

Abdoo thought it was really obvious that Gypsy was crushing hard on Lorelai throughout the show. She explained that Gypsy lights up every time Lorelai enters their scenes, and Gypsy was totally on Lorelai's team when the town was picking sides for when (or if) Luke and Lorelai split up.

14. When characters are talking on the phone in the revival series, they're most likely talking to dialogue coach and the guy who played Professor Bell, George Bell.

George Bell was the dialogue coach on the show for years before he was cast as Professor Bell. He also played another very important role in the series revival—the person on the other line whenever characters are speaking on the phone. So when Lorelai is on the phone with Rory, she's probably actually talking to Bell.

15. Liza Weil originally auditioned to play Rory. The producers loved her so much that they created the part of Paris Geller especially for her.

What would Gilmore Girls be without Liza Weil? It wouldn't be the same show, we'll tell you that. And the producers of GG recognized that when she auditioned for the part of Rory Gilmore. While Weil wasn't right as Rory, they created a character just for her, and the legend of Paris Geller was born.