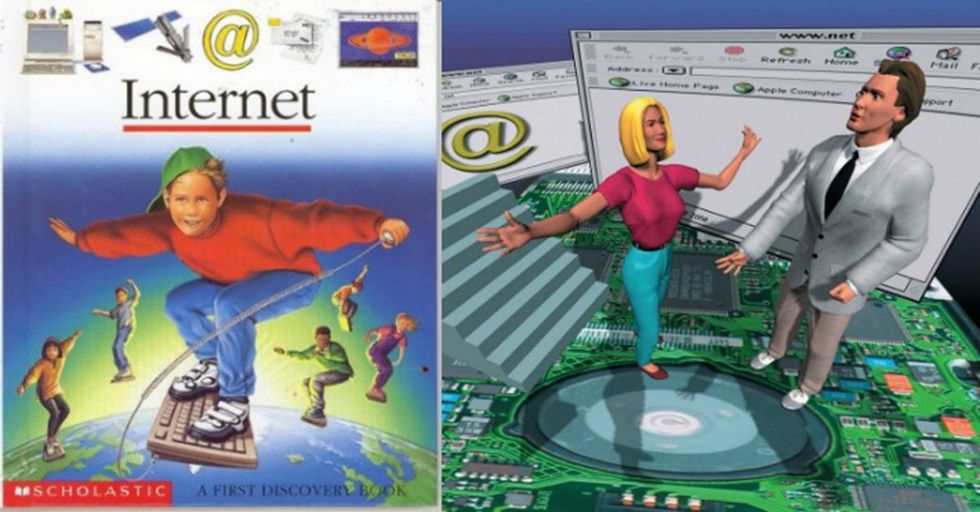 We take the Internet for granted now, since we're using it at fast speeds on tiny devices in our pockets. But in the late '90s, when it was still a novelty, things were pretty different.

Since we didn't depend on it the way we do now, we were willing to put up with some major hassles, ugly Web layouts, and many, many, many pointless websites. For those of you old enough to remember the early Internet, you might cringe a little when you see these pics. And for those of you who are too young...be thankful you skipped the awkward years shown below.

The only Internet available was dial-up through your landline.

And for most homes, that meant having to choose between getting phone calls or using the Internet. A tough decision for a kid.

Everything was bigger. The one pictured here is actually smaller than a lot of "towers," and flat-screen monitors were years away from being invented. You were chained to a desk if you wanted to surf the net.

I don't know why everything was fluorescent and bright, but...it was.

This was what we had instead of iTunes, Pandora, or Spotify.

To give you an idea, home internet is about 1,000 times faster than it was back then.

If you wanted music, piracy was an option, but it came at a cost.

In addition to the ethical problems with stealing music, programs like LimeWire would overheat your computer and send you as many viruses as they would songs.

People actually went out of their way to create this "hacker" language.

It seems cheesy now, but...well, it seemed pretty cheesy then, too.

MSN Messenger was one of many programs we'd use to chat.

You could be on it for hours per day. This was before texting, remember.

If you used this program, ICQ...

...you would have to remember or write down ridiculously long numbers to log in.

Google Maps wasn't on our phones.

So we'd plan ahead and print out Mapquest directions. On paper. Like cavemen.

Even getting a single photo took a tremendous amount of patience.

If you got stuck, you'd have to start all over. It was painful.

People didn't know what to do with websites.

So they made pointless ones like this. Think of it was the digital form of doodling.

Even the biggest websites in the world looked pretty low-rent.

It wasn't until we got more sophisticated that we demanded better Web design.

Since transmitting large files was impossible...

...anything that was bigger than a few megabytes required those CD-ROM discs, which wasn't a problem because they were always being sent out by companies!

The Internet even had a manual.

I'm not sure what we needed the manual for, but the kid on the cover seemed to be having a good time, so we took the plunge.