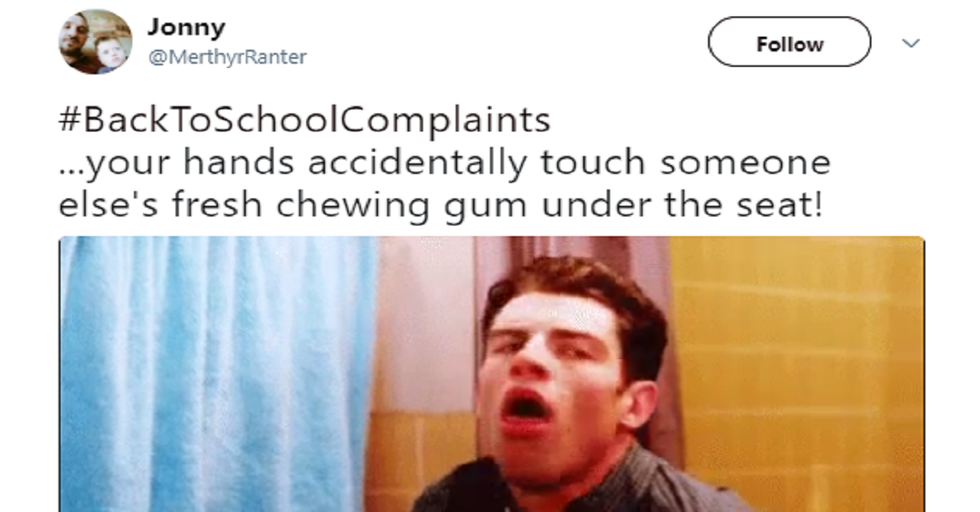 If you've been out of school for a while, you may have forgotten that it's back-to-school time for a large portion of the population.

Students and parents alike have taken to Twitter to voice their displeasure with back-to-school season, and we can't help but laugh — especially when we're not the ones heading to class!

School hasn't even started and some people are already dreading it.

Buckle up, kids. Life only gets harder.

But if we stop being crusty old adults for a second, we can definitely relate to some of these.

Like this one. It used to seem like every year school would start earlier and earlier, and I was always checking when the last day was.

Like most people, I couldn't wait to get out of school.

And suddenly I found myself "sick" a lot during the school year. It's crazy how teenagers never get sick during the summer!

A common complaint among students is the attainable work-life balance that they're supposed to have.

I was lucky if I did all of those things in a week — let alone in one day. Maybe (probably) I was just a bad student, but I sure don't remember school being that hard.

One thing everyone can agree on: The worst part of school is being forced to be around the same jerks all day, every day.

At least when you're an adult, you can choose with whom you spend your time. It's even worse when teachers get involved.

There's nothing like being forced to meet strangers that you'll probably never see after these four years.

It does get better after high school (in the sense that you choose who you spend time around, for the most part).

Why were we so concerned about what to wear on the first day?

As important as first impressions are, just remember that you'll probably never see any of these people ever again, so it doesn't really matter.

Complaining about school food, though, is completely and totally valid.

That is hardly an exaggeration. I never understood why most schools serve such garbage to growing kids. Except burger day. Burger days were the best.

Buying school supplies is always fun — unless you're the one paying for them.

If you're a kid, then it's the one time of the year you can pretend to be organized with your stuff (until it explodes into chaos like most kids' backpacks did).

You will eventually lose everything you just bought, though.

Probably sooner rather than later, too. Even parents started getting in on the back-to-school complain train, and it was hilarious.

There is a Kermit GIF for every emotion.

Including the where-did-all-these-people-come-from-at-7-am emotion, apparently. (That's an emotion, I promise.)

This one goes for both parents and kids: No more sleeping in.

Now that I'm older and (arguably) wiser, I've really learned to appreciate sleeping in. Looking back, that was probably my favorite thing about summer time.

Something I didn't think about: Back-to-school season means it'll soon be the holidays.

Which is good or bad, depending on how you feel about the holiday season.

Every year before school starts, parents have to fill out a ton of forms for their kids.

But that shouldn't be a surprise to most adults. Life is nothing if not a long series of paperwork.

The single best part of being an adult though...

...No more gum on the bottom of your chair! I will never take that for granted again.