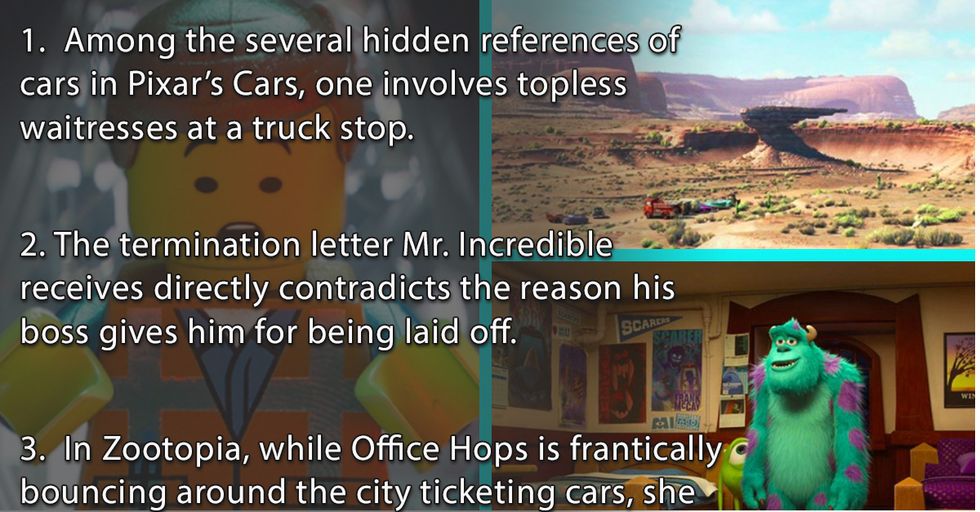 Some people aren't content to just sit back and watch a movie.

No, apparently, there are people out there who watch movies frame-by-frame with a magnifying glass in their hand to make sure they don't miss a single thing. And it's a good thing they do because those cinematic super sleuths provide us with some of the most mind-blowing information that the world has to offer.

Here are 15 details you almost definitely missed in your favorite animated films:

1. Take a closer look at this billboard from Cars.

It advertises "convertible waitresses." Weird, right? Of course, once you remember that all the creatures in Cars are, well, cars, it makes way more sense. Convertible. As in topless. There's also a scene in the movie when two girl cars flash their headlights at Lightning McQueen. For shame, Pixar.

2. Here's another detail from Cars:

See those canyons? They're cars, too. (This is a very cool detail, but it does leave me so many questions about how life works in the Cars universe. Which cars are alive and which ones become mountains?)

Or should I say, "Sid from Toy Story 3"? 'Cause that's the same person, folks. I can only imagine that Sid continued his weird obsession with mismatched Frankentoys that he found in other people's trash. It's the perfect profession for him, really.

4. See that motivational poster above Randall's bed in Monsters University?

Fans of Monsters Inc. might recognize the "winds of change" phrase — Randall taunts Mike Wazowski with that very same quote.

5. One more Pixar movie detail. This is from the opening credits of Toy Story 2:

The cluster of stars within the red circle form the outline of the classic Pixar lamp. (If you're having trouble seeing it, here's a picture that shows it a little clearer.) Now for a fact about The Incredibles...

6. You might remember that when Bob (aka Mr. Incredible himself) is laid off at the beginning of the movie, his boss tells him that he's been hurting the company's profits. But check out the letter Bob picks up as he leaves:

It's tricky to read, but that final paragraph starts off with:

"The Board of Directors at Insuricare wishes to thank you for your selfless sacrifice through this time of financial uncertainty. It is because of you, the employee, that Insuricare has recorded its highest profit in years."

7. Here's a fact about Up that won't make you cry:

During the opening montage (which definitely will make you cry), you can see the city's buildings develop just as Carl and Ellie's love did. Just try not to think about the fact that Ellie dies and those same building developers try to kick Carl out of his house. Don't think about it. Don't do it! Aw dang it, you're crying, aren't you? Let's switch gears and focus on Finding Dory to take your mind off of it.

8. In the after-credits scene, Nemo's fish friends from the first movie are seen once again in their aquarium escape bags.

Although they've been in the bags for a while, Jacques' bag is perfectly clean. He's a cleaner shrimp, after all.

9. There's something very interesting about the call Judy receives from her parents.

They're using an app called "MuzzleTime." Get it? Like FaceTime, but for rabbits?

10. Also, Nick kept the handkerchief from his childhood Scouts uniform:

It's that kind of tiny detail that most people wouldn't most likely wouldn't even notice, but once you learn about it, you really appreciate the effort the film's creators put into it. There's one more fact about Zootopia...

12. Switching gears once again to The Lego Movie. If you examine Emmet's torso piece, there's a very interesting detail...

It's a thumbprint! This is not only a very cool detail, but also a hint to the fact that (spoiler!) the entire movie is actually from a real-life little boy's imagination.

13. Did you catch this gruesome detail in Shrek?

First, you see all three bears captured by Lord Farquaad's guards. Then, it's just Papa Bear and his sad son. What happened to Mama Bear? ...Oh. Oh, I see. Well, that's awful.

14. This character from The Spongebob Movie is eating a bowl of nails with no milk.

His tough morning meal choice is a reference to a TV episode of Spongebob Squarepants in which a character proves he's tough by claiming to eat the same thing.

15. And finally, here's the Christmas tree from The Polar Express.

It's at the center of a compass rose at the North Pole. Look closely and you'll see that every point of the compass points south. Amazing!