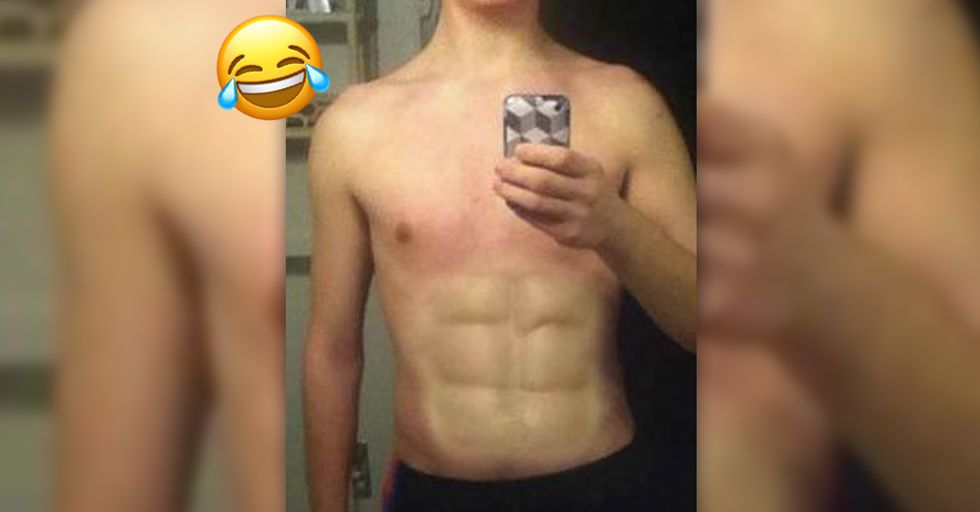 Sure, we all tell white lies from time to time. Sometimes we tell people that the traffic was terrible, the food was delicious, and we loved their gift, when in fact, these things aren't the truth at all. While telling these small untruths isn't necessarily the right thing to do, it's understandable that we do it.

But there are those among us whose lies are anything but understandable. On the contrary, they are utterly mindboggling. From inventing elaborate stories, people, and events, their content varies greatly, but so often liars share a common forum for their falsehoods — good old social media. Perhaps, they believe that the internet is a place where their bold-faced lies cannot be questioned or proven to be false, but the reality could not be further from the truth.

These 15 pathological liars' posts prove that some people just cannot keep it real on social media. Luckily, the comments show us that there are others out there who cannot help but keep it real, call them out and then shut them down. These liars' posts are on fire and they got seriously burned as a result.

1) This guy is selling some major BS on Facebook, but nobody's buying it.

Okay, let's take a moment to really break this down. So, he "just checked Facebook for the first time in almost a week," yet once called out, he admits to posting over a dozen times in the past week. According to this guy, posting on Facebook doesn't count as "checking Facebook," as long as one does not check their notifications. Confused? Us too.

Apparently, we never received the Facebook manual of B.S. rules, loopholes, and excuses to be condescending to one's "friends" while simultaneously mastering the fine art of hypocrisy. And while this guy doesn't know when he'll get back up on his Facebook high horse again, we're giving it a solid 5 minutes.

Same outfit, same room, and she did not even attempt to switch positions to create this epically unbelievable before and after shot of her "weight loss" journey... if you can call inflating two acorn-sized air pockets in the sides of your cheeks and then immediately sucking them in again like a Dyson vacuum and channelling your worst Kate Moss a "journey." However, she did attempt to mess up her hair in between the back-to-back pics to make it look like they were taken on different occasions, say 6 weeks apart. Too bad she did a terrible job switching hairstyles. As you can see the exact same curled piece of hair sits on her shoulder untouched. But we didn't really need to do an investigation to catch this social media subterfuge.

Cleary, she's full of it.

14 pounds in 6 weeks huh? And all in your cheeks! Now that is impressive. Yet we have a strong sense that her "weight loss journey" wasn't quite 6 weeks long. Try 6 seconds. But be sure to stay tuned for her "How-To" vid, which you can prepare for by collecting some acorns from your local park. It will be utterly and completely non-life changing. Can't wait.

3) This girl attempted to play the "poor me" card online...

Well, she tried. But her mom called her bluff and shut her down faster than you can say "boo hoo." Hey, little news-flash for ya sister... If you didn't know that you were poor growing up, then you weren't poor growing up. It's not a fact that is lost on one throughout childhood and then suddenly discovered on a date with "a guy from the suburbs," whatever the hell that means.

In fact, her mom pretty much dragged her butt straight off the internet and up to her room.

We're pretty sure this post was this girl's way of letting everyone on Facebook know that she's is dating a rich dude. What she didn't expect was that her blatant bragging would lead her to be publicly SHUT DOWN by her mom.

4) This Facebook fibber's impromptu engagement was truly a fantasy.

Not like the fairytale kind.. more like an actual delusional fantasy. And while the Facebook announcement might appear to come as a shock to the people in her life, turns out the people who know her well were not that surprised by her lies.

Her "friend" really said it all in two simple words, and we have to give her credit as we couldn't have said it better ourselves. "Please stop." While we're hoping she's taken her ex-friend's solid advice, we don't see this girl becoming forthright on Facebook, or anywhere else for that matter, anytime soon. Maybe she should invest the time she spends inventing Facebook fiances into a twelve step program for pathological liars.

5) This Facebook fibber tried to save face for getting fired but ended up facing the music instead.

Did the lazy lump actually attempt to play the part of a chivalrous knight in shining armor as a completely spurious scapegoat for his slacking on the job? Yep. He did. Besides exploiting the serious issue of sexual harassment in the workplace, this Facebook fabricator had the nerve to pre-accuse his employer of spreading lies when in fact this shiftless sloth was the only one falsifying factuality.

Pride goeth before the fall.

How one can even consider posting lies of this level knowing that they are friends with people who know the truth of the situation is completely mindblowing. Like, did he really not see that coming? The funny and sorta sad part about the whole thing is that this guy could have simply kept his mouth shut after getting fired and no one would have known, cared, or questioned his performance. But no. Big mouth storyteller over here had to make up an epic whopper to save face and bolster his bruised ego. Man, did his co-worker shut this guy up and fast. He served him up some serious truth and downright destroyed him with one comment. But this wannabe hero was totally asking for it.

6) Finally, a six-pack in one week is possible.

Well at least it is according to this guy, who sounds a little defensive right off the bat.

Skin is off color due to hard hours put in daily.

We recommend putting some of those hard hours toward your improving your photoshop skills because this pic is all kinds of wrong.

Besides the "off-color" and impossible timeline, something else was off with this guy's overnight abs.

We couldn't put our finger on it until this commenter hammered the final nail into the coffin.

You have no bellybutton.

7) These sunglasses have never been worn... with a few exceptions.

"Never been worn," ay? Not your shape, you say? Your profile pic says otherwise, sir. False advertising is a crime, and so is that dirty ass car of yours. Cut the crap and get a car wash while you're at it.

Apparently, this lady got a few "much-needed cocktails" in her system and decided to kill two birds with one stone. She successfully offended both her friend and her boss with one swift click. Not to mention, she showed them both that she's full of baloney.
Perhaps she needs to step away from the bar, put the phone down, and call it a day.

9) When it comes to this guy's lies, we don't want to know the truth.

This girl's version of her Friday night tends to conflict with reality. Pumping music, flowing drinks, and looking fine versus watching TV, laying in bed in pajamas, and discussing TP.

Her friend seems just as confused as we are but managed to still clarify one thing for us; her friend has quite the imagination. Maybe she should spend her Friday nights at home writing a novel instead of posting fiction on Facebook.

11) While she claims she's not a Belieber, she's clearly a bull-shitter.

12) This guy's past showed up just in time to shut this him up.

He must have only been talking about OTHER people's lies. He didn't exactly have a whole lot of material to defend his post.

Oooh, good one. Face it, dude, you burned her and now it's your turn to go down in Facebook's flames.
She knew one day the opportunity to call this cheater out would present itself. She just didn't know that she'd be able to publicly humiliate the hypocrite in the process. Well played.

13) We don't know if this guy's lies are really sad or really funny.

The fact that he doesn't know how to properly post his lies thus posting his own love note to himself on his own wall is pretty damn funny.
But the fact that he needs to tell himself that he is "very handsome, nice, and intelligent," is kind of sad. Let's just hope this guy can find a better way to boost his confidence in the future because this method was clearly counterproductive.

14) This guy's attempt at photoshop when up in smoke.

While obviously trying to appear cool to his friends on Facebook, this guy's photoshop fail made him look anything but hip. Besides revealing that he's not exactly a pot-smoking rebel, they also know that he's terrible at editing photos. Don't do drugs, dude. Also, don't quit your day job.

15) This lady has one talented dog or she is just as full of it as her couch pillows.

This lady's told the truth about one thing and one thing only. Clearly, this was NOT her dog's fault. Unless your dog has a past in the circus where he unzipped people's purses and pants, then you actually unstuffed your own couch pillows and posed this scene merely for this failed post. Now that's quite a production for some public humiliation. But do us a favor. In the future, leave your innocent dog out of it. By the way, he's onto you.