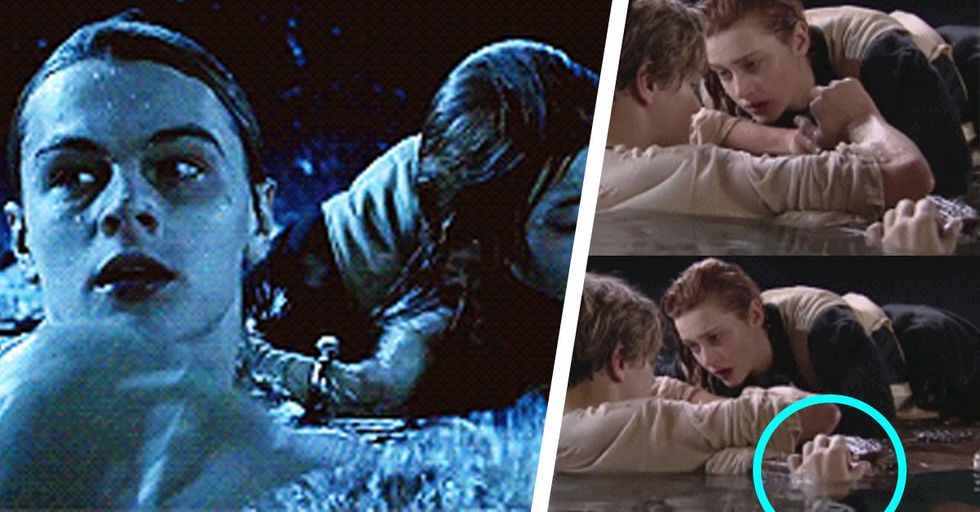 If you can believe it, the film Titanic is 20 years old this year. Yeah, we know. It's insane.

You may remember the frenzy that surrounded the film back in 1997. People attended screenings multiple times and you couldn't go anywhere without hearing the iconic flutes from "My Heart Will Go On."

Now, you may think you know the film like the back of your hand. You can quote every line from "It's been 84 years" to "Rose Dawson," but there are definitely a few things you don't know about the movie. Luckily for you, we've compiled 15 of the most interesting facts on Titanic that the Internet has to offer.

1. James Cameron has joked that his true reason for making the film is that he wanted to visit the actual Titanic shipwreck.

In fact, in order to get footage of the ship's actual remains, Cameron's brother and Panavision worked together to create a deep-sea camera system that would allow them to film from outside their submarine.

2. There actually was a Titanic passenger named J. Dawson.

Although Cameron intended Jack and Rose to be completely fictitious, he learned about the real J. Dawson after the script had already been completed. J. Dawson (actually Joseph Dawson) worked on the ship as a trimmer. He died aboard the Titanic and his body was later recovered and buried at Fairview Lawn Cemetery in Nova Scotia.

3. This couple who shares a heartbreaking kiss was based on real-life couple Ida and Isidor Straus.

They were the owners of Macy's department store in New York. At one point during the actual Titanic's sinking, Ida was offered a space on a lifeboat. She refused to board the lifeboat and leave her husband behind, saying, "As we have lived together, so we shall die together."

4. When Kate Winslet met Leonardo DiCaprio for the first time before shooting, she flashed him.

She knew that she'd have to perform naked in front of him and decided to get any awkwardness out of the way by flashing him immediately.

5. Speaking of that famous drawing scene, this was actually a flubbed line:

Jack was supposed to say, "Lie on that couch." Instead, he misspoke and said, "Over on the bed...the couch." Director James Cameron liked the mistake so much that he left it in the film as-is. Now for a fact about the drawing itself...

In fact, they're the hands of James Cameron! Is there anything that guy can't do?

7. In the scene where Cal and Rose have coffee together, actor Billy Zane's table flip was completely ad-libbed.

Obviously, Kate Winslet wasn't expecting the table she was at to be flipped. Her surprised reaction is completely genuine.

The script originally called for Rose to stab Cal with a hairpin. The spit really takes it to the next level, right? In the scene where Jack teaches Rose how to spit, the actors used egg whites instead of actual saliva. For this scene, however, petroleum jelly was used. According to Billy Zane, they had to do so many retakes of Winslet spitting on his face that eventually, it didn't faze him at all.

9. Jack shouting, "I'm king of the world!" was yet another ad-libbed line.

10. On the final night of shooting, someone dosed the clam chowder that was served to the entire cast and crew with PCP.

80 people became ill and more than 50 were hospitalized due to hallucinations. When James Cameron realized he had been drugged, he forced himself to vomit. Bill Paxton reported feeling listless for a full two weeks after the incident. The person (or people) who laced the clam chowder have never been identified. Next up: the hidden detail behind the film's run-time.

11. All of the scenes which take place in 1912 have a total run-time of two hours of forty minutes, which is exactly how long it took the Titanic to sink after it struck the iceberg.

Also, the actual Titanic's collision reportedly lasted for 37 seconds. That's also the exact length of the collision scene in the film.

12. The piece of wood that Rose floats on at the end of the movie is based on an actual artifact that survived the ship's sinking.

The artifact is currently on display at the Maritime Museum of the Atlantic in Halifax, Nova Scotia, Canada. Interestingly enough, the artifact actually had to be recreated in a larger size in order to float while Kate Winslet was on top of it. So much for the theory that Jack could have fit on it, too!

13. Céline Dion hated the song "My Heart Will Go On" the first time she heard it.

She only agreed to record the track after her husband persuaded her to do it. She recorded the version used at the end of the film in only one take. Actually, James Cameron didn't want the song in the film, either. Composer James Horner secretly arranged the song along with lyricist Will Jennings. After Horner played Dion's demo for Cameron, the director loved the song and agreed to include it. The song then went on to win the Academy Award for Best Original Song.

14. James Cameron only changed one thing about the film for its 2012 3D release.

Upon seeing the film in theaters, astrophysicist Neil DeGrasse Tyson noticed that the stars shown in the film were not accurate to the time of year and location of the Titanic's voyage. He sent James Cameron a snarky email pointing out the error which was fixed in 2012.

Originally, the studio wanted to cast Matthew McConaughey. Johnny Depp and Christian Bale also both auditioned for the role, but it ultimately went to DiCaprio on James Cameron's insistence.