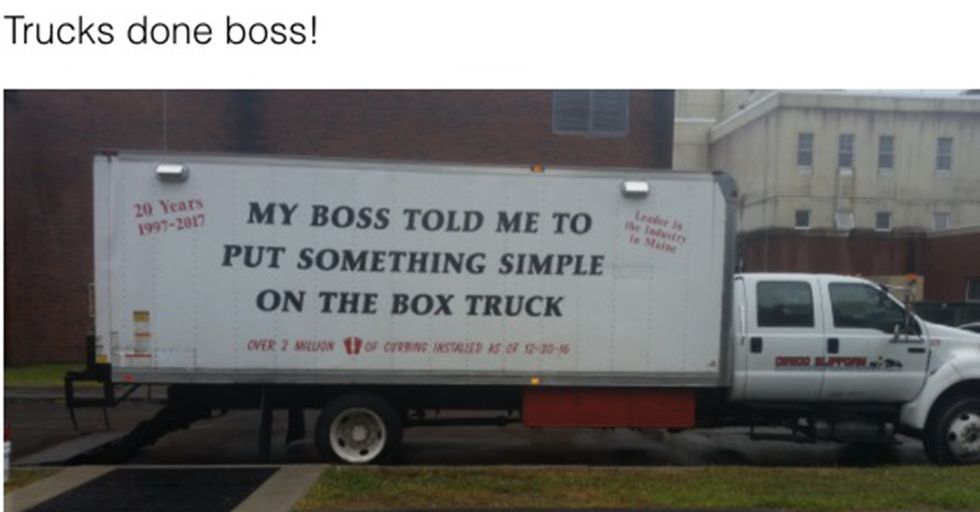 15 People Who Will Never, Ever Win 'Employee of the Month'

We all make mistakes on the job, and if you're working hard an trying your best, there's no shame in that.

But when the mistakes are this glaring and absurd, it means the employee is either way under-skilled or just plain lazy.

Either way, we're gonna guess that most of the employees who made these mistakes got the boot.

Oh, right. People could get electrocuted. That minor issue.

We're not sure that's the optimal placement.

Why do her eyes look like she's scheming something truly awful?

We feel like there are Mutant Ninja Turtles down there.

Or, maybe it's a gateway to Narnia. Or, maybe something way scarier lives down there. Who knows!

But... what happens when the grass grows out?

This one is truly a mystery. Why would someone do this? Dyslexia is the only sane explanation, but on the other side of the coin, it could be a sociopathic madman.

How many people miss their stop because they couldn't find their button in time? How many gave up in anguish and just lay down on the floor of the elevator, whispering "Goodbye, cruel world"....? But we've only just begun our journey. Let's keep going.

...but it's also not terribly helpful. Also, what's it standing on?

If one door is good, then two doors must be..."very good?"

It seems like a lot of people had to screw up for this to happen. Nice team effort!

They say a chain is only as strong as its weakest link, so this chain is like.... strong enough to hold paper?

Probably not gonna withstand a strong gust of wind.

At the very least, pics of the truck are making the rounds online. That's called viral marketing. You're a genius!

This sign actually gave better advice than it originally intended.

"Don't get shot," is sage advice, flu season or not. Now, are the next pics lazy or brilliant?

That sure was an easy assignment. What's next, boss?

Well, that's the last time Ricky gets to write and proof the flyers.

Handrail to the heavens.

That is one aspirational handrail. Also, it's really more of a "hand ramp" than a "hand rail."

Someone was trying to show they're an overachiever by not stopping at just the curb.

This extra effort won't be forgotten when it's time to hand out promotions. Have you seen any epic fails in your workplace? Share them with us on Facebook!