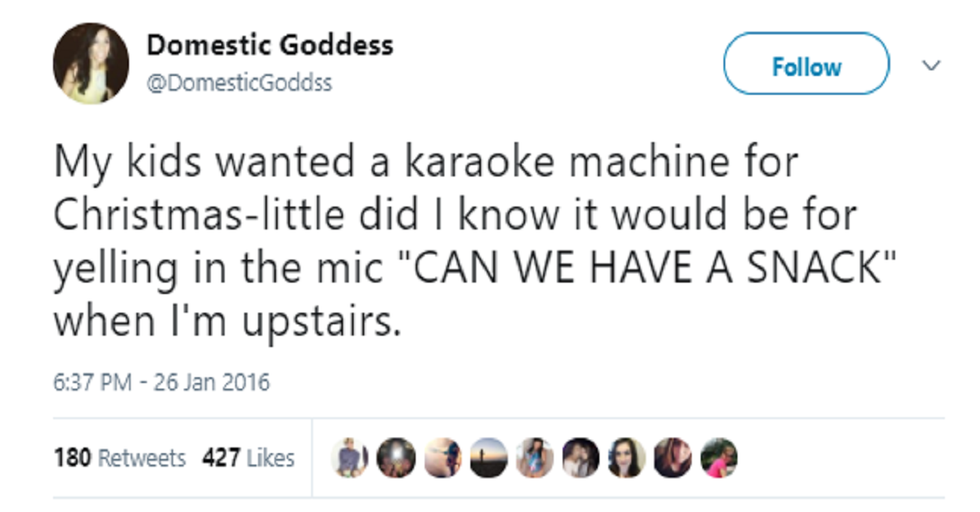 Kids are wonderful. They have such pure imaginations, innocent, angelic faces, and they give us hope for the future.

But kids can also be terrible, loud, and annoying. Parents have taken to Twitter to vent their child-raising frustrations.

Here are some of the best tweets from beleaguered parents.

It can be great when your child is passionate and strong-willed.

But it can also be a nightmare. Especially in grocery stores, movie theaters, doctors' offices... Really any public place.

And speaking of movie theaters...

How come kids never have to pee until the film starts? Without fail? Every single time? At least kids are consistent.

Kids aren't all bad, of course, but sometimes their actions can have unintended consequences.

Well, at least this kid told his mom. That's better than finding pee in the wrong place later, right?

If you're a parent, you better be ready to hear your children repeat themselves a million times.

Sometimes children will ramble on and on when telling a story.

But you could say the same thing about elderly people. Heck, now that we think about it, a lot of these apply to old people too... Like this next one...

Are we talking about a small child or a grandparent?

A child's logic can be extremely faulty at times.

But at least it's usually rooted in good intentions. It's just not always, well, logical.

Children have such pure intentions behind their choices. It's really adorable.

But every now and then, there is just a slight misunderstanding... like with the exact definition of "privacy."

Nothing like an innocent question from your kid to throw you spiraling into an existential crisis! Kid have great power, as you will soon see...

When they're not asking about the purpose of life, they're hiding all your household products.

Why is everything a scavenger hunt? We should not find our keys in the dog bowl, but when you have a kid, that's kind of par for the course.

At times, there is just no winning against a child.

Even some adults are like this. They ask for something, and when they get it they whine and complain. (Sounds an awful lot like a certain segment of a certain political party...)

Children are often funnier than we give them credit for, though.

Not sure why this is so amusing. But it is!

Persistence is the name of the game for many kids.

As a parent, you have to just try and weather the storm. And remember what you had to say...

Sometimes, when nothing is enough...

You just have to start screaming too. Hang in there, James.

It turns out, kids never stop being jerks.

Even when they reach their college years. But you wouldn't change it for the world, right parents? Kids, in all their dirty, evil glory, are still the light of your life.