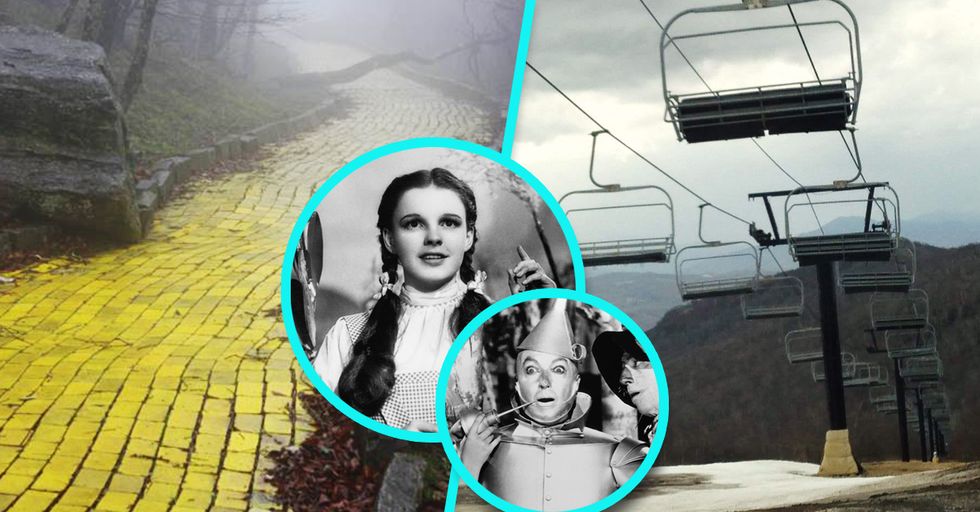 The idea was for people to have an entire Wizard of Oz experience with themselves playing the role of Dorothy. They could walk down the yellow brick road, be tossed around by a (fake) tornado, and finally end up in the Emerald City.

In its first year, Land of Oz was the top attraction in the southeast region of the United States. Unfortunately, it didn't enjoy the same level of popularity in the years following. In 1980, the park closed its doors to the public.

Even in its heyday, you can't deny that the park was a little creepy.

The park workers would put on the "Magic Moment Show" (pictured above) every half hour. Every. Half. Hour. Imagine that being your job. Anyway, that doesn't happen anymore. Let's see what the park looks like these days, shall we?

Here's what you see as you near the park entrance.

And here's a lovely gate emblazoned with the word "OZ." What could be behind it?

Aaaaaand I think we've seen enough. Even if it wasn't covered in fog, this yellow brick road does not look like something that will lead you to a magical wizard who can solve all your problems. But at least the trees aren't too spooky.

Never mind. I take that back. Who thought this was a good idea? I demand an answer. It kind of seems like there are spooky things everywhere you look in this park...

Is this jail? For birds?! That's not even in the movie! It seems like this is something that was added solely to spook park guests. And it's working. Repeat after me: I do believe in spooks.

While walking along the (terrifying) yellow brick road, you might come upon the Tinman's little house. I guess it's nice to see that he got a home to go back to after that whole Emerald City adventure.

The Scarecrow also has himself a little place. No word on whether the Cowardly Lion got the hookup. He's probably being king of the forest.

Apparently, these stone people are supposed to be the munchkins.

I have to admit I'm a little confused about the proportions, here. But I'm also too terrified to want to find out more. If you go to the park today, you'll see an abandoned ski lift. But back in the '70s, the lift wasn't used for skiers...

It was refurbished into a makeshift hot air balloon ride. OK, that part is actually kind of cool.

Dorothy's house is also on the property.

Apparently, you can see the Wicked Witch of the East's legs trapped under the house. Good. That's exactly what you wanted to hear, right?

There's actually a somewhat happy ending to the story of the Land of Oz theme park, though. In the late '90s, former employees of the theme park started reuniting on the park grounds once a year.

They've since opened their reunion weekend up to the public. It's called the Autumn of Oz and it takes place in the first weekend of each October.
The yellow brick road looks about 1,000 times better after a fresh coat of paint and cheery flowers planted nearby. And no super creepy fog. That helps too.

So even if the park looks a little creepy in the off-season (and it does), it's nice to see that it hasn't been completely forgotten by the those who care about it.

But you're never going to see me there.