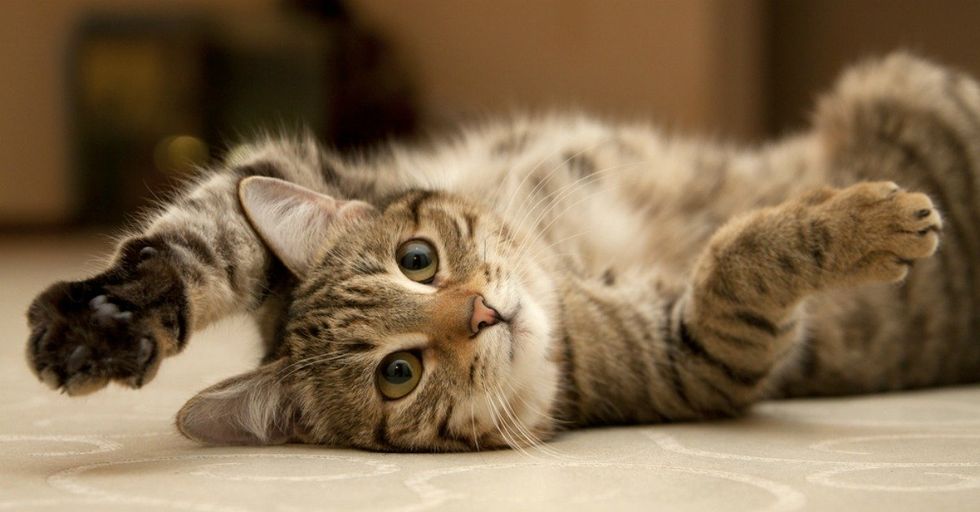 It's not news to anyone that cats are strange creatures. The slinky felines have taken over our homes and our Internet memes. They spit up hairballs, poop in boxes, and sleep 16 hours a day. And somehow, these traits make them desirable pets.

Their everyday habits are bizarre enough, but there are some lesser known facts about cats that are sure to make you go, "Whaaaaa?" and give your kitty some serious side-eye. Ready to be surprised? Snuggle up with your cat and start scrolling.

Cats sweat through their paws.

Cats are, as you know, covered in fur (except for this guy!), so they don't really have sweat glands. So when cats become overheated or frightened, they sweat through their paws. They can cool themselves off by panting (though that's usually more stress-related) or licking their fur. If you see a bunch of little watery paw prints on the ground, follow them to the sweaty kitty!

Cats and umbrellas have a lot in common.

We've all heard that cats always land on their feet, right? And we've all thrown a cat out of a window to test this theory, right? Right?* Well, to a certain extent, it's true. Cats have a righting reflex. When a cat begins falling, he will rotate his head until he's facing right side up, then he'll arch his back, position his legs under him and fall softly, spread out like an umbrella. In fact, it has been found that cats that fall from greater heights (even more than five stories) generally suffer fewer injuries than those that fall from just a few floors up because they have a longer time to right themselves.*** *Don't actually throw a cat out a window. Even if it lands on its feet, it will never forgive you.** **No, I do not know this from personal experience. ***Again, do not test this theory.

A group of cats is called a "clowder."

Purring can heal their bones.

This may be the craziest fact of all, but it's true. Yes, cats purr when they're happy, when they're relaxed, or even sometimes when they're stressed. But, and here's where it gets insane, domestic cats purr at a frequency between 25 and 150 Hertz, which according to Live Science, "happens to be the frequency at which muscles and bones best grow and repair themselves." That's right — many believe that cats naturally evolved their purr over time as a healing and survival tactic. Biology is wild.

Cats can drink straight from the ocean.

This must be why they're so angry all the time. Guaranteed your cat would never hiss again if he could just taste a Tootsie pop, but nope. Cats can't taste anything sweet.

Whether you have an indoor or outdoor cat, don't worry if it chomps on some grass and then barfs all over your yard. I know — sounds gross — but it's actually quite normal. Cats are so carnivorous that they lack the enzyme necessary to break down vegetable matter, i.e. grass. So after your cat ingests some that green stuff, chances are she will hurl. But throwing up helps eliminate all the indigestible matter that's been stuck in your cat's digestive tract (fur and bones and feathers, oh my!), which ultimately makes your little kitty feel much better.

Since about 1955, Disneyland has used cats to catch rodents and other unwanted vermin who've tried to make their home at the happiest place on Earth. This makes it extra tough for the cast members who play Mickey and Minnie. In addition to having to don huge, hot suits, they have to fend off killer cats who are always after those mice.

Cats bring you mice because they think you're dumb.

OK, OK, it's not quite as simple as that. Basically, cats are natural hunters. Even though they've been domesticated for thousands of years, they just can't seem to shake that need to kill. And in the wild, cat mothers teach their young how to eat and hunt by bringing home dead or injured prey. Domestic cats do the same thing, only you're their young. As a cat owner, you've made that little kitty your family, and so she tries to teach you how to catch and eat food by bringing you dead mice. And you never learn, do you? So your cat keeps doing it because she doesn't know that mice aren't food to you. She just thinks you're too dumb to figure it out on your own. Huh. I guess it is that simple.

Every cat's nose is unique. It's like a human's fingerprint.

That's right. Every cat's nose is totally one-of-a-kind, just like a human fingerprint. You can only imagine how messy it gets at the cat police precinct when they're booking a cat burglar (in this case, a cat who burgles, not a burglar of cats).

Cats can spend half their lives grooming themselves.

There's pretty much nothing a cat likes more than to lick itself. You knew that. But did you know that cats can spend up to half their waking hours grooming their own bodies?! And even then, sometimes they still look like this.

Healthy cats can get sick when their routines are disrupted.

A perfectly healthy cat can start acting sick — vomiting, not eating, pooping outside the litter box — as a response to drastic changes in their routine. So if you're moving to a new place or you recently installed a cardboard cutout of Michelle Obama in your living room (like I did in college), don't be surprised if your cat can't handle it. But really, who can keep it together around Michelle? She's a legend.

Cats are either right- or left-pawed.

That's right! Your cat has a dominant paw. You can test which paw your cat favors with a very scientific trial: Throw a ball of yarn to one side of your cat, then throw it to the other, and see which paw catches it. Just kidding. That won't work. You can usually actually tell by your cat's gender: Male cats are most often left-pawed, and female cats are usually right-pawed.

Whatever you do, don't snip your kitty's whiskers! They're not just there to make your cat look extra adorable (though they do that too). Whiskers are made of long, stiff hairs which are connected to the muscular and nervous systems of your cat. Those wispy hairs are actually highly useful sensory instruments that help cats make sense of their environment and detect changes in their surroundings. If you cut them, your cat can become disoriented and scared. And a frightened kitten equals scratch marks for you.

They're an invasive species.

Cats are everywhere. And I mean everywhere. They're so everywhere that they're considered one of the top 100 worst invasive species in the world. According to HuffPost, "On islands across the globe, free-ranging cats have caused or contributed to 33 (14%) of the modern bird, mammal and reptile extinctions recorded by the International Union for Conservation of Nature (IUCN) Red List." So you not learning to hunt mice for your cat means they keep killing them. So much so that now that whole species are going extinct. I don't mean to pin this on you, but maybe if you stick a dead mouse in your mouth every once in a while, we wouldn't have this problem.* *Do not stick a dead mouse in your mouth.