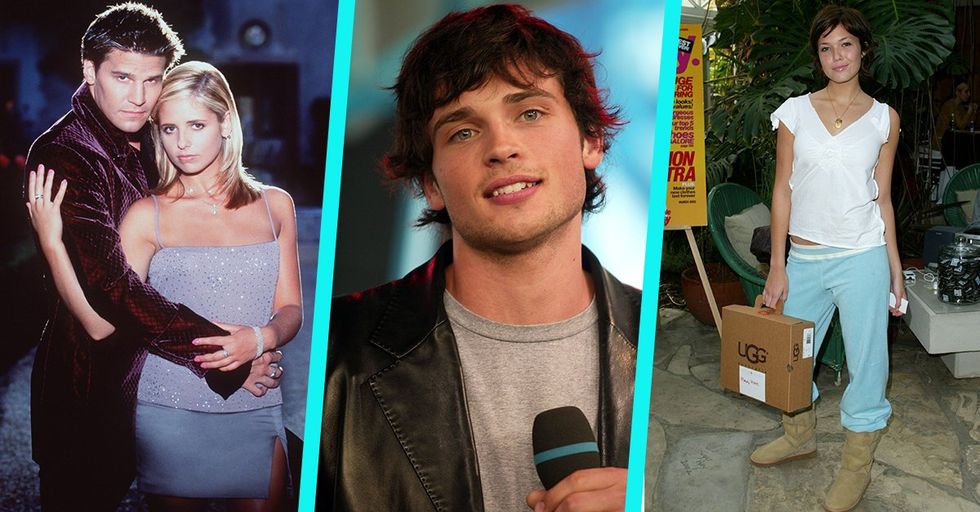 Can anyone believe it's actually 2018? Time continually flies by at a rapid pace and you simply blink and BAM: you're an adult with adult responsibilities and you crave the simpler days of Xanga and AIM messenger.

If you grew up in the '00s, this list is for you. Warning: intense feelings of nostalgia may come up when you scroll through this list. Side effects may include purchasing butterfly clips and blasting Shaggy's "It Wasn't Me" at full volume.

This hits all of the feels.

Having socks that reached mid-calf was so embarrassing. It was always important to fold your sock or cut it to prevent humiliation.

All my curly-haired girls, throw your hands in the air!

I relate to this more than anything in the entire world. Long before the trend of incredible flat-irons and hair straighteners, we mere peasants had to literally put our head on an ironing board and go to town. The results were...not great.

This scene is one us '00s babies know well.

Okay, obviously everyone still loves PlayStation. But there was just something about the early 2000's that really hits home when you think about booting up your EA Sports games.

Cascada was the soundtrack to our youth.

Should we go ahead and put that on a t-shirt? For real though, that song played on loop constantly. Whether it was at middle school dances, or at home alone in your room as you cried thinking about your crush.

It's like looking into a mirror at my own bedroom.

This is so spot on that it's almost freaky. Also, look how big and clunky that TV is. We're dying. What other things scream '00s?

Aéropostale for the win!

The 2000's were a time when emo kids truly ran the world. Nobody could stop us! Also, where were you when you realized you were mispronouncing Aéropostale?

Okay, yes, this says 2011, but this was EXACTLY what it was like in the early 2000s trying to reconfigure your blog/xanga/live journal.

Everything was so difficult and yet we did it all. Should we all collectively just go work for Google?

It's kind of scary how quickly we read that sentence.

Remember the beauty of AIM profiles? They were like coded messages.

Where do we even begin with this photo?

The choker really compliments the whole look. Everyone in the '00s was rocking this whole vibe/ensemble.

This is very specific and very true.

Let the early 2000's insults fly free! We definitely called our siblings this at some point. There are still more 2000s gems....

Fall Out Boy aka everyone's favorite band at some point.

Mid-2000s Fall Out Boy Wearing Roc-A-Fella Chains & In Photos With Rappers is one of my favorite genres of past mus… https://t.co/FYaAe1DaMg
— Hanif Abdurraqib (@Hanif Abdurraqib)1516653605.0

The straightened hair that Pete Wentz rocks is truly out of this world. Let's all go to Warped Tour!

Every single one of these photos is the most 2000's thing ever.

It's such a shame that young people today have no idea who Tom Welling is.

He was the original CW-type babe, long before Cole Sprouse came along. Those eyes! That hair! The smile!

This is maybe the most 2000's picture ever. Sarah Michelle Gellar in front of a poster of the Spice Girls wearing butterfly clips. Scatter our ashes. We're deceased.

And of course, we have to end the list with a nice box of Millenios.

Remember when we were all super stoked for Y2K? So stoked that cereal companies attempted to capitalize on it? What a wonderful, weird time it was. Let's toast with a bowl of Millenios!