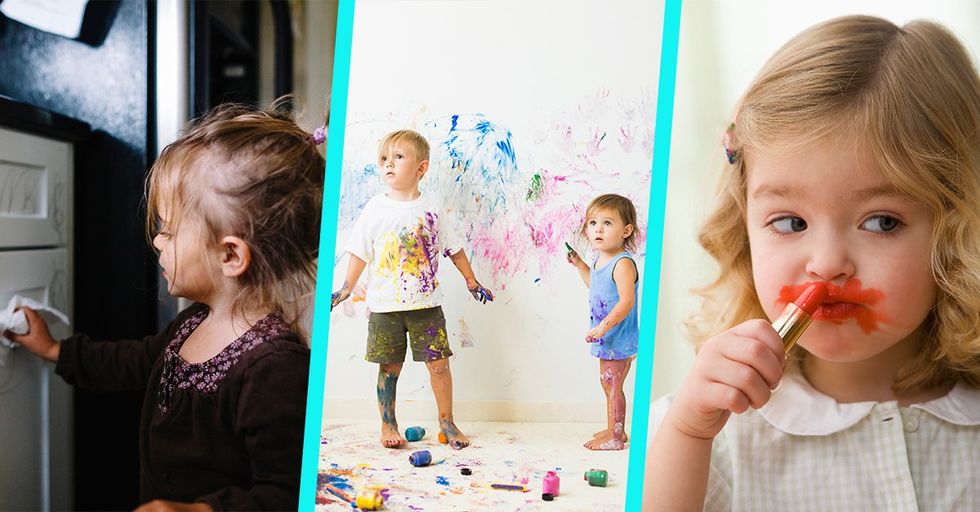 Remember the good ol' days, when you could still judge other people's parenting with a straight face? The days of freedom, filled with delusions of perfect and pin-worthy parenting? You were so hopeful. You were so naive. You were also really judgey. But now, all of your previous plans to "do it better" serve as a constant reminder that you should never judge another parent until you've walked a mile in a pair of practical shoes you swore you'd never wear.

You smiled and silently judged as you watched friends, family members, and even strangers struggle with their parenting and thought you'd somehow do it better. But considering you had zero experience, and there's no test drive in parenting, you kinda had it coming. Here are 15 things that we all judged parents for before we had a clue.

This one is a classic. Even the most reasonable non-parents find themselves guilty of this pre-parenthood judgment. You gave the judgey looks and now you are destined a decade's worth in return. Karma's three-fold, and we all know she's a B.
Your child would never be rolling around on the supermarket floor and screaming like a banshee. Yet here you are, utterly and completely defeated, in Target, dragging your hysterical child across the filthy floor.

Your kids won't be glued to the iPad or tv. No way. They'll be making homemade arts and crafts, enrolled in back-to-back classes and reading books. (Insert ridiculously loud cackling here).

But now you know.

Screen time is sanity. All hail modern technology and doing whatever it takes to pee in peace or maybe even indulge in the luxurious privilege of a 4-minute shower.

No, you weren't going to forgo the self-care once you became a parent. You'd find time to stay on top those roots and get an occasional mani/pedi. Oh, the delusions of grandeur you once entertained. Now, shaving your legs is reserved for special occasions and your self-care routine consists of brushing your teeth.

You're future perfect children we're never going to talk back to you. Your friend's child, who says "no way" and "never" constantly, was in serious need of a little tough love. You had yet to comprehend that children are not reasonable beings; they don't respond well, or sometimes at all, to direction.

So you thought you'd never co-sleep did you? All the controversy and concerns, you'd never get into that habit.
But they find you. And if you want to function like a human and not like a raging maniac sleep-deprived mombie, you do what you gotta do.

You were never going to be that flustered couple. The pair whose children were crawling under the booth table and climbing on the chairs. What a bunch of slackers, and how rude!
Except now that you're a parent, you know that every six months or so, you convince yourself that maybe this time it'll be easier and they'll behave. But no.

Remember thinking how your friend with kids seemed to always go a little heavy on the wine at dinner? You thought that maybe she had a problem? Turns out she did, two of them. Now you each bring a bottle to girl's night.

You knew before having kids that you were going to make getting back into shape a priority. What you didn't know is that you would be constantly exhausted, eating leftover mac and cheese for dinner at 11:00 pm, and would have no time to workout. It's the perfect combo for a muffin top, which, by the way, is totally the look we're all going for.

Nope. Not you. You and your hubby were going to be a team. An unstoppable co-parenting example to all. Except, you'd never parented before. And neither had your spouse. Turns out, you guys aren't always on the same page. Never saw that one coming.

You were never going to own a pair of mom jeans, sneakers, or wear nursing bras a year after stopping breastfeeding. But somehow, things don't fit the same. Priorities change. And you find yourself a walking, talking SNL skit.

I remember being a new mom and seeing a child at the store with filthy hands and thinking, "When is the last time that kid got a bath?" Now I know, he could have bathed that morning. They find dirt. Dirt finds them. There is no keeping them clean. There is only dirt, dirt, and more dirt. Did I mention dirt?

You were so sure you'd have it all. You'd effortlessly juggle motherhood, a career, marriage, and friendships and have time left over for Pinterest projects. But you had to learn the hard way, as we all must, that, sometimes, something has got to give and it can't be sanity.

Poison, you said. Your kids would eat only organic fruits and vegetables and homecooked meals, made with fresh and healthy ingredients. Only, turns out, they don't touch the stuff. And you're tired. And broke. Now, the drive-thru is a godsend. And fast food isn't poison. It's ten minutes of silence and no dishes. Sold.

Yes, you actually had the nerve to get upset with friends with kids for canceling plans. They always needed to reschedule or change things up last minute. Didn't they know that you had a life too!? While you did have a pre-parent life, you did not have any OTHER lives to consider 24 hours a day, lives which happen to be kind of dependent on you for survival. So, yeah, it's a little different.

Maybe most times you empathized and knew that you could only imagine what parents really go through. But there were times that you didn't fully get it. You just couldn't. You couldn't have known how tired they REALLY were. You couldn't have known the stress that is inherent to parenthood. You tried to understand. But now you know that every single time a friend said "this is hard," they weren't complaining. They were keeping it real. They were warning you. And thank goodness you weren't listening.